"Migrant Kids Are Child Actors": Ann Coulter Tells Trump Not To Be Fooled

Though many Trump supporters have defended the practice, no high-profile figures had questioned the authenticity of the children's experiences. 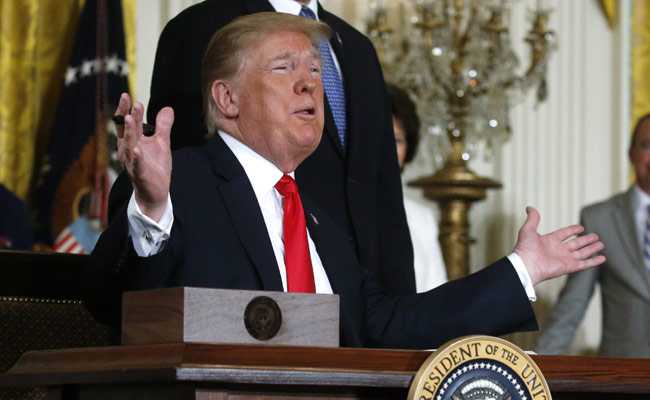 In the flourishing world of baseless conspiracy theories, this one, part hoax, part smear, has been having its moment.

The idea that people whose experiences speak to some of the consequences of government policies are not to be taken at face value and are actually crisis actors working for a nefarious purpose, has taken on particular prominence in the wake of mass shootings, such as those in Newtown, Connecticut, and Parkland, Florida.

Conservative commentator Ann Coulter became the latest figure to spread a similar claim on Sunday, as a guest on a Fox News show, when she accused some of the migrant children who have been photographed in varying stages of distress as "child actors," in a bit of messaging she directed at President Donald Trump.

"These child actors weeping and crying on all the other networks 24/7 right now, do not fall for it, Mr. President," she said, staring directly into the camera. "I get very nervous about the president getting his news from TV."

The separation of children from their parents, the result of a new hard-line immigration enforcement practice rolled out by the Trump administration in recent months, has become a lightning-rod political issue, an emotional wedge that has bled across partisan lines in the midst of the national debate about immigration. Supporters of the president have defended the practice, blaming parents for bringing their children across the border and arguing that the children are well cared for once they are taken from their parents. The president has blamed Democrats, though the practice is the result of changes made by his appointees.

Though many Trump supporters have defended the practice, until now no high-profile figures had questioned the authenticity of the children's experiences.

Instead, more information about the separations - 2,300 children have been taken from their parents since the beginning of May, around the time the new "zero-tolerance" policy was rolled out - has trickled out in recent days, in the form of reporters' visits to the detention centers where the children are held, pictures and even leaked audio. A photograph by Getty Images' John Moore of a 2-year-old crying as her mother was patted down by a border agent before the two were separated ricocheted around the media-sphere over the weekend, becoming a stand-in for what some see as the abject cruelty of the new practice.

Moore, who has been photographing the border for 10 years after stints covering war zones overseas, told The Washington Post about how he took the photo, after watching a a group of migrants cross the border in boats before being apprehended by agents.

Coulter's remarks went unquestioned by Fox News host Steve Hilton, on whose show she appeared. He did try to move the conversation forward as a break in the show approached.

"I don't know if that's . . . " he said, trailing off as Coulter continued. "I told you we wouldn't get a word in," he said to the two other guests, Republican former congressman Jason Chaffetz and Fox News host Kimberly Guilfoyle.

"These kids are being coached," she said. "They're given scripts to read by liberals. . . . Don't fall for the actor children."

She said her information was coming from New Yorker magazine, though it was not immediately clear which report she was referring to.

Over a series of emails with The Washington Post, Coulter did not provide evidence for her claim.

"If they were genuine asylees, they'd have stopped in Mexico," she said. "They'd go to Guatemala or Colombia. No, they're being marched to the U.S. as a political weapon."

In a statement provided by a Fox News spokeswoman, Hilton said: "I do not endorse her comments or anything else said by anyone other than myself."

(Except for the headline, this story has not been edited by NDTV staff and is published from a syndicated feed.)
Comments
Donald TrumpUS Immigration PolicyMigrant Children Seperation