Melania Trump was feeding the animals and gave a baby elephant a bottled formula. 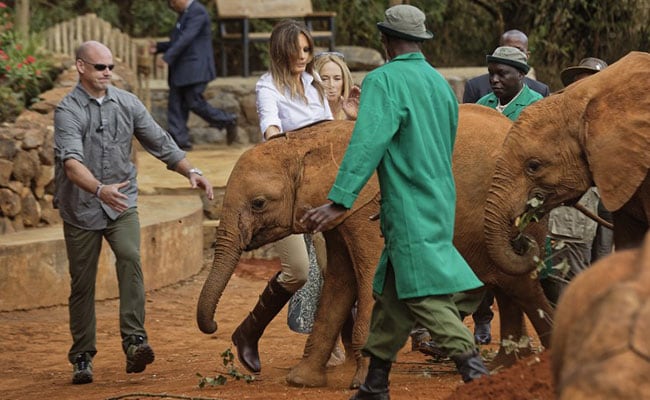 Melania Trump is in Africa to promote her children's welfare programme

US First Lady Melania Trump visited Kenya on Friday, on her third leg of a solo tour of Africa. While feeding elephants at the David Sheldrick Wildlife Trust in Nairobi, one of calves moved suddenly advancing towards her causing the former model to loose footing. She chuckled and brushed aside the incident.

She was feeding the animals and gave a baby elephant a bottled formula.

Dressed in a white shirt and beige pants, the US first lady was all smiles for the camera while at the Wildlife Trust, famed for its work rescuing the orphans from the wild.

Ms Trump then took to the Nairobi National Park and will later visit an orphanage and watch a play.

Melania Trump, who is in Africa to promote her children's welfare programme, began her trip in Ghana, where she visited mothers and their newborns.

She then made a brief stop in Malawi where she toured a primary school.

Donald Trump, her husband had tweeted on his wife's trip saying:

Our country's great First Lady, Melania, is doing really well in Africa. The people love her, and she loves them! It is a beautiful thing to see.

The First Lady's visit comes during a tumultuous time in Washington when the Trump administration is dealing with sexual assault allegations against Brett Kavanaugh, Donald Trump's Supreme Court pick.

Donald Trump had earlier in an infamous comment referred to African nations as "shithole countries."

Earlier, when Ms Trump landed in Malawi, she was greeted with "Not A Shithole" signs.