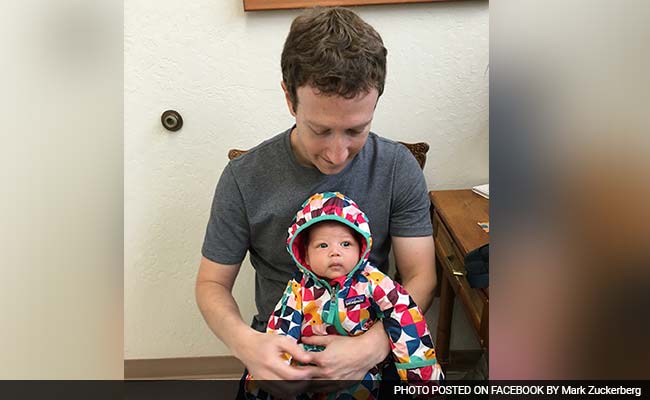 Since the Facebook CEO's daughter Max was born in December, his profile page has also been a record of baby milestones, of diaper changes and gingerbread houses.

Since the Facebook CEO's daughter Max was born in December, his profile page has also been a record of baby milestones, of diaper changes and gingerbread houses.

The latest was a trip to the doctor's office on Friday.

It is of course another milestone, complete with an "aww"-inducing photo of Max. But this one set the Internet aflame in a way a gingerbread house never could, because this post is not really about Max at all - it's about her billionaire father showing his hand in the vaccine debate.

Many of Zuckerberg's 47 million-some followers saw the post as a not-so-subtle expression of support for vaccinations, the public health matter at the center of an ongoing debate around modern science and civil liberties.

"Thanks for protecting your child, and other children who can't be vaccinated, and for supporting science!" wrote user Allison Hagood. "Adorable baby."

(A major element of vaccine advocacy is the notion of "herd immunity": an immunity that protects an entire community when a critical portion of the population has been immunized.)

Another user, Elsa Sakz, countered: "Vaccine is poison for human kind. It kills more people than it helps. I wish people don't take it as an example here."

The nearly 70,000 comments on Zuckerberg's post run the gamut of pro-vaccine and anti-vaccine arguments. On the one hand, users have pointed out, scientists credit vaccines with eliminating formerly widespread diseases such as smallpox, and severe allergic reactions to vaccinations are rare.

Yet, many Americans, including GOP presidential candidate Donald Trump, doubt the medical efficacy of vaccines and have pointed to their potential dangers. During a September 2015 Republican primary debate, Trump recounted that the 2-year-old child of one of his employees "got a tremendous fever" and "now is autistic" after getting vaccinated.

The notion that vaccines cause autism was disseminated in 1998, when a paper published by researcher Andrew Wakefield speculated that there was a causal link between the standard measles, mumps and rubella (MMRS) vaccine and the neurobehavioral disorder. The movement against vaccines was then taken up by a number of celebrities, including Jenny McCarthy and Jim Carrey.

In 2010, Wakefield's article was retracted after it was discovered that his work had been funded by parents suing vaccine companies. What's more, some parts of the paper were found to be fabricated, labeling children without autism as having the disorder.

Despite these revelations, fears persisted, buoyed by an autistic child whose parents won a federal claims case against the Department of Health and Human Services in 2008 after they said their daughter developed the disorder from five vaccines she received at 19 months old.

The case prompted dozens of studies, none of which found any "harmful association" between childhood vaccinations and autism. And, according to the Centers for Disease Control and Prevention, a serious allergic reaction to the MMRS vaccine occurs in less than 1 out of a million doses.

Some of Zuckerberg's commenters remain dubious.

"I am sorry to see you unnecessarily putting your kid at risk by responding to faux science and propaganda," wrote user Stuart Morgan Kunkle.

Others doubted that Zuckerberg had actually gotten his child vaccinated. User Matthew H. Benedict commented: "Any of you ever read the inserts on vaccines? The ingredients? I didn't think so. Zuckerberg has, and I'd bet the farm, that he has no intention of vaccinating and dumbing down his child. However, what he, Bill Gates, and other elites, wants [sic] for your children, and a whole generation, is much, much different than what they want [for] their own kids. It saddens me you people can't see how blatant this post is."

Benedict is right to assume that Zuckerberg has read up on the subject. In fact, he's weighed in on the debate before, in a post recommending Eula Biss's book "On Immunity."

"Vaccination is an important and timely topic. The science is completely clear: vaccinations work and are important for the health of everyone in our community.

"This book explores the reasons why some people question vaccines, and then logically explains why the doubts are unfounded and vaccines are in fact effective and safe."

Silicon Valley, where Facebook is headquartered, is a potent setting for the debate. WIRED reported nearly a year ago that half of the day care facilities affiliated with major tech companies in the southern part of the California Bay Area have below-average vaccination rates, according to an examination of the California Department of Public Health's vaccination database.

Following a measles outbreak that started in Disneyland in 2014 and sickened 131 people, California Gov. Jerry Brown, D, signed into law a bill eliminating "personal belief" (primarily religious) exemptions to vaccine requirements at private and public schools in the state.

Some believe such regulations have gone too far. In Iowa last summer, Republican presidential candidate Carly Fiorina said, "When in doubt, it must always be the parent's choice."