Darien Harris is challenging his conviction on the basis that neither he nor the judge were made aware during the trial that the prosecution's key witness, Dexter Saffold was legally blind. 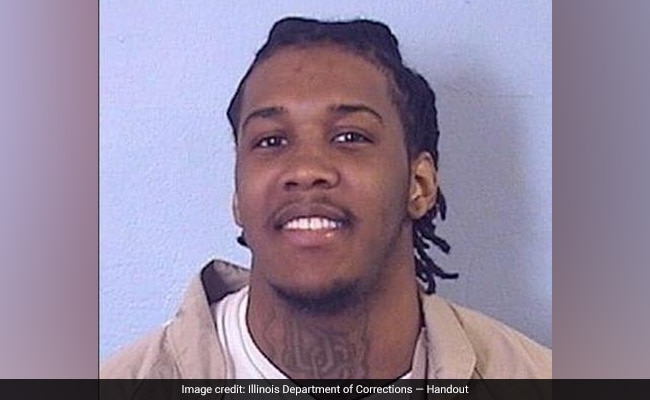 Darien Harris was convicted of murder, attempted murder and other charges in connection with the shooting

Ronald Moore was in the back seat of a car on a June night in 2011, court records say, when the car started to overheat. His younger brother, Rondell Moore, pulled into a BP gas station parking lot in the South Side of Chicago to buy antifreeze, and a mechanic took a look under the hood.

A black Lexus then turned into the parking lot and drove to the other side of the building, the records say. Then, Ronald Moore heard gunshots. Just outside the car, someone was shooting at Rondell Moore and the mechanic. Rondell, 23, tried to run away and died in a nearby parking lot.

Darien Harris, then a high-school senior, was convicted of murder, attempted murder and related charges in connection with the shooting. Judge Nicholas Ford sentenced him to 76 years in prison.

Harris, now 26, is challenging his conviction on the basis that neither he nor the judge were made aware during the trial that the prosecution's key witness, Dexter Saffold was legally blind.

A private investigator working for Harris found a 2003 housing discrimination lawsuit in which Saffold says he has glaucoma, Harris' attorney, Jodi Garvey, told The Washington Post. A letter from a doctor, attached to the lawsuit, says Saffold is legally blind and permanently disabled with "markedly reduced vision, especially at night."

Ford said during the trial in 2014 that Harris' case "begins and ends with Mr. Saffold," whose testimony was "unblemished," according to court records. The judge also said Saffold's version of events had been corroborated by Ronald Moore and by the driver of the black Lexus. Harris' case, the judge said, "was not a particularly close one."

Saffold testified at the trial that he was riding his scooter in front of the gas station when he heard gunshots, the court records say. He told the judge he saw someone about 18 feet away from him shooting a dark-colored handgun while flashes flew from the muzzle.

The shooter bumped into Saffold while he was running away, Saffold testified. Eight days later, the court records say, Saffold picked Harris out of a lineup of photos. He identified Harris as the shooter again in court.

Saffold's eyesight came up briefly during the trial: Harris' trial attorney asked Saffold if his diabetes affected his vision, and he said yes, according to Garvey. Then Saffold paused and changed his answer: "No, it does not."

Garvey requested last July that the Cook County state's attorney's office review its prosecution of the case. Saffold's statement at trial that he could see clearly should disqualify his testimony, Garvey argued in a court filing.

"Considering the fact that Mr. Saffold is admittedly legally blind, a matter he denied during his testimony, his identification is worthless," Garvey wrote.

Garvey also said surveillance video of the gas station shows someone on a motorized scooter approaching the building only after the shooter had already left the camera's view. Saffold therefore could not have seen the shooting happen just feet away from him, as he had testified, Garvey said. She said the surveillance video and other exculpatory evidence were not presented at trial.

"We have a kid who was barely 18, wrongfully convicted," Garvey told The Post. "He's had the ability to graduate high school with his classmates taken away from him. He probably would have graduated from college now."

A spokeswoman for the state's attorney's office confirmed that its Conviction Integrity Unit was reviewing the case, but declined to comment further. Harris is also appealing his conviction in Illinois Supreme Court.

Saffold told CBS Chicago that he stands by his testimony and that he had no obligation to reveal his medical history in court.

Harris' mother, Nakesha Harris, said her son was watching the NBA playoffs at home with his father when the shooting happened. Darien was recording LeBron James, then with the Miami Heat, to share with his friends, Nakesha Harris said.

Darien got the short end of the stick, Nakesha Harris said, but she is trying to stay hopeful that the state's attorney's office will find that he did not commit the shooting.

"Now that the case is getting recognition, I think that they're going to have no choice but to do the right thing at this point," Harris, 41, told The Post. "A lot of mistakes were made doing this case."