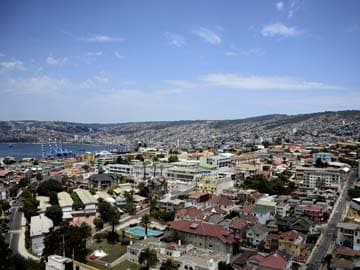 A picture taken on January 22, 2014, shows the city of Valparaiso, Chile

Valparaiso, Chile: With its colorful hillside homes overlooking the Pacific and winding stairways, the Chilean port city of Valparaiso was named a UNESCO World Heritage site just over a decade ago.

But plans to build a huge shopping mall in the center of town have some now fearing that the city's architectural charms are under attack.

Residents are deeply divided over the plans for the retail and leisure complex in Valparaiso, once Chile's main port, located 120 kilometers (75 miles) west of the capital Santiago.

Some fear the blueprint will ruin the postcard-like beauty of the city, which earned the UN cultural body's accolade in 2003. But others say hard economic times necessitate such a boost.

On the stretch of waterfront known as the Baron, one whole section is closed off with wooden walls. Work on the mall started a few months ago but has been frozen by a court ruling citing a lack of preservation studies.

In November, a UNESCO team came to inspect the old quarter of the city to see how well it is being preserved and analyze ongoing construction projects, including the mall, and their eventual effects on the city's cultural heritage, the Paris-based organization told AFP.

A report is due soon with recommendations on how to ensure the city keeps its status as one of the world's cultural gems.

"Valparaiso is a city where much remains to be done," said mayor Jorge Castro.

He told AFP the city has been a heritage site for "just 10 years," adding that while much needs to be done, other projects are under way or almost finished.

"I think that what the final report is going to show is that we have made an effort... and that we have tried to move ahead in a very complex city," Castro added.

Valparaiso got rich in the 19th century. It was the first and most important commercial port on the maritime routes linking the Atlantic and Pacific via the Strait of Magellan.

In the 19th century, European immigrants seeking a new life settled here, making it the most cosmopolitan city in an otherwise isolated country. But the city lost its appeal when the Panama Canal was built in the early 20th century.

Today, tourism is Valparaiso's main source of wealth. Visitors come to see the vestiges of a glorious but long gone past -- the port, once the most important in the South Pacific.

The shopping mall on hold in downtown Valparaiso illustrates the city's paradox: thousands of tourists visit every year, enthralled by the narrow streets of the old quarter, its antique electric or steam-powered cable cars, its tiny stairways weaving between homes perched on hills like that of the poet Pablo Neruda.

But it has a level of poverty above the national average and needs a cash infusion.

That is the lure of the $150 million invested in the shopping center and the 4,000 jobs it is going to generate, says Castro.

Promoted
Listen to the latest songs, only on JioSaavn.com
But economist Camilo Vargas, who opposes the project, complains that it "stems from a simplistic view of the city's growth."

"We feel there are more important things for Valparaiso than this mall and that there are parts of the city, especially on the outskirts, that would be better sites for it," he said.