The latest package to CNN was intercepted at an Atlanta mail facility Monday, and the FBI said it was "similar in appearance" to the other 14 they believe Sayoc has mailed to various targets recently. 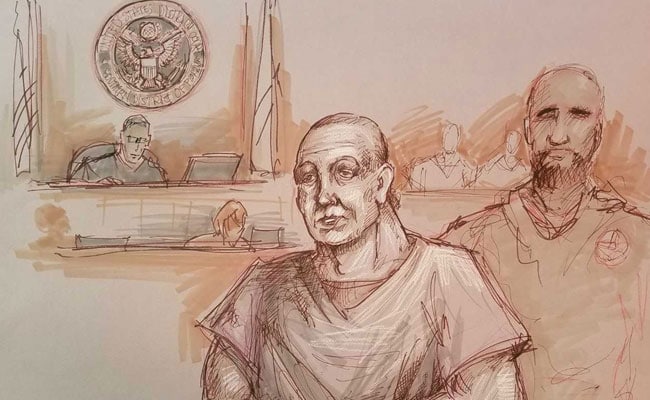 The Florida man accused of sending more than a dozen possible bombs to prominent Democratic and media figures who have been critical of President Donald Trump kept a list of more than 100 possible targets, a law enforcement official said Monday, as authorities intercepted another suspicious package addressed to CNN.

The FBI recovered the list during its investigation of 56-year-old Cesar Sayoc and has been notifying those on it so they can take precautions in checking their mail, the official said. The list includes high-profile celebrities and media personalities similar to those who already were sent possible bombs, the official said.

The latest package to CNN was intercepted at an Atlanta mail facility Monday, and the FBI said it was "similar in appearance" to the other 14 they believe Sayoc has mailed to various targets recently.

Investigators suspect he also sent the latest one and were conducting forensic tests to see if they could find a definitive link, another law enforcement official said. After Sayoc's arrest Friday, authorities warned that more packages might still be circulating through the mail system.

Sayoc appeared in federal court in Miami for the first time Monday, his demeanor relaxed as he sat behind seven other inmates who were there for other hearings. Dressed in tan jail clothes, he said his name in a raspy voice and nodded that he understood his legal rights. U.S. Magistrate Judge Edwin Torres said he would relay to jail authorities a request from Sayoc's attorneys to meet with their client at a table, instead of separated by plexiglass.

Daniel Aaronson, Sayoc's attorney, said they were hopeful to learn more information once they could meet with Sayoc in that setting.

"It's hard to talk to someone through mesh," he said.

Sayoc is scheduled to appear in court again Friday and will remain in custody at least until then.

CNN was first to report the additional package Monday, saying the latest mailer addressed to the news organization was discovered at a post office in Atlanta. Two in the previous batch were directed to CNN, one of which sparked an evacuation of the organization's offices in New York.

In a statement, CNN President Jeff Zucker said there was "no imminent danger to the CNN Center" in Atlanta. He said all mail is screened off-site, so the package would not have come there directly, even if it had not been intercepted at the post office. A CNN correspondent posted an image of the package on Twitter, showing that it appeared similar to the other 14.

The two packages that authorities say Sayoc directed to CNN previously were targeted at former director of national intelligence James Clapper and former CIA director John Brennan. Both are prominent television commentators, although Brennan is an analyst for MSNBC rather than CNN, and his name was misspelled on the package directed to him. The latest package, according to the image on Twitter, was addressed only to "CNN," not any individual there.

Authorities have said the previous packages contained possible bombs made of six inches of PVC pipe, a small clock, a battery, wiring and what authorities termed "energetic," or possibly explosive, material. They were shipped through the mail in manila envelopes lined with bubble wrap. None detonated, and it is unclear whether they could have, authorities have said.

The FBI said it linked Sayoc by connecting him to fingerprints on one of the envelopes as well as a possible DNA match from two of the devices. Sayoc, a strip club worker who lived out of a van, has a lengthy criminal past, including arrests for theft, fraud and threatening to bomb a utility company. His social media shows he was an ardent defender of the president and virulent critic of Trump's opponents. Family members and associates have said he seemed to have mental-health issues, although he rejected their pleas that he seek help.

On Monday morning, before the latest package to CNN was discovered, Trump wrote on Twitter that media organizations were to blame for divisions in the United States.

"There is great anger in our Country caused in part by inaccurate, and even fraudulent, reporting of the news. The Fake News Media, the true Enemy of the People, must stop the open & obvious hostility & report the news accurately & fairly. That will do much to put out the flame of Anger and Outrage and we will then be able to bring all sides together in Peace and Harmony. Fake News Must End!" he wrote.