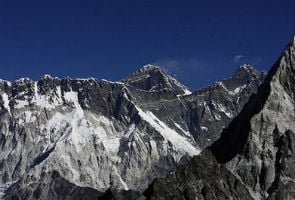 kathmandu: While the average couples plan families and buying a new car and house on bank loans, Sushma and Vikas Kaushik planned something unusual to take their love to great height - Mt Everest.

Sushma, a 27-year-old police woman from India's Haryana state and her husband Vikas, 24, an MSc student, made both climbing and social history Friday by becoming the first Indian couple to climb together to the top of the world, the freezing, gale-smitten 8,848-metre summit of Mt Everest, the highest peak in the world.

After a surreal climb all through the night, the doughty pair reached the top at 10.25 a.m., accompanied by their two Sherpa guides, Lhakpa Nuru Sherpa and Tenzing Dorjee Sherpa, said Ang Tshering Sherpa, chief of Asian Trekking, the Kathmandu-based mountaineering agency that put the Kaushiks' expedition together.

The feat comes as a surprising pat on the back for a state that has one of the highest records of the killing of the female fetus due to its strong preference for sons.

It was a day of triumph for India with four more climbers ascending the mountain as part of Asian Trekking's Eco Everest Expedition 2011.

Three of them are from Haryana as well, proving the state's grip on adventure sports. Sunita Singh Choken, 26, and also from Haryana, was the first member of the team to summit at 8.25 a.m.

She was followed by Premlata Agrawal, a 48-year-old housewife from Jharkhand who becomes the oldest Indian woman to accomplish the deed as well as the first woman from the Marwari community.

The other two summiteers, also from Haryana, are Pawan Grewal, 28, and Narinder Singh, 32.

The Eco Everest expeditions have been exceptionally lucky for the members. This month, Everest legend Apa Sherpa scaled Mt Everest for an incredible 21st time as part of the team, breaking his own earlier record of 20 summits.

A record 31 Indian climbers are attempting the peak this season, with 17 of them raising funds on their own.

Waiting for the Everest traffic to subside so that they have a stab at the summit as well is a 14-member Indian Air Force team that has eight women climbers.