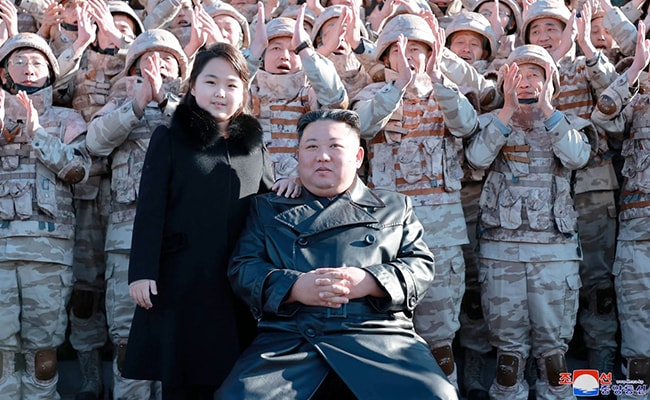 Kim Jong Un is believed to have as many as three children - two girls and a boy.

The daughter of North Korean leader Kim Jong Un made a second public appearance with her father days after her first, this time with missile scientists, soldiers and others involved in this month's Hwasong-17 missile launch. Her unexpected second public appearance has now raised speculation that she could be a successor in the making or be trained for a leadership position.

While her name and age have not been revealed, South Korea's National Intelligence Service (NIS), the country's main spy agency, told lawmakers that the daughter is Kim Jong Un's second child named Kim Ju Ae and is around 10 years old.

The new set of photographs was released by state media on Sunday. The images showed Kim's daughter posing beside her father during an event with North Korean soldiers at an unspecified location.

In one of the pictures, the father-daughter pair were seen posing alongside uniformed soldiers before a truck loaded with a large missile. In others, she was seen holding her father's arm and clapping her hands while smiling.

As per The Washington Post, during the visit, Kim Jong Un congratulated soldiers who took part in the test-firing of an intercontinental ballistic missile earlier this month. The father-daughter pair found the crowd "filled with boundless passion and happiness" as they expressed "the highest glory and ardent reverence" for the North Korean leader.

Citing KCNA, Sky News reported that during the event, Kim said, "It is the truth taught by history that only when we become the strongest - not the weak - in the present world where the strength in showdown just decides victory, can we defend the present and future of the country and nation."

He also stated that scientists and technicians should "make a do-or-die struggle... and thus expand and bolster up the nuclear war deterrent of the country at an exceptionally rapid speed".

Meanwhile, few confirmed details exist about Kim Jong Un's private life. South Korean media have speculated that Kim married his wife Ri Sol Ju in 2009 and that they have three children, two daughters and a son.

As per experts, Kim's presentation of his young daughter is a break from the precedent established by his father and grandfather. Both Kim and his father were first mentioned in state media dispatches after they became adults.