The Ohio father asked his employer, JPMorgan Chase, for the paid parental leave the company offered to primary caregivers. But he was told that in most cases, only mothers would be eligible for the full 16 weeks, Derek Rotondo said. 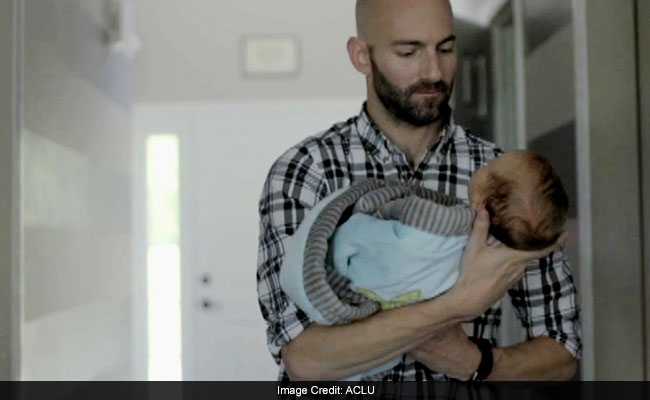 Before the birth of his second son, Derek Rotondo decided he wanted to spend more time at home - both to bond with the newborn and to more evenly split up the caregiving with his wife.

The Ohio father asked his employer, JPMorgan Chase, for the paid parental leave the company offered to primary caregivers. But he was told that in most cases, only mothers would be eligible for the full 16 weeks, Rotondo said. Unless he could prove that his wife had returned to work or was medically incapable of caring for the baby, Rotondo would only be eligible for two weeks of paid leave.

On Thursday, JPMorgan Chase said it agreed to pay $5 million to settle a class-action lawsuit filed on behalf of Rotondo and other male employees who contend they were denied access to the same paid parental leave as mothers between 2011 and 2017.

The American Civil Liberties Union, which represented Rotondo, said this marks the first settlement of its kind stemming from a class-action lawsuit on behalf of male employees claiming they were denied the same equal paid parental leave as women. The settlement also comes amid growing pressure on employers to adopt gender-neutral paid leave policies that encourage more equitable caregiving roles in the home.

"I think it sends a clear message that if a company is able to and does offer leave that it needs to be implemented equally across both genders," Rotondo said in an interview. "If Dad is able to be home with their children as well, then both parents can share the responsibilities."

After his second son was born, Rotondo did not qualify as a primary caregiver under Chase's parental paid leave policy because his wife, a teacher, had the summer off work, Rotondo said. In December 2017, after Rotondo filed his complaint with the EEOC, Chase changed its policy to clarify that both fathers and mothers were eligible for the "primary caregiver" 16 weeks of paid leave.

As of mid-2018, nonprimary caregivers are eligible for six weeks of paid leave, according to Chase. The policy also applies to adoptive parents and same-sex parents. A parent can also change his or her caregiver status if circumstances change, the company said.

"We are pleased to have reached an agreement in this matter and look forward to more effectively communicating the policy so that all men and women employees are aware of their benefits," said Reid Broda, associate general counsel for JPMorgan Chase. "We thank Mr. Rotondo for bringing the matter to our attention."

As part of the proposed class settlement, JPMorgan Chase pledged to train those administering the policy and pay $5 million to male employees who claim they were denied additional paid parental leave as primary caregivers. Chase is not admitting liability in the settlement.

The lawsuit alleges that JPMorgan Chase's parental leave policy violates Title VII of the Civil Rights Act of 1964, the Ohio Fair Employment Practices Act, and other state and local laws prohibiting sex discrimination in the workplace.

"Chase is a leader and an enormous employer, and we expect other smaller employers will take note," said Peter Romer-Friedman, one of the lawyers representing Rotondo on behalf of the firm Outten & Golden. "This settlement offers a blueprint for what can be done."

Galen Sherwin, a senior staff attorney at the Women's Rights Project of the ACLU, said the agreement also sends an affirmative message to fathers, encouraging them to take advantage of parental leave. It also carries on the legacy of Supreme Court Justice Ruth Bader Ginsburg, who co-founded the ACLU's Women's Rights Project and championed the importance of representing men as caregivers. While at the ACLU, Ginsburg believed "we weren't going to be able to achieve equality in the workplace for women unless there is equality at home," Sherwin said.

"This settlement, I think, is a milestone along that path," Sherwin added.

The United States is the only industrialized country that doesn't guarantee workers paid leave. But more employers than ever are offering paid maternity leave, and the issue is gaining momentum both in Congress and among the candidates for the 2020 presidential election. In February, a group of senators and members of Congress introduced legislation to create a gender-neutral, national paid family and medical leave program.

"In Washington today, policymakers from Capitol Hill to the White House are going to be thinking about how paid parental leave is important and should be enacted into law, but it has to be equal," Romer-Friedman said. "No one is equal unless everyone is equal."

Rotondo, who has worked as a fraud investigator at JPMorgan since 2010, said the extra time at home has allowed him to develop a closer bond with his second son, Lincoln, than he did when his firstborn was younger.

"I think all new dads especially kind of assume that babies are these mysterious, magical beings and that only the mothers can speak the language," Rotondo said. "But I found that that's not really true."

Now, when Lincoln wakes up scared in the middle of the night, Rotondo is the go-to parent who calms him down enough to fall back asleep.

"There's a reason why there's two parents involved," Rotondo said. "If families have that choice, it's always better to divide anything up by two than by one."