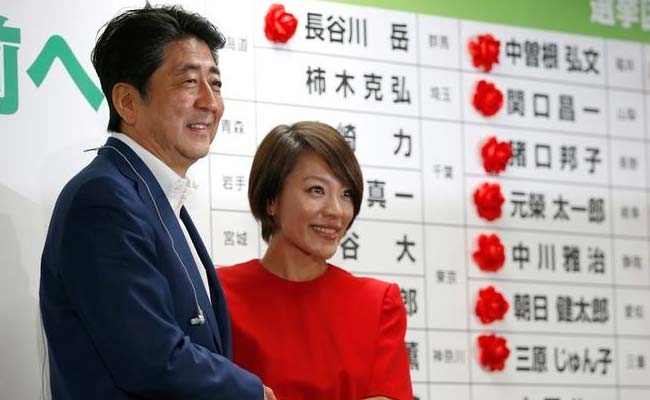 Tokyo: Japanese Prime Minister Shinzo Abe ordered a new round of fiscal stimulus spending after a crushing election victory over the weekend as evidence mounted the corporate sector is floundering due to weak demand.

Abe did not give details on the size of the package, but Japanese stocks jumped nearly 4 percent and the yen weakened over perceptions a landslide victory in upper house elections now gives him a free hand to draft economic policy.

An unexpected decline in machinery orders shows the economy needs something to overcome consistently weak corporate investment. Economists worry, however, that Abe's focus on public works spending will not tackle the structural issues around a declining population and workforce.

More public works also increases pressure on the Bank of Japan to keep interest rates low and the yen weak to make sure stimulus spending will gain traction.

The government was ready to spend more than 10 trillion yen ($100 billion), ruling party sources told Reuters before the election.

"We are going to make bold investment into seeds of future growth," Abe told a news conference on Monday at the headquarters for his ruling Liberal Democratic Party (LDP).

Japan's ruling coalition rang up a stronger-than-expected victory in Upper House elections, as voters chose stability despite concerns about Abe's economic policies and plans to revise the post-war pacifists constitution for the first time.

Abe said he wanted to strengthen agriculture exports from rural areas and improve infrastructure, such as trains and ports, to welcome more tourists and cruise ships from overseas.

"We have promised through this election campaign that we will sell the world the agricultural products and tourism resources each region is proud of," he said.

He reiterated a campaign pledge to improve access to child care and elderly care. He will also consider providing grants to students struggling with college debt.

The prime minister said he wanted to take advantage of the Bank of Japan's zero-interest-rate-policy and issue bonds for public-private partnerships.

The government will also sell construction bonds, which are earmarked for public works projects, for the first time in four years to fund part of the stimulus package, the Nikkei newspaper reported, without citing sources.

The emphasis on the tourism industry in the package is about making a long-term investment, said Hiroshi Miyazaki, senior economist at Mitsubishi UFJ Morgan Stanley Securities.

"But the recent success in tourism has been due to the relaxing of visa requirements and a weakening yen. Now that the yen is rising, the BOJ's (Bank of Japan) monetary easing needs to accompany this plan for it to work," Miyazaki said.

Some economists say public spending on infrastructure is needed to compensate for the private sector's reluctance to invest in plants and equipment.

Machinery orders fell unexpectedly in May as a strong yen and weak demand eroded corporate profits and spending plans, data on Monday showed, another sign the economy is struggling to attract the investment it needs to sustain growth.

The Cabinet Office said machinery orders are "stalling", a downgrade from April's assessment that said orders were showing signs of "pickup".

Other economists have argued the main reason Abe's policies have disappointed after more than three years in office are a lack of bold steps to liberalise the labour market and reverse a population decline.

These kinds of structural reforms are known as the "third arrow" in the prime minister's economic programme, dubbed "Abenomics". The other two arrows are fiscal packages, such as the one announced on Monday, and monetary stimulus from the BOJ.

The BOJ has kept monetary policy steady since January, when it decided to add negative rates to its massive asset-buying programme in a fresh attempt to accelerate inflation.

However, some economists think the BOJ may take some further action when it updates the Bank's forecasts at a policy meeting ending July 29.

The Nikkei share average ended at 15,708.82 points, a one-week closing high, after earlier touching its highest intraday level since June 24. The yen fell to 102 versus the dollar following Abe's resounding election win and announcement of the stimulus package.
© Thomson Reuters 2016

(Except for the headline, this story has not been edited by NDTV staff and is published from a syndicated feed.)
Comments
Japan politicsShinzo AbeJapan coalition government