Peering into the turmoil of a Cartwheel Galaxy, NASA's James Webb Telescope has discovered new information on star formation. 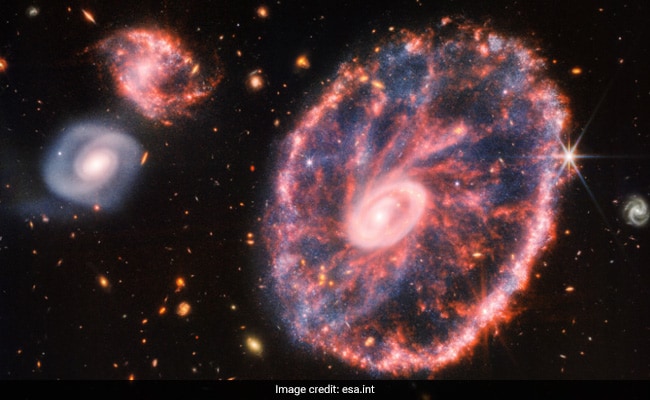 The Cartwheel Galaxy is 500 million light-years away, in the Sculptor constellation.

Peering into the turmoil of a Cartwheel Galaxy, American Space Agency NASA's James Webb Telescope has discovered new information on star formation and the galaxy's central black hole. Against a background of numerous other galaxies, Webb's strong infrared sight captured a fine image of the Cartwheel and two smaller companion galaxies. This image offers a fresh perspective on the evolution of the galaxy over the course of billions of years, according to a release from NASA.

The European Space Agency (ESA) shared images of the Cartwheel Galaxy on its Twitter handle on Tuesday and said, "Telescopes have examined the Cartwheel Galaxy before, but our view has been obscured by gas and dust. #Webb, with its infrared imaging capabilities, has uncovered new insights into the galaxy's nature."

Telescopes have examined the Cartwheel Galaxy before, but our view has been obscured by gas and dust. #Webb, with its infrared imaging capabilities, has uncovered new insights into the galaxy's nature ???? https://t.co/pczZxNjh9Y (left: @HUBBLE_space 2010, right: @ESA_Webb 2022) pic.twitter.com/yC407vXPLP

It is unusual to see the Cartwheel Galaxy, which is 500 million light-years away, in the Sculptor constellation. This dramatic event is a high-speed collision between a big spiral galaxy and a smaller galaxy that isn't seen in this image but is what provided it the look of a wagon wheel. The Cartwheel is one of several other, smaller occurrences that result from collisions of galactic scale between the galaxies involved, the space agency added.

Moreover, the galaxy's structure and geometry were significantly impacted by the collision and comprises of two rings - a brilliant inner ring and a vibrant outer one. These two rings are growing farther apart from the point of collision. The structure resembles like ripples in a pond when a stone is thrown into it. Because of these distinguishing characteristics, astronomers refer to this galaxy as a "ring galaxy," a structure that is less frequent than spiral galaxies like the Milky Way.

Huge young star clusters are seen in the brightest regions of the core, which also includes an enormous amount of hot dust. On the other side, star formation and supernova dominate in the outer ring, which has been growing for nearly 440 million years. This ring collides with the surrounding gas as it grows, causing star formation, NASA further said.

The Cartwheel has been studied by other observatories in the past, including the Hubble Space Telescope. However, given the amount of dust blocking the view, the mysterious galaxy may actually be buried in mystery. The Webb telescope now reveals fresh information on the nature of the Cartwheel because of its capacity to detect infrared light.