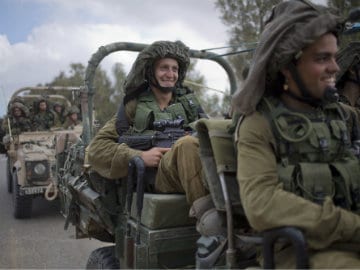 Israeli soldiers smile as they ride on a military vehicle near the Israel-Gaza Border, Thursday, July 17, 2014.

Jerusalem, Israel: Israel began a ground invasion into the Gaza Strip Thursday night, saying it would target tunnels that can infiltrate its territory after cease-fire talks failed to de-escalate the air war that has raged for 10 days.

The military released a statement at 10:39 p.m. saying the goal of the operation was to "establish a reality in which Israeli residents can live in safety and security without continuous indiscriminate terror."

Palestinians and journalists in Gaza reported heavy artillery fire from ground troops in the north and naval gunboats stationed near Gaza's port as well as a continuing air assault, with strikes targeting a rehabilitation hospital and, earlier, killing four young children as they played on a roof. Scores of rockets from Gaza continued to stream into cities all over central and southern Israel.

Hostilities quickly resumed at the end of a five-hour "humanitarian window" both sides had agreed to after nine days of fighting.

Gaza militants sent rockets into southern Israel starting precisely at 3 p.m., the end of the lull, and scores followed into the early evening, most landing in open areas. Israel held its fire for a couple of hours, but then hit hard, striking a house in eastern Gaza City around 6 p.m. and killing three children, according to witnesses and the Health Ministry of Gaza. Five other people in the house were wounded.

The Israeli military said five of the 57 rockets fired from Gaza hit open areas in southern Israel, including in the city of Ashkelon, and another fell short and landed inside Gaza, as sirens again sounded repeatedly. Two others were intercepted by Israel's missile defense system over Tel Aviv. Lt. Col. Peter Lerner, a military spokesman, confirmed the resumption of Israeli airstrikes at 5 p.m. but did not specify any targets.

The pause, requested by the United Nations, came after Israel foiled a predawn attack in which about 13 Palestinian militants emerged from a tunnel near a kibbutz, and as negotiations toward a Cairo-brokered cease-fire deal continued. It was interrupted by a brief flurry of mortar shells fired from Gaza that fell in open ground near the Gaza border, but otherwise the quiet held from 10 a.m. to 3 p.m., allowing Gaza residents to safely come out of their homes to shop and survey the damage the battle had wrought.

Palestinian, Egyptian, Israeli and U.S. officials said intense discussions were underway on terms for a cease-fire that could take effect as soon as 6 a.m. Friday, but none was willing to be quoted by name. A high-level Israeli delegation returned from Cairo, where President Mahmoud Abbas of the Palestinian Authority and Tony Blair, the envoy of the so-called Quartet of Middle East peacemakers, met Wednesday with President Abdel-Fattah el-Sissi of Egypt.

"The effort to achieve an end of the violence is ongoing," said one senior Israeli official. "We're not there yet."

The militant Islamic Hamas group, which controls Gaza, on Thursday denied reports that a long-term truce had been reached between Gaza Strip's militant groups and Israel during the talks. A Hamas spokesman in Gaza, Sami Abu Zuhri, said in a statement, "All what was published on reaching a cease-fire starting on Friday is untrue."

The attempted incursion into Israel via tunnel at 4:30 a.m. was the first during the current escalation.

An Israeli military spokesman said the militants were attacked from the air, and it was not immediately clear whether all had been killed. Residents of the Israeli border community nearest the exit of the tunnel, kibbutz Sufa, were told to stay in their homes for several hours after the initial confrontation.

With the Palestinian death toll exceeding 220, many of them civilians, Israel and Hamas, agreed to the suspension of hostilities on Thursday at the request of the U.N. One Israeli has been killed.

Ban Ki-moon, the U.N. secretary-general, said in a statement that he hoped that the discussions in Cairo, combined with the five-hour pause in fighting, would lead to a "more durable calm," and he expressed "support for international efforts, led by Egypt, to arrive at a sustainable cease-fire."

As the pause took effect, the thuds of F-16 airstrikes were gone, as was the smell of cordite that had punctuated days and nights in Gaza. The ripping sound of Hamas rockets, more than 1,000 of which have been fired at Israel since July 8, was also absent.

Many streets in Gaza remained quiet, yet people were unsure how safe things would remain, as they were mindful of how a previous proposed cease-fire on Tuesday had broken down after just a few hours. On the beach near Gaza City's small fishing harbor, where four boys were killed by an Israeli airstrike as they played on Wednesday, the children who often play there had not returned.

Still, in the hours before the lull there were more Israeli airstrikes and rocket fire. The military said that between midnight and the start of the lull in fighting it carried out airstrikes against approximately 37 targets, including 15 concealed rocket launchers. Smuggling tunnels running beneath the Egypt-Gaza border were also hit, according to local reports.

The Health Ministry in Gaza reported three Palestinian fatalities early Thursday. The dead included a man killed in an airstrike on a house in Beit Lahiya in northern Gaza; another man, 67, who was killed in a strike while on his way to the mosque for the dawn prayer in Rafah in the south; and a woman, 71, who died of injuries she sustained in an earlier strike in Khan Younis.

And before the lull in the fighting, more than a dozen rockets were launched from Gaza into Israel, including a barrage aimed at the Tel Aviv area about 9 a.m. At least one rocket was intercepted by Israel's Iron Dome missile defense system and others apparently fell in open areas. There were no immediate reports of injuries on the Israeli side.

Lerner of the Israeli military described the attempted tunnel infiltration as "a terrorist attack that could have had devastating consequences" had it not been thwarted.

The militants, who he said were armed with extensive weaponry, including rocket-propelled grenades, emerged from the tunnel about 270 yards inside Israeli territory and just over a mile away from kibbutz Sufa - "a short run," Lerner said, adding that the kibbutz, a rural community of about 300 residents, was the presumed target of the attack because of its proximity.

The existence of such tunnels is well known to the Israelis but they are difficult to discover and destroy from the air, adding to the argument of those Israelis who advocate a ground invasion of Gaza.

Eyal Brandeis, a member of kibbutz Sufa, said the residents received text messages at about 4:30 a.m. telling them to stay in their houses.

"From the sound of the explosions we understood this was a grave incident," he said by telephone. Soon the residents were told that there was a suspected infiltration attempt. Shortly before 10 a.m. they were told they could go back to their normal routines.

The U.N. said Thursday it had discovered 20 rockets hidden in a vacant school in Gaza during a regular inspection Wednesday. The U.N. Relief and Works Agency, which assists Palestinian refugees, called the use of a school to hide weaponry a "flagrant violation" of international law protecting civilians.

"This incident, which is the first of its kind in Gaza, endangered civilians including staff and put at risk UNRWA's vital mission to assist and protect Palestine refugees in Gaza," the agency said in a statement.

Agency officials notified Palestinian and Israeli authorities of the discovery and took steps to remove the rockets. The agency said it was beginning a full investigation of the incident.

Promoted
Listen to the latest songs, only on JioSaavn.com
Also on Thursday, the Israeli authorities formally indicted three Israelis suspected of having killed a 16-year-old Palestinian boy in Jerusalem. Officials said they believed the killing was carried out to avenge the abduction and murder of three young Israelis last month.