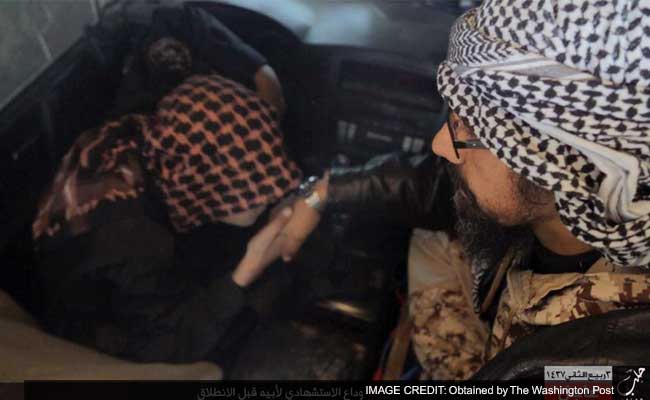 An image from an Islamic State propaganda video shows a child saying good-bye to his father before proceeding on a suicide mission. (Photo obtained by The Washington Post)

The boy appears to be no older than 12. He hugs his father, climbs into an armored vehicle packed with explosives and then kisses his father's hand before departing on a mission that ends in a fireball on the horizon.

That attack in Aleppo last month was one of at least 89 cases over the past year in which the Islamic State employed children or teenagers in suicide missions, according to new research that indicates the terrorist group is sending youths to their deaths in greater and greater numbers.

The father-son sequence was memorialized in propaganda photos released last month by the Islamic State, adding to an expanding collection of online eulogies that provides insight into how the organization uses children in combat operations and mass-casualty attacks on civilians in Iraq and Syria.

"The Islamic State is mobilizing children and youth at an increasing and unprecedented rate," according to a report to be published Friday by the Combating Terrorism Center at the U.S. Military Academy at West Point. A copy was provided to The Washington Post.

The study describes the Islamic State's use of children in suicide attacks as part of a broader strategy to cultivate a generation of school-age militants indoctrinated in the group's ideology and completely inured to its extreme brand of violence.

Since its emergence as a dominant force in Syria, the Islamic State has frequently cast children in roles designed to shock outsiders. A video released last month showed a child in an Islamic State headband pressing the button on a remote control, detonating a bomb strapped to a car containing three accused spies.

But the new study is the first comprehensive catalogue of cases in which the Islamic State used children in missions where they were expected to die. Roughly 60 percent of the victims were categorized as "adolescent," meaning ages 12 to 16. None were older than 18, and some were as young as 8 or 9, according to researchers at Georgia State University who were involved in the project.

At least 11 children or adolescents were killed in Islamic State operations in January, compared with six in the same month a year ago, according to the report, "Depictions of Children and Youth in the Islamic State's 'Martyrdom' Propaganda."

The use of children in combat has often been a sign of desperation, as was the case in Nazi Germany in the closing months of World War II. But researchers said that the Islamic State is not being forced to rely on underage fighters because of dwindling adult ranks.

Instead, they said that the group seems to employ children for reasons including their propaganda impact and ability to evade detection, as well as a system of values that regards even young lives as subordinate to the cause of re-establishing a "caliphate."

"It is striking that children are being integrated into the ISIS war machine not as substitutes but as soldiers and suicide attackers fighting alongside adult [militants]," said Charlie Winter, a senior research associate at Georgia State and co-author of the report.

Winter said that the practice could intensify if the Islamic State loses territory and fighters.

"We know that there are a lot more [children] being recruited than eulogized," Winter said. "As the military situation becomes more difficult for ISIS in the months and years to come, we'll see more instances of youths being used on the battlefield."

The vast majority of the children and teenagers used in suicide missions were from Iraq or Syria, where the Islamic State controls an area the size of West Virginia, according to the report. But others came from the Middle East and North Africa, and at least four were from Western nations, with two from Britain and one each from France and Australia.

The list of underage fighters killed between January 2015 and 2016 was assembled by examining Islamic State propaganda releases that generally did not disclose victims' real names or ages. Instead, researchers categorized the youths as adolescent or pre-adolescent based on physical characteristics or other clues.

Of the 89 cases cited in the report, 36 were killed after carrying out operations in which they drove vehicles packed with explosives. Eighteen took part in teams who carried out Kamikaze-style assaults on enemy positions, firing weapons and then detonating suicide belts. Only two cases involved suicide attacks on civilian targets.

Other terrorist groups, including Boko Haram, have tended to conceal their use of children in suicide attacks because of public scorn for the tactic, said Mia Bloom, a professor at Georgia State and a co-author of the report.

The Islamic State, by contrast, "is absolutely advertising it and making it routine," Bloom said, citing not only the group's use of children in attacks but also widespread evidence that children routinely attend public beheadings and screenings of propaganda videos showing other children being employed in suicide missions.

"It's about changing what is considered right and wrong, and making children almost immune to the horrific nature of what they're seeing" Bloom said. "It hardens these children and makes them more ready and psychologically available for things they'll do in the future."

The researchers did not include the images and videos they examined in their published report, citing privacy issues and a desire to be sensitive to families of the victims. But the study, which was funded through a grant program backed by the Pentagon, refers to images that have been widely circulated online.

Among them are the slide-show-like sequence of the father and his son in Aleppo, as well as an image of a child "wearing his baseball cap back-to-front, sitting atop what appears to be a fairground ride" before he was eulogized as a "martyr" by the Islamic State's media wing in Raqqa, Syria, the group's de facto capital.

The toll has grown since the report was completed. Winter said that five new eulogies for youths were released by the Islamic State on Thursday.