India, US Must be Committed to a True Strategic Partnership: John McCain 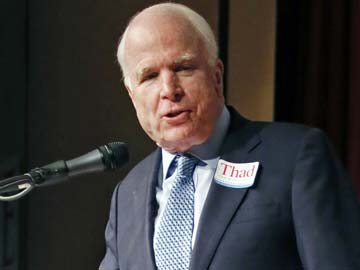 John McCain speaks at the Mississippi War Memorial on June 23, 2014

Washington: If India and the United States are to build a truly strategic partnership, the two countries must each commit to it and defend it in equal measure, Republican Senator John McCain has said.

"If India and the United States are to build a truly strategic partnership, we must each commit to it and defend it in equal measure. We must each build the public support needed to sustain our strategic priorities," McCain said in a major speech on India on the Senate floor yesterday.

He proposed three strategic interests that India and the US clearly share, and these should be the priorities of a reinvigorated partnership.

"First, to shape the development of South Asia as a region of sovereign, democratic states that contribute to one another's security and prosperity. Second, to create a preponderance of power in the Asia-Pacific region that favours free societies, free markets, free trade, and free commons," he said.

And finally, to strengthen a Liberal international order and an open global economy that safeguard human dignity and foster peaceful development, McCain said.

Cautioning against parochialism in the Indo-US relationship, McCain warned, "We must resist the domestic forces in each of our countries that would turn our strategic relationship into a transactional one - one defined not by the shared strategic goals we achieve together, but by what parochial concessions we extract from one another. If we fail in these challenges, we will fall far short of our potential, as we have before."

Excited to be returning to New Delhi to meet Modi and his national security team next week, McCain hoped that Modi's election could mean for the revitalization of India's economy and its rising power, and for the renewal of the US-India strategic partnership.

The decisive mandate to the BJP, he said, gives the Prime Minister a historic mandate for change, which Indians clearly crave.

"I want Prime Minister Modi to succeed, because I want India to succeed," he said.

"It is no secret that the past few years have been challenging ones for India - political gridlock, a flagging economy, financial difficulties, and more. It is not my place, or that of any other American, to tell India how to realise its full potential. That is for Indians to decide. Our concern is simply that India does realise its full potential - for the United States has a stake in India's success. Indeed, a strong, confident, and future-oriented India is indispensable for a vibrant US-India strategic partnership," McCain said.

According to the Republican Senator, it is also no secret that India and the United States have not been reaching their full potential as strategic partners over the past few years, and there is blame to be shared on both sides for that.

"Too often recently, we have slipped back into a transactional relationship - one defined more by competitive concession-seeking than by achieving shared strategic goals. We need to lift our sights again," he noted.

When it comes to US national interests, the logic of a strategic partnership with India is powerful: India will soon become the world's most populous nation, he said.

"It has a young, increasingly skilled workforce that can lead India to become one of the world's largest economies. It is a nuclear power and possesses the world's second-largest military, which is becoming ever more capable and technologically sophisticated. It shares strategic interests with us on issues as diverse and vital as defeating terrorism and extremism, strengthening a rules-based international order in Asia, securing global energy supplies, and sustaining global economic growth," he added.

Contrary to the old dictates of realpolitik, McCain said the United States seeks not to limit India's rise, but to bolster and catalyze it - economically, geopolitically, and yes, militarily.

"It is my hope that Prime Minister Modi and his government will recognize how a deeper strategic partnership with the United States serves India's national interests, especially in light of current economic and geopolitical challenges," he said.

Pushing for modernization of Indian armed forces, McCain said this is an area where US defense capabilities, technologies, and cooperation - especially between defense industries-can benefit India enormously.

Promoted
Listen to the latest songs, only on JioSaavn.com
"Similarly, greater bilateral trade and investment can be a key driver of economic growth in India, which seems to be what Indian citizens want most from their new government," he said.

Likewise, as India seeks to further its 'Look East' policy and deepen its relationships with major like-minded powers in Asia - especially Japan, but also Australia, the Philippines,
the Republic of Korea, Singapore, and Vietnam - those countries are often US allies and partners as well, and their collective ability to work in concert can only magnify India's influence and advance its interests, he added.