Russia-Ukraine War: 21-year-old Russian sergeant Vadim Shishimarin said, "I know that you will not be able to forgive me, but nevertheless I ask you for forgiveness." 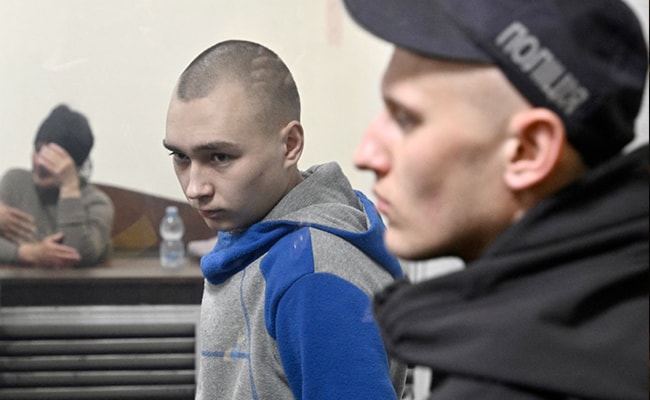 The accused is charged with war crimes and premeditated murder in the Ukraine War.

The first Russian soldier on trial for war crimes in Ukraine asked for "forgiveness" in a Kyiv court Thursday and described how he shot dead a civilian in the opening days of Russia's invasion.

"I know that you will not be able to forgive me, but nevertheless I ask you for forgiveness," 21-year-old Russian sergeant Vadim Shishimarin said in court, addressing the widow of a 62-year-old civilian whom he admitted killing.

Two other Russian soldiers are in court for crimes against civilians, as Kyiv launched a judicial reckoning for alleged atrocities after nearly three months of war.

Shishimarin told the court that he shot the civilian as he and several other Russian soldiers were retreating to rejoin their units in Russia.

The soldiers found a civilian car, a Volkswagen, which they hijacked to "get to where our army was and go back to Russia", Shishimarin said. "On our way as we were driving, we saw a man. He was talking on the phone. He said he would give us up."

Shishimarin said another soldier in the car, who he said was not his commander and whom he called an "unknown" soldier, "told me to shoot".

"He started to say in a forceful tone that I should shoot," he told the court. "He said I would be putting us in danger if I didn't. I shot him at short range. It killed him."

Judges questioned him in Ukrainian, with an interpreter translating for Shishimarin -- who is from the Siberian region of Irkutsk -- into Russian.

The killing took place near the village of Chupakhivka on February 28, four days into Moscow's invasion.

The soldiers then took a civilian captive as they retreated into the forest, Shishimarin said, claiming they did not harm him.

The Russians then "voluntarily" gave themselves up to Ukrainian forces.

'What did you come here for?'

The youthful-looking soldier, dressed in a grey and blue hoodie, looked towards the ground with his head leaning on the glass defence box where he was held as Kateryna Shelipova testified on her husband's death.

"What did you come here for, to free us from what?" Shelipova asked the Russian soldier, referring to Moscow's claims that its troops are liberating Ukrainian territories.

"What did my husband do to you?" she said, adding that she was getting water from a well when she "heard the shot".

She then saw a car and "a young man in it with a rifle. I remember him well", she said, referring to Shishimarin. "Five minutes later I saw my husband. He was dead with a shot in his head. I started screaming very loudly."

She said the incident took place around 11.00 am.

"My husband was in civilian clothing. In a coat and trousers," she said.

Another captive Russian soldier who was in the car, 20-year-old Ivan Matysov, told the court that the third unknown serviceman in the car "shouted in a commanding tone" to Shishimarin to shoot the civilian.

Both soldiers -- Matysov and Shishimarin -- said the third man was not a more senior officer, suggesting Shishimarin was not obliged to follow the order to shoot.

The Kremlin on Wednesday said it was not informed of Shishimarin's case. His lawyer said he had not had any contact with Russian officials.

Kyiv says it has opened thousands of war crimes cases since Moscow launched its invasion.