A concrete monument in the parking lot of a Culiacan supermarket marks the spot where a fifth son was gunned down in 2008. 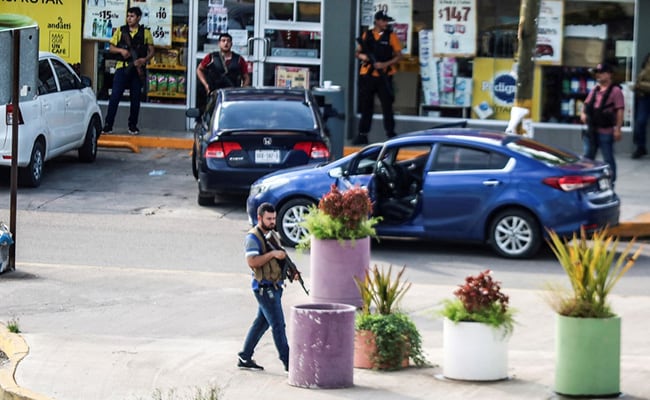 Cartel gunmen are seen near a burning truck during clashes with federal forces.

The mug shot-style photo of Ovidio Guzman that appeared as he was apprehended oozed defiance. Chin jutting out, eyes trained on the camera, the handsome youth bore a strong resemblance to his infamous father, jailed drug lord Joaquin "El Chapo" Guzman.

He had reason to be cocksure. In response to his capture in an upscale neighborhood, hundreds of heavily-armed Sinaloa Cartel henchmen, guns blazing, were pouring into Culiacan, briefly taking the modern city of about a million people near Mexico's Pacific coast hostage.

Within hours they had pried him loose from authorities.

It was like nothing Mexico had seen before, a military-style operation that outfoxed and outnumbered security forces, leaving the city shocked and smoldering. The show of strength dashed hopes the cartel was seriously weakened by the life sentence the elder Guzman received in the United States this year.

Not only were the new generation of Guzmans, collectively known as Los Chapitos, keeping alive their family's near-mythical outlaw reputation, but they were also doing it with a brazenness akin to open warfare.

Four surviving sons of El Chapo were already regulars in Culiacan's nightclubs and restaurants, despite U.S. indictments against them, before last Thursday's dramatic act of armed insurrection.

A concrete monument in the parking lot of a Culiacan supermarket marks the spot where a fifth son was gunned down in 2008.

None of the four are older than their mid-thirties. They have already survived kidnappings, arrest attempts and cartel infighting to establish themselves as the city's most prominent traffickers, with the support of cartel elders.

Thursday's attacks showed they were capable of taking on the Mexican army, state police and National Guard. Using a mixture of firepower, speed, discipline and the underlying threat of mass civilian deaths, they won.

Castaneda pointed to how over several hours gunmen stormed into businesses and sprayed police with bullets in crowded areas, on a scale unprecedented in the country's long-running drug war. Remarkably, the government says just 13 people were killed, including a soldier and several cartel gunmen.

Finally, a humbled Mexican government was forced to order Ovidio's release, opting against a bloodier confrontation that officials later said could have claimed hundreds of lives.

For many, Ovidio's newfound celebrity elevated him, along with his brothers, to the status of Sinaloa Cartel heavyweights, with Ovidio's exploits placing just him a few notches below his father in the pantheon of bandits who outsmarted the government.

A so-called narcocorrido - a style of song about the drug trade set to upbeat tuba and accordion rhythms - was released by Sunday, lionizing Ovidio as a "beast" and proclaiming that "the government was mistaken/they don't know who they messed with."

Despite the high profile antics, it is unclear exactly how much influence the Guzmans have over the cartel their father helped found decades ago, however.

Los Chapitos control drug sales in Culiacan, the capital of Sinaloa, including a growing trade in methamphetamine, according to one official who spoke on condition of anonymity.

Earlier this year, a fentanyl laboratory was found in the city, suggesting that the Guzmans also have their eye on the lucrative U.S. opiate business.

But the cartel's bigger interests are still believed to be handled by El Chapo's former partner, Ismael "El Mayo" Zambada, a discrete capo in his early 70s who has never been arrested.

The businesses Zambada handles move billions of dollars, U.S. authorities say, and are diversified across many sectors in dozens of countries, including even niche markets like wildlife and timber smuggling.

Edgardo Buscaglia, an organized crime expert at Columbia University, agrees that Zambada probably still controls the cartel. He described the new generation as more reckless, but certainly not as powerful.

In recent years, the relationship between the family and Zambada has been fraught, with his son testifying against El Chapo at his U.S. trial. In turn, the defense argued Zambada was the real head of the cartel, not El Chapo.

However, Zambada, who is said to be Ovidio's godfather, apparently supported the assault to release him. A statement issued on Tuesday under the cartel's C.D.S insignia was intended as a show of unity between the factions, Buscaglia said.

In one crackly recording circulating online, purportedly of internal Sinaloa Cartel radio communications on Thursday, a supposed gunman celebrates that Zambada was supporting the battle to release Ovidio.

Thursday's antics showed Ovidio commanded sufficient loyalty in the organization for fighters to risk their lives to save him, Buscaglia said. And despite the cartel's head-on fight with the state to release him, he predicted Los Chapitos were smart enough avoid sustained confrontation with security forces.

"They know they would lose in the long term," he said.

Up until last week, Ivan Archivaldo, estimated to be 35, and Jesus Alfredo were El Chapo's better-known sons. Locals say both could be spotted in the city's trendy nightclubs and restaurants clustered around Culiacan's upscale Tres Rios neighborhood, where Ovidio was briefly detained by a force of about 35 soldiers.

Far from hiding in safehouses, they and their friends are known to enjoy tearing through Culiacan's nearby hills in souped-up all terrain vehicles, two people said. Two dealerships that sell high-end models are located in the city.

"Yeah, a lot of people here know who they are and see them out and about," said a young clerk at a clothing shop, asking that her name not be used for fear of reprisals.

In 2017, Ivan Archivaldo and Jesus Alfredo were believed to be behind an attack on then-rival Damaso Lopez, a high-level Sinaloa Cartel leader once rumored to be El Chapo's successor, in the dusty town of Villa Juarez just outside Culiacan.

"It was crazy. The shootout lasted more than two hours. Ta-ta-ta-ta-ta-ta-ta-ta," said a local witness, mimicking the sound of gunfire and pointing to where bullet holes remain visible. Two people died, including a pregnant woman.

More than a decade ago, Ivan Archivaldo was arrested and jailed, but he was released in 2008 due to what a judge called a lack of evidence. That same year, El Chapo's eldest son, Edgar Guzman, was gunned down in a supermarket parking lot in Culiacan, the spot now marked by a stone cross.

Following the footsteps of El Chapo, who staged two spectacular prison breaks and eluded capture multiple times, Ivan Archivaldo dodged an imminent arrest in 2014 by dressing as a waiter and fleeing through the kitchen of a high-end seafood restaurant in Culiacan, government sources told Mexico's Milenio newspaper.

"It will always be like this," Ivan Archivaldo said in an interview published last year in Belgian magazine Knack, when asked if there was a war between the cartel and the state.

"It is the government's job to fight us, by mandate, they have to fight drug cartels," he said, adding: "There's a lot of people who protect me and my family."

(This story has not been edited by NDTV staff and is auto-generated from a syndicated feed.)
Comments
El ChapoEl Chapo son