In America's Democratic Showcase, The World Sees A Model Of What Not To Do 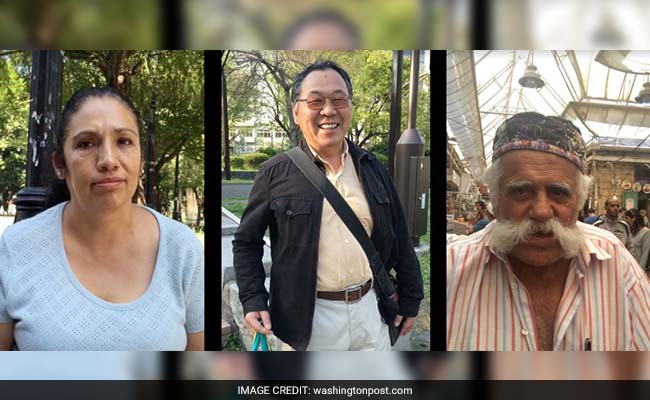 What do everyday people around the world think of the US presidential election.

London: In the seaside cafes of Beirut, the whole thing looks "like a bad joke." To persecuted journalists in Burundi, it amounts to "a total loss of dignity." The government-scripted press of Beijing diagnoses "an empire moving downhill." And the spin doctors of the Kremlin see cause for pure and unambiguous delight.

The U.S. presidential election - America's quadrennial chance to showcase for the world how democracy works in the most powerful nation on Earth - has become instead an object lesson in everything that ails a country long seen as a beacon of freedom and hope.

Debates devoid of issues and deep in the gutter of personal insult. Interference from foreign intelligence services. Endless leaked emails, and FBI investigations that could extend long beyond Tuesday.

Americans may cringe watching their own election at close range. But the world's reaction has been, in a sense, even more poignant and foreboding.

People in small and distant countries who count on the United States to stand up for democratic values have been astonished to see the essential components - a free press, the rule of law, respect for the outcome of elections - trammeled.

Long-standing allies have been left to wonder whether the essential American character has changed, and whether the United States can be relied on when it counts.

Adversaries have looked on with glee, surprised at how easily the country that casts itself as the greatest can be knocked off kilter.

And even though the campaign still has days to go - with the outcome very much in doubt - the damage to American moral standing may already be done.

"I heard the election is being controlled by Russia. Is it true?" asked Anas al-Abed, 27, a Beirut cafe worker who said he has been following the campaign closely ever since he read that the Republican nominee, Donald Trump, had bragged about assaulting women.

"America always spoke to Arab countries as if they had so much to learn," he said. "And now we see their own democracy involves choosing between a woman from a dynasty and a man who says the system is manipulated. If that's democracy, then we don't want it."

This is not the first time that America's international reputation has been dealt a grievous blow. In recent years, the Iraq War brought global perceptions of the United States tumbling, only to be revived by the election of President Barack Obama - who remains broadly popular overseas.

But political analysts worldwide said that never before have they seen a presidential campaign do so much to directly undermine America's core credibility.

"It's very shocking and disturbing to see this happening on such a scale in the richest country on Earth," said Koichi Nakano, a political-science professor at Sophia University in Tokyo.

It is not, of course, happening in a vacuum. Democracies from Southeast Asia to Western Europe are under pressure from within as populism and xenophobia surge. Autocrats from Moscow to the Middle East, meanwhile, are feeling emboldened.
"It isn't just about this election," said Jacob Parakilas, deputy head of the U.S. and Americas program at the London-based think tank Chatham House. "It fits into a broader framework of rising nationalism and the destruction of existing political norms."

But with the breakdown of those norms happening so vividly in America - a nation that proselytizes the virtues of democracy more aggressively than any other - the global swing toward less free and open societies could accelerate no matter who wins Tuesday.

"This campaign makes the implicit argument that the U.S. model of liberal democracy isn't what it's cracked up to be," Parakilas said.

America's top diplomat has acknowledged as much. Speaking to students in London on Monday, Secretary of State John Kerry called the campaign "downright embarrassing" and said that it has already damaged American influence.

Thanks to the election, he said, he is greeted with skeptical looks - or worse - when he sits down "with some foreign minister in another country or with the president or prime minister of another country and you say, 'Hey, we really want you to move more authoritatively towards democracy.' "

In the state-controlled media of America's nondemocratic rivals and adversaries, the campaign has only exposed what they long knew the country to be - a declining and morally bankrupt power.

"We are seeing the failure of U.S. democracy," wrote Zhang Zhixin, an expert on American politics at the China Institute of Contemporary International Relations.

The message is not only that America is floundering but also that China, prosperous and stable, is growing strong in its place.

With Philippine President Rodrigo Duterte promising to "separate" from the United States and realign with China's "ideological flow," Communist Party-approved writers seem to see an opening for more shifts in China's favor.

A recent piece in Xinhua, the state-controlled news wire, cited work by Li Wen, an academic at the Chinese Academy for Social Sciences, who argued that instability in the United States shows the "twisted mentality of an empire moving downhill."

In Russia, the campaign has not exactly reshaped perceptions of the United States. But it has reshaped Russians' perception of what their country is capable of doing to the United States.
Russian observers barely hide their joy at the notion that Americans think that Moscow has the power to affect the outcome of a U.S. presidential election.

"When we hear that we are sitting here in Moscow and interfering in America's life, that makes us all happy," said Gleb Pavlovsky, a political consultant who served at the Kremlin between 1996 and 2011. "We don't need to do anything; we can just sit here and organize elections in the United States."

Like most Russians, Pavlovsky is unwilling to acknowledge the U.S. administration's accusation that Kremlin-sponsored hackers have been meddling in the campaign.

But in a country where people feel the United States has overplayed its hand as the world's sole superpower, American officials' consternation over Russia's suspected role is seen as payback - and a possible political advantage.

"The feeling is that the chaos, the turbulence that all this is causing in the American electoral process is good for Russia," said Alexei Venediktov, editor in chief of Ekho Moskvy radio. "Whoever wins will have to deal with domestic upheaval and internal problems, rather than paying attention to Russia, and that is a good thing."

To U.S. allies, however, it is potentially disastrous. Trump has struck fear into the hearts of European leaders with suggestions that he may not come to the aid of fellow NATO members if they are attacked. Several have broken with protocol - which calls for strict neutrality - and denounced the Republican nominee, while praising his Democratic opponent, Hillary Clinton.

But Europe is confronting its own backlash against international cooperation.

Across the continent, anti-immigration politicians who want to pull their nations out of the European Union have exulted in Trump's success.

"Until about a year ago, when I would meet American counterparts, they'd ask, 'What is happening in Europe?' " said Marietje Schaake, a member of the European Parliament. She listed far-right leaders and parties that no longer seem so alien in America.

"We're seeing a shared challenge arising: challenges to the open economy and open democracies," she said.

Among some American allies, the U.S. campaign has even been a strange source of comfort because their own politics no longer look so bad.

Israel, known for its bare-knuckles brand of political jousting and for corruption cases that have snared presidents and prime ministers, has been unusually fixated on this year's race.

"Our politicians are perhaps not as crooked or corrupt as yours," said Jonathan Rynhold, a political scientist at Israel's Bar-Ilan University. "Ours are fairly mild by comparison."
In India, too, the effect of such an ugly contest has been surprisingly validating.

"For many middle-class Indians, the U.S. is a model for democracy. But watching the election campaign there now makes Indians feel slightly superior," said Shiv Visvanathan, a government professor at O.P. Jindal Global University.
It has also been deeply disquieting.

"How can such a trigger-happy nation be part of the great nuclear club, and take global decisions?" he asked.
Many in the Arab world are asking similar questions and are particularly unnerved by the rise of Trump, said H.A. Hellyer, a political analyst and author of a book on the 2011 Egyptian uprising.

"The fact he's a genuine contender has damaged American standing almost everywhere - not least within the Arab world and the wider region," Hellyer said. "His discourse, which has attacked Muslims . . . is not marginal. It is now mainstream, and that's deeply troubling."

The worry has also been especially acute in Mexico, where opinions toward Trump are overwhelmingly negative - no surprise given that his signature issue is building a border wall. He also launched his campaign by calling Mexican migrants "rapists."

Mexicans accustomed to feeling indifferent toward the U.S. presidential campaign have found themselves actively rooting for Trump to lose.

"For the first time there is a distinction: There's an American good guy and an American bad guy," said Ilán Semo, history professor at the Iberoamerican University in Mexico City. "It was never like this in Mexico."

The angst over Trump is so deeply felt that the peso plunges every time his poll numbers rise, and there could be an immediate recession in Mexico if he comes to power, said Jonathan Heath, an economist in Mexico City.

Latin America has been shifting back toward the political center in recent years after a long period dominated by left-wing populism. But the new crop of pro-business leaders has found that no one in the presidential race is willing to stick up for the principles of free trade and open markets that the United States has been pushing in the region for years.

Political whiplash is happening in Africa, too. For many on the continent, Obama's election had been a triumph, evidence that American democracy could be a model of liberalism and tolerance.

Now, eight years later, Trump's threats to jail his political opponents mimics the behavior of some of the continent's own less-than-democratic leaders.

Among them is President Pierre Nkurunziza of the small central African nation of Burundi. He was sworn in for a third term last August, and exiled activists have been lobbying the United States to help halt the extrajudicial killings and repression that have characterized his new term.

The campaign, however, has offered little cause for optimism in a country such as Burundi, far from America's geopolitical priorities but in dire need of help from a superpower.

Elvis Banyankiye, a 28-year-old Burundian who is now studying in France, said he had once hoped the Americans would do more to pressure his government to stop human rights violations. Watching America's presidential campaign stagger from one new low to the next, his expectations sank.

"The U.S. has been a model for how to conduct elections. We used to see tolerance in the debates," he said. "We are losing confidence in that."

Video: What do everyday people around the world think of the U.S. presidential election and the Democratic and Republican frontrunners? We wanted to know, so reporters from Washington Post foreign bureaus asked a random selection of people on the street what they thought of Hillary Clinton and Donald Trump. Jason Aldag, The Washington Post.


Promoted
Listen to the latest songs, only on JioSaavn.com
© 2016 The Washington Post