The narrow Kerch Strait, between Crimea and mainland Russia, leads from the Azov to the Black Sea, which in turn connects to Western Europe and to Asia via the Mediterranean and the Suez Canal. 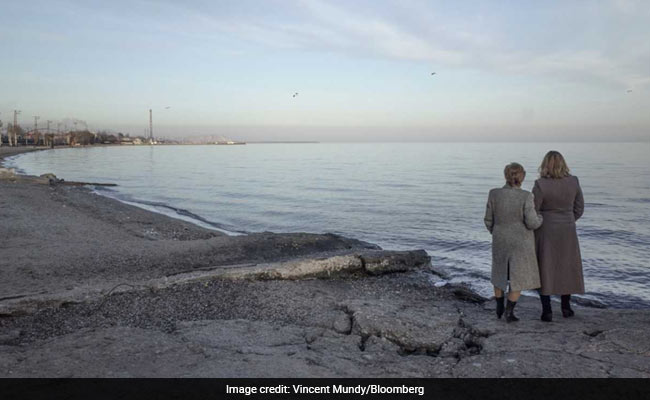 Nestled in Europe's southeast corner is the world's shallowest sea: the Azov. It is no more than 50 feet deep and smaller than Lake Michigan. But it's come to bear outsize geopolitical importance because of the territories that bound it: Ukraine to the west, Russia to the east, and Russia-annexed Crimea to the south. The narrow Kerch Strait, between Crimea and mainland Russia, leads from the Azov to the Black Sea, which in turn connects to Western Europe and to Asia via the Mediterranean and the Suez Canal.

Months of brewing tensions over the use of this sea underpin the latest flare-up in the conflict between Russia and Ukraine. Here's a quick primer to the world's latest marine flash point.

What is the Azov's significance?

The Azov is a lifeline for Ukraine's industrial and agricultural east, connecting the country's mines, fields and factories to the world. The Ukrainian port city of Mariupol and nearby Berdyansk on the sea's western shore export regional production such as coal, metals, grain, and fertilizer. Just 60 miles up the coast, the Russian port of Taganrog is a hub for trade through Russia's southwest. The Azov is also an important fishing ground frequented by Russian and Ukrainian boats.

Why have tensions risen?

Under a 2003 agreement, Ukraine and Russia took shared control of the Azov Sea and guaranteed each other's ships open access to it via the Kerch Strait. But when Russia annexed Crimea in 2014, it took over both sides of the Kerch Strait - and used that control to build a bridge connecting Crimea to mainland Russia. The bridge's relatively low height limits the kinds of ships that are able to enter the Azov Sea - putting Ukraine's ports there at a new disadvantage, as Radio Free Europe/Radio Liberty detailed in August. Citing terrorism threats against the Kerch Strait bridge, Russia has also stepped up security patrols and started detaining Ukrainian boats. Ukraine accuses Russia of militarizing the Azov Sea and harassing Ukrainian ships. Russia says it's defending its sovereign territory and guarding the Kerch Strait bridge against legitimate threats.

What happened on Sunday?

Tensions escalated rapidly on Sunday when Russia blocked Ukrainian Navy ships from entering the strait and opened fire, injuring several Ukrainians and detaining 24 sailors. The United States called Russia's actions a "dangerous escalation and a violation of international law." Russia says the Ukrainian boats had illegally entered Russia's territorial waters after ignoring the directions of the marine pilot who was supposed to guide the Ukrainian ships through the Kerch Strait.

After blocking all access to the Azov Sea in the immediate aftermath of Sunday's incident, Russia has reopened the Kerch Strait to civilian ship traffic, according to Russian news reports. The 24 Ukrainian sailors remain in detention, and Russia claims they include Ukrainian intelligence service members. In Ukraine, meanwhile, President Petro Poroshenko is under pressure to take a harder line against Russia - including ripping up the 2003 agreement that provides for shared use of the Azov Sea by the two countries. Signaling that marine tensions will stay high, Ukraine on Monday night declared 30 days of martial law for 10 regions of the country - including the Azov Sea coast and the waters of the sea itself.