How A Taiwan Temple Descendant Grew His Online Start-Up By 1,600 Per Cent

It's that personal touch and a rampant social media presence that helped 486-founder Chen Yen Chang grow sales at the e-commerce startup by 16 times in eight years. Imagine Jeff Bezos dishing out advice on home appliances, schooling and relationships in chatty YouTube videos. His staff get rent subsidies and marriage bonuses. Once a year, he takes everyone on a two-week trip -- most recently, to Scandinavia.

It's that personal touch and a rampant social media presence that helped 486-founder Chen Yen Chang grow sales at the e-commerce startup by 16 times in eight years. The self-styled lifestyle and home gadgets guru has amassed 750,000 Facebook followers -- not bad for an island of 23 million. His unboxing and review videos have drawn half a million views.

"I've been going out of my way to help others. Why do people on the internet buy things from you? They don't really know you but it's because they trust you," the bespectacled entrepreneur said at an office in downtown Taipei stacked high with robot vacuums. "The kinds of relationships I forge with my customers are on a different level."

Many of them are women. Chen's an unlikely touchstone for the female shoppers who drove 486's stratospheric growth. The descendant of a prominent Taoism figure has evolved well beyond unboxing: he gives his stuff nicknames like 'Little White' and devotes half his office to an employees' kitchen from which he shoots cooking videos. He's connecting with women -- traditionally heads of the household in Taiwan -- who want reliable reviews on home paraphernalia. Chen's step-by-step guides remain rare in a $7 billion e-commerce arena heavy on the tech toys like laptops and smartphones that Taiwan's firms crank out for the world. 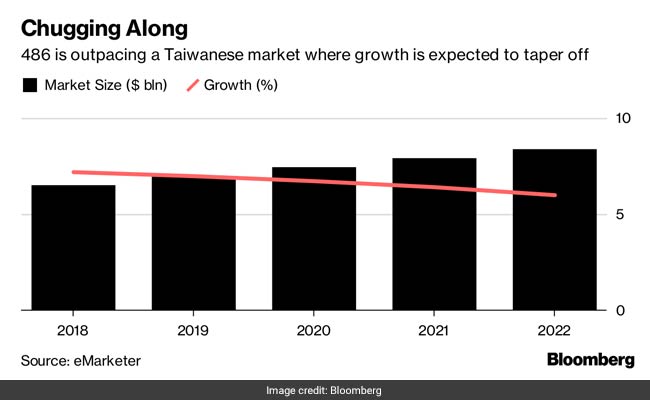 As a smaller outfit, 486 can't compete with local rivals Yahoo or PCHome when it comes to variety -- it's about a 10th the size of the latter. But the avuncular father of two, who goes by Mr. 486 and often refers to "We-Commerce," attracts a devout following by keeping up an eclectic conversation with fans. That means everything from views on capital punishment to how to pray for romance: an ancestor of his founded Taipei's Xia Hai City God Temple, the famed seat of the Taoist pantheon's matchmaking deity. Every year, he marshals his staff to help thousands send clothes there to be blessed, charging nothing.

But it's 486's videos that're the main draw. His staff pitches in, shooting demos complete with the cartoonish sound and visual effects common in Taiwanese and Korean variety programs. Not the sort of thing you'd see from Amazon.com Inc.

"What makes his platform different is he uses language ordinary people understand to give a very detailed introduction of his goods," said Janet Hsieh, a 42-year-old homemaker who's tracked Chen's pronouncements for years. "I feel he's sincere and trustworthy and even though he doesn't necessarily offer the lowest price, he gives money to charitable causes and customers usually feel it's OK he's making some money off them."

His voice has become so influential that global brands seek him out. LG Electronics Inc. tapped Chen for, among other things, the launch of a robot vacuum with a built-in mop. He helped it unveil a line of washing machines in 2016 with an earnest video detailing how households can save time and utility costs. Pre-orders surged.

"Chen is an influencer in Taiwan's home appliance market," Lin said. "He is very powerful."

That's an achievement for an eight-year-old outfit with sales of just NT$1.6 billion ($52 million) in 2017 and that employs 40 people including part-timers -- 26 of them women, 14 of them mothers. One of those is partially deaf, and Chen also pays a mentally disabled woman to clean the office. Phoebe Pan, who's served as Chen's executive assistant since 2016, decided to quit a stressful banking job after she got pregnant six years ago. Her part-time 486 gig now affords her time with her kindergarten-age daughter. "As a mother and wife, I still need 'me time,'" said Pan, who has an MBA from New York's Baruch College.

Along the way, Chen's built a reputation as a generous employer. He offers subsidies for rent, marriage and childbirth, and organizes yearly excursions to destinations from Japan to Spain, during which most of the business shuts down. All are welcome to join, including part-timers.

Their headquarters double as a showroom and storehouse for boxes of appliances. Staff are free to do their laundry in top-of-the-line washing machines in the basement. Free lunches are another perk, and employees often chat in plain view of Chen in a casual setting replete with travel souvenirs. Chen's philosophy is simple -- family first. His staff respond in kind, calling him "big brother" -- a term of endearment.

"We work hard because we do it for our families and children. If you do not take care of your children when they need you because you have to work, you are getting your priorities wrong," Chen said. "This is how our company differs from others."