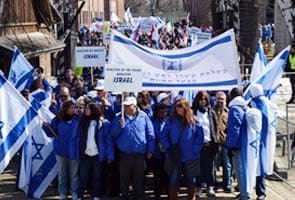 Osweicim, Poland: Thousands from across the globe marched solemnly on Monday at the former Nazi Auschwitz-Birkenau death camp to honour the six million Jews killed in the Holocaust during World War II.

The mournful wail of the "shofar" -- a traditional Jewish ram's horn symbolising freedom -- marked the beginning of the March of the Living, held this year for the 22nd time since 1988 in this southern Polish town where in 1940 Nazi Germany built Auschwitz, its most notorious death camp.

Eleven thousand people, including hundreds of an ever dwindling number of elderly Auschwitz survivors, young Jews from as far away as Australia or Brazil along with two thousand young Poles passed through the infamous "Arbeit macht frei" (Work Will Set You Free) gate at the Auschwitz camp, before starting the two-mile trek to the Birkenau camp.

"I am here because I believe that my grandparents' death was not in vain. We should live in peace and harmony," David Olidolt, a 16-year-old who travelled from Israel told AFP as he marched through the former camp grounds, this year still covered with a blanket of snow.

"It is really important to come here and see -- to be among the survivors," said Miriam White, who accompanied nearly 200 Jewish youngsters from Los Angeles, California.

"I am here for one more reason -- because my father was from Poland," the 45-year-old told AFP.

"Participating in the march is a tradition at our school," Weronika Rogas, a 17-year-old Polish student from the nearby town of Tychy, told AFP, adding the event was a lesson in tolerance and respect for cultural diversity.

Israeli army chief Benny Gantz and World Jewish Congress president Ronald Lauder, were also among the marchers who flock to the site each year around April 19, marking Holocaust Remembrance Day in Poland.

It is held in conjunction with the outbreak in 1943 of the doomed Warsaw Ghetto Uprising by Jewish partisans against the Nazis, the first rebellion of its kind during World War II.

More than one million people, mostly European Jews, perished at Auschwitz-Birkenau, operated by Nazi Germany in occupied Poland from 1940 until it was liberated by the Soviet Red Army on January 27, 1945.

The site was one of six German death camps set up in occupied Poland, a country which was home to pre-war Europe's largest Jewish community.

Many Auschwitz victims were sent to its gas chambers immediately after being shipped in by train. Others were worked to death as slave labourers.

Promoted
Listen to the latest songs, only on JioSaavn.com
Among the camp's other victims were tens of thousands of non-Jewish Poles, Soviet prisoners of war, gypsies, and anti-Nazi resistance fighters from across Europe.

Upwards of 200 people including Holocaust survivors also participated in a similar march honouring Holocaust victims on the outskirts of the Lithuanian capital Vilnius, where Nazis and local collaborators massacred 70,000 Jews during World War II.