"We did not understand what had happened. Everything fell apart, nothing was left in place," Mr Sawaya said 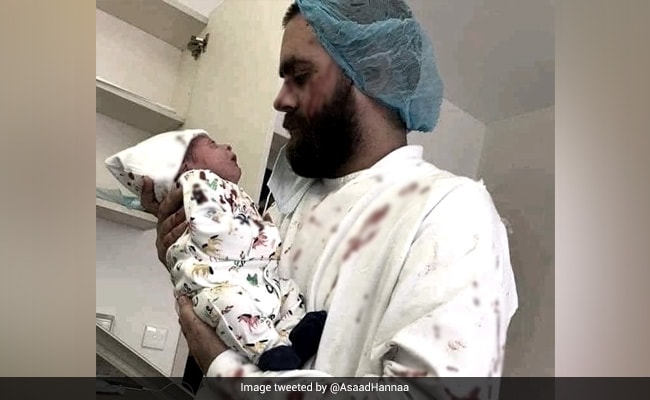 Jad Sawaya was photographed hugging his newborn baby in the aftermath of the blast.

Heartbreaking photographs that have been widely circulated online show a young father in bloodstained clothes, hugging his baby boy who was born minutes before the deadly explosion in Beirut. The huge blast that hit Beirut's port devastated large parts of the Lebanese capital, claimed over 150 lives and wounded some 6,000 people, according to news agency AFP.

Crystal Sawaya had just given birth to a healthy baby boy when the massive explosion shook the building of the Al Roum hospital in Beirut, reports CNN. While her husband, Jad, immediately took their newborn in his arms to protect him from the aftermath of the blast, Ms Sawaya was seen lying in a bed full of broken glass.

"It was a very difficult situation. We were in the room when the explosion occurred. We did not understand what had happened. Everything fell apart, nothing was left in place," Mr Sawaya said. "I quickly hugged my child to protect him and ran to find a corner to hide as I was afraid of a second explosion."

The photographs of the new parents are among the many heartbreaking pictures and videos that have flooded social media. Assad Hanna, CEO of Emissa LLC, was among those who shared it on Twitter.

"This lady just gave birth at the hour of the explosion in #Beirut," he wrote.

This lady just gave birth at the hour of the explosion in #Beirut... again the doctors prove ghat they're the real heroes and the first line responders ❤️❤️❤️ pic.twitter.com/bxJ6ezmW1R

Mr Sawaya explained to Al-Ain News that the newborn, named Nabil, was lying beside his mother when the explosion occurred and sent a glass pane flying in their direction.

"Nabil was in his bed beside his mother's bed. I was injured and bruised in my head and neck, and Crystal was also hit in the head and forehead, while Nabil, God's providence saved him and prevented him from being injured," he said. Mr Sawaya added that he carried Nabil while a stranger helped his wife.

Most Lebanese authorities say Tuesday's explosion was triggered by a fire in a port warehouse, where a huge shipment of ammonium nitrate, a chemical that can be used as a fertiliser or as an explosive, had languished for years.