Gottfried Wilhelm Leibniz occupies a prominent position for having developed differential and integral calculus independently of Isaac Newton. His notation has been widely used ever since it was published. 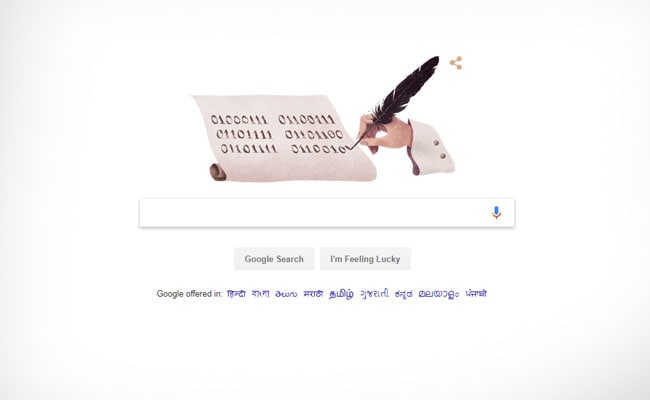 Google today celebrates the 372nd birthday of German philosopher and mathematician's Gottfried Wilhelm Leibniz with a doodle. He was born on July 1, 1646, Leipzig, then Roman Empire (now in Saxony, Germany). His contributions to a vast array of subjects have been scattered across various journals.

Gottfried Wilhelm Leibniz was easily one of the most brilliant minds of his time and occupies a prominent place in the history of mathematics. He is credited for his inventions in the field of mechanical calculators and was the first to describe a pinwheel calculator in 1685 and invented the Leibniz wheel, used in the arithmometer.

He occupies a prominent position for having developed differential and integral calculus independently of Isaac Newton. His notation has been widely used ever since it was published.  The foundation of all modern-day computers has also been refined by him because of binary number system.

Mr Leibniz is also credited for stating the first modern formula for pi.

In philosophy, Mr Leibniz is most noted for his conclusion that our Universe is, in a restricted sense, the best possible one that God could have created, an idea that was often lampooned by others such as Voltaire.

He wrote and major contributions in the fields of philosophy, politics, law, ethics, theology, history, and philology.

Despite all this, he spent his final years away from the intellectual circles of the world after Scottish mathematician John Keill accused him of plagiarising Isaac Newton's work on calculus.