France Elections 2022: Surveys ahead of the vote's first round forecast that if she made it to the second round, she would offer a stiff challenge to her centrist opponent, with some pollsters putting their scores within the margin of error of one another. 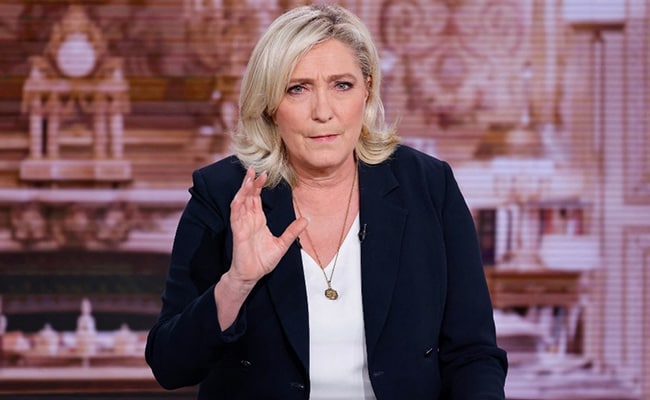 France Elections: The 53-year-old also enjoyed cover from the emergence of Eric Zemmour, a TV polemicist

Marine Le Pen has fought for years to make the far-right party she inherited electable, and is now set up for a tight runoff showdown against incumbent Emmanuel Macron for the French presidency.

Surveys ahead of the vote's first round forecast that if she made it to the second round, she would offer a stiff challenge to her centrist opponent, with some pollsters putting their scores within the margin of error of one another.

Unlike in 2017, Macron is not assured of the support of the traditional united front of mainstream French voters that has seen off Le Pen and her father in previous elections.

Her strong performance is in large part thanks to her ability to soften her image in the 11 years she has led the former National Front, which she renamed the National Rally (RN) after expelling her father Jean-Marie in 2015.

Following a humiliating drubbing from Macron in a television debate before the 2017 election on Europe and economic policies, this time Le Pen has focused on cost of living issues in the face of rising inflation.

But the detail of her programme is little changed, including measures like removing benefits from many immigrants, repudiating the primacy of EU law and closing the door on most asylum-seekers.

The 53-year-old also enjoyed cover from the emergence of Eric Zemmour, a bombastic TV polemicist who is still further to the right, and even more anti-Islam and anti-immigration.

Le Pen on Sunday dubbed her new face-off with Macron "a choice about our society and our civilisation", vowing both to "restore France's sovereignty" and "re-knit the many breaks in a France that is too divided" if elected.

But political scientist and expert on the extreme right Jean-Yves Camus cautioned ahead of the ballot that the final points to take a candidate to 50 percent of the vote "are the hardest to win".

Le Pen's life has been marked by the legacy of her openly racist father, a veteran of the long war in Algeria that ultimately led to the former French colony's independence.

French people forced to flee Algeria and their descendants -- the so-called "pieds noirs" -- remain a crucial base of support for the party in the south.

When she was young "it wasn't easy for people to go out with Marine Le Pen" based on her family name, she told celebrity magazine Closer in an interview that aimed to present a more humane image.

"I remember one man chose to break up with me, the pressure from his social circle was so heavy."

Twice divorced, she said she is now happy being single.

After training as a lawyer, she began her career defending illegal immigrants facing deportation, but later returned to the family fold and to her father's party.

Under her leadership since 2011, the party has expanded its appeal to people in France's formerly Communist-voting northern rust belt. Her expulsion of the elder Le Pen, who once called the gas chambers of the Holocaust a "detail of history", has also helped temper its toxic image.

The tough years following the 2017 defeat saw Le Pen purge still more senior RN members judged harmful to the party's image, while her niece Marion Marechal -- a former MP and popular figure on the French far-right -- has switched her support to Zemmour.

The Le Pen name remains touchy enough that most RN campaign posters refered to the candidate simply as "Marine".

Experts have warned that the laws Marine Le Pen says she will pass would overturn historic French principles.

Le Pen's plans include a so-called "national preference" for hiring French workers over foreigners, exclusion of non-citizens from some social benefits and opting out of parts of the European Convention on Human Rights.

That would mean "abandoning our (treaty) commitments and setting off a Frexit" -- a French departure from the European Union -- said Serge Slama, a law professor at the University of Grenoble.

Meanwhile a backlash over Le Pen's professed admiration for Russian leader Vladimir Putin, who she met in 2017, has so far failed to materialise despite the war in Ukraine.

In the second election round, "we have to make sure the French public ask themselves a simple question: who do they want as head of the army and chief diplomat? Do they want someone who's aligned with Vladimir Putin?" Christophe Castaner, head of Macron's party in parliament, told news channel BFMTV.

In recent days, Le Pen has tried to shore up her Russian flank by calling for the recall of France's ambassador to Moscow.

However, "for protest voters, international affairs, even if they're among everyone's worries, won't be the first point of reference for their ballot," said Anne Muxel, research director at Paris' Centre for Political Research.