It looked like a scene straight out of Vin Diesel's 'Fast & Furious' movie franchise or a leaked footage from Rockstar's highly-anticipated Grand Theft Auto 6 (GTA 6) videogame. Except, it was not. 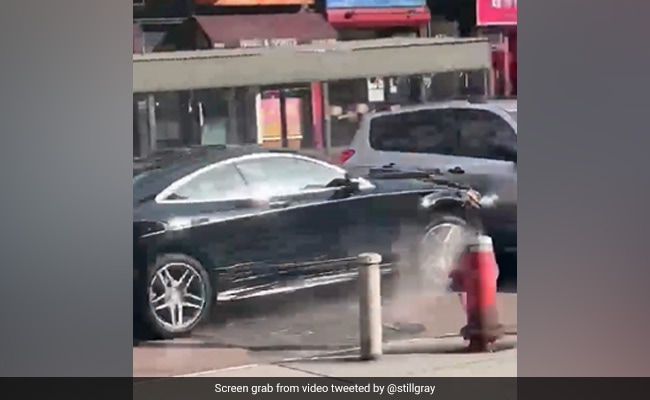 A wild car chase ended in an armed robbery on the streets of New York city on Saturday afternoon. It looked like a scene straight out of Vin Diesel's 'Fast & Furious' movie franchise or a leaked footage from Rockstar's highly-anticipated Grand Theft Auto 6 (GTA 6) videogame. Except, it was not.

The robber rammed his black Mercedes into a Toyota Rav4 and then made off with a bag of cash from its driver on the Upper East Side. He made off with $20,000 in cash, New York Post reported quoting law enforcement sources.

Dramatic videos, shot by onlookers, show the black Mercedes intentionally hitting the silver SUV and spinning it into another lane of traffic as the sound of screeching tires filled the scene. It smashes the Toyota again, forcing it onto the sidewalk. The next frame shows a man, with a gun, exiting the sedan.

The man, in a gray sweatshirt and black pants, banged on the passenger window of the SUV. He was then seen hopping into the Mercedes with a black bag.

The chaos shocked pedestrians with one seen jumping for cover. "He's got a gun! He's got a gun!" an onlooker can be heard yelling in one of the videos.

"The suspect fled the location in the vehicle," a police spokesperson told The Independent. "There are no arrests and the investigation is ongoing."