Fargo Woman Lured Pregnant Neighbor To Her Apartment, Killed Her And Took Her Unborn Baby

But LaFontaine-Greywind disappeared somewhere inside the apartment building on Aug. 21, leaving her car parked in the lot, her wallet behind, and a freshly delivered pizza cooling at home. 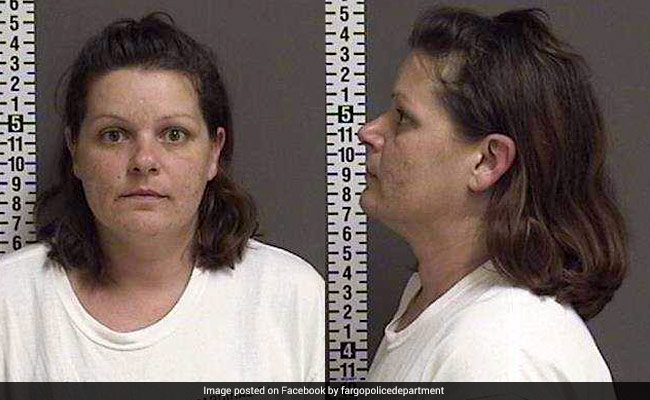 The neighbors downstairs first heard the noise on a Saturday afternoon in August. Bang. It echoed down from the apartment overheard on the third floor of a boxy bone-white seven-unit building in Fargo, North Dakota. Bang. Bang. Bang. It seemed to be coming from the bathtub.

The tenants below were used to the ceiling-shaking fights between the couple living upstairs - Brooke Crews and William Hoehn - so they didn't give the sound much thought. As the neighbors would later tell a local newspaper, the ruckus continued for about 20 minutes, then they heard the shower kick on. Nothing remarkable.

But as authorities now know, the banging upstairs coincided with the last time Savanna LaFontaine-Greywind was known to be alive.

A beautiful 22-year-old with long brown hair and bright green eyes, LaFontaine-Greywind was living with her mother, father and brother in the building's basement apartment. It was temporary. She was about to launch a new phase of her life.

A year earlier LaFontaine-Greywind, a Native American, had moved to Fargo for a new position as a nursing assistant at a local elderly home. She had just signed a lease for a new apartment with her boyfriend of seven years, Ashton Matheny. She was due to give birth to the couple's first child - a girl - in late September.

But LaFontaine-Greywind disappeared somewhere inside the apartment building on Aug. 21, leaving her car parked in the lot, her wallet behind, and a freshly delivered pizza cooling at home.

Days later, police would find her missing child alive inside the building, leading to more questions than answers. Eight days after she vanished, LaFontaine-Greywind's body was discovered floating in a river six miles north of Fargo, triggering a chilling murder saga that has frayed nerves across western North Dakota and beyond.

This week authorities are a step closer to filling in the picture.

On Monday, Brooke Crews, the third-floor neighbor, pleaded guilty to conspiring to murder the soon-to-be-mom to kidnap her unborn child, the Star Tribune reported. Court documents detail how investigators narrowed their focus on the 38-year-old defendant. Her boyfriend, Hoehn, still faces criminal charges related to LaFontaine-Greywind's death. But gaps in the timeline remain.

As her mother, Norberta LaFontaine-Greywind told the Forum News Service in September, the family had a bad feeling about Crews when she knocked on their door and asked their pregnant daughter to come upstairs to smoke pot two weeks before the disappearance. She declined.

Then on Aug. 21, Crews knocked again with a strange request for LaFontaine-Greywind: for $20, would she act as a model for a dress Crews claimed she was sewing?

LaFontaine-Greywind agreed. Around 1:30 p.m., she texted her mother and boyfriend, explaining she was going upstairs to do the favor.

Later in the afternoon, LaFontaine-Greywind wasn't around to take her brother to work as previously arranged. Her brother went upstairs to Crews apartment, but no one answered the door. Her father, Joe Greywind, also tried knocking, according to the Duluth News Tribune. Crews answered, telling Greywind they were not finished with the dress yet.

When the pregnant young woman wasn't at home by late afternoon, her mother panicked.

"I immediately knew something was wrong because her car is here," Norberta LaFontaine-Greywind told the News Tribune. "She's eight months pregnant. Her feet were swollen, so she wouldn't have taken up walking like that. There was pizza here that she hadn't eaten. She would not just leave that lady's apartment and go somewhere."

LaFontaine-Greywind did not respond to repeated text messages and calls from her family. When the mother contacted her daughter's boyfriend, he also said that he had not heard from her. "I started freaking out," Matheny told WDAY-6. "That's what I've been doing ever since."

Around 4 p.m., the family contacted the Fargo police.

Over that weekend, police performed three searches of Crews and Hoehn's apartment, but they reportedly found no clues. By Tuesday, a deputy chief with the department told a local news outlet "there is nothing to suggest criminal activity" in the young woman's disappearance. Norberta LaFontaine-Greywind would later tell the Forum News Service the family did not feel the police initially took the case seriously.

"I felt like they just had no care," she said.

With LaFontaine-Greywind still missing, rumors started flying around Fargo, including one about a convicted sex offender living in the third-floor apartment in the missing woman's building. On Wednesday night, Blake Gumprecht, a reporter with the Forum News Service, went to the building to check on the report.

"As I walked up the stairs in the apartment building and approached Apartment 5, I heard a loud machine noise coming from the apartment," Gumprecht later wrote in a piece. "It sounded like construction noise, possibly an industrial vacuum, noise you might hear if an apartment was being rehabbed. It was too loud to be a normal home vacuum cleaner or any other common domestic machinery."

A woman answered the door. "I asked her name, but she wouldn't tell me," the reporter wrote. The sex offender tip turned out to be bogus. But Gumprecht later realized the woman at the door was Crews.

The same day, Fargo police hit a significant lead in the case. When interviewing co-workers at a Fargo roofing company where Crews's boyfriend worked, they learned he had been talking about a new baby at home. The evidence was enough for a search warrant, and on Thursday afternoon authorities raided the third-floor apartment. Inside, they found Crews and a healthy newborn.

Crews and Hoehn were arrested. Police have not publicly explained where the child was during their first three searches of the apartment. DNA testing later confirmed the child was LaFontaine-Greywind's.

On Sunday, Aug. 27, kayakers paddling on the Red River discovered the missing woman's body a few miles across the Minnesota border. LaFontaine-Greywind was wrapped in plastic and duct tape, The Washington Post reported at the time.

In an interview with police after his arrest, Hoehn told police he had come home on the Sunday of the disappearance to find Crews cleaning up blood in their apartment bathroom, according to court documents. She then showed her boyfriend the newborn.

He also admitted to disposing of garbage bags with bloody towels and shoes in a dumpster.

When Crews sat for her own interview with police, she told an odder story: when LaFontaine-Greywind was at her apartment, Crews claimed she taught the young woman to break her own water and induce birth, The Post reported. The young woman then later gave the baby to her, Crews claimed.

But this week, Crews admitted to her role in the killing. "The defendant lured Savanna LaFontaine-Greywind, who was eight months pregnant, up to her apartment as part of a conspiracy to murder Savanna and steal her unborn baby." the prosecutor told the court in the short hearing, according to the Duluth News Tribune.

Hoehn has pleaded not guilty to all the charges he is currently facing. A trial is set for March.

Promoted
Listen to the latest songs, only on JioSaavn.com
In September, Ashton Matheny was granted custody of his daughter, the Duluth News Tribune reported. Before her death, he and LaFontaine-Greywind had picked out the girl's name: Haisley Jo.