Everest on hold as Sherpas call for fairer pay 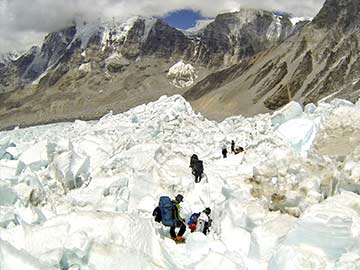 Kathmandu: Over the years, as Mount Everest attracted larger crowds of amateur climbers from the West, the Sherpas adjusted: To a slower ascent, to traffic jams, to bulging loads of gear. Every spring some new frustration would get them talking, then recede with the end of the season.

This was the year that frustration boiled over. The avalanche that killed at least 13 Sherpas last Friday has prompted an extraordinary labor dispute, as Everest's quiet workhorses took steps Tuesday to shut down the mountain for the season, demanding that the government share proceeds from what has become a multimillion-dollar business.

Tensions were coursing through Everest's base camp Tuesday after a rowdy meeting where, according to people who were present, two-thirds of the Sherpas opted to cancel planned ascents. As a few teams of climbers packed their bags and began the long journey out of the Himalayas, two veteran expedition leaders left the camp by helicopter for an emergency meeting with Nepali officials in an effort to avert a shutdown.

"I would like to go back to my Sherpas and say, 'Look, guys, I got what you wanted,'" said Phil Crampton, the owner of Altitude Junkies, a mountaineering company, in a telephone interview. "We want the Sherpas happy, we want the government happy, and we want our clients happy. The bottom line is that if at the end of the day, the Sherpas aren't happy, we will comply and cancel our expedition."

Mount Everest is now far more popular than most of the world's other high peaks, with as many as 600 people a year reaching the summit, more than half of them Sherpas, who are mostly members of a small ethnic group renowned for their skill at mountaineering.

Foreign climbers pay professional Western guides as much as $100,000 to ease their path up the mountain. Altitude Junkies, for instance, charges $42,500 for a 60-day expedition, which includes extras like helicopter flights and "two personal Sherpas on summit day." Of that, $11,000 goes to the Nepali government for a climbing license, and issuing such licenses has netted the government $3 million to $4 million annually in recent years. Money also pours into the local economy, including hotel rooms, nights in teahouses, local cellphone use and the hiring of yaks and porters to carry supplies up the mountain.

The mountaineering companies pay Sherpas, who generally outnumber foreign climbers by 2 to 1. In a country where the average per capita income is around $700, Everest's Sherpas can make $3,000 to $5,000 in a season, supplemented with bonuses if they reach the summit. But they face extraordinary risks, and some have expressed frustration as life on the mountain has changed. Two years ago, after a harrowing season, a guide named Pemba Janbu Sherpa complained that foreign clients, coming "with money but without technical training," were forcing him and his colleagues into dangerous situations.

"Climbers actually say, 'I've paid $50,000, you are here to work for me, and you have to accompany me,'" he told an analyst studying Everest. "The mountain itself feels like it is losing its value. Just about everyone seems to want to climb it by paying a Sherpa who will ensure reaching the summit."

The 16 Sherpas killed in Friday's avalanche - 13 bodies were retrieved, and three remain missing - were crossing the Khumbu Icefall, a notoriously dangerous ice field. Foreign climbers keep their time on this section to a strict minimum, but Sherpas cross it many times a season, ferrying gear up from one camp to another. It was the largest single-day loss in Everest's history, and an unprecedented blow for the Sherpas.

Nepali authorities infuriated many of the Sherpas by offering 40,000 rupees, or about $408, as compensation to the families of the dead. Tempers flared Monday when a group of Sherpas marched in a procession with the bodies of six of the dead, said Mukunda Bista of the Nepal Youth Foundation.

"When it ended in the middle of town, they were very, very angry with the government," Bista, who is based in Katmandu, said in a telephone interview. "This time, it really is a crucial moment. If the government is not taking it seriously, there might be more agitation and fighting."

By Sunday night, some of the Sherpa guides at the base camp were advocating canceling the rest of the season's expeditions on Everest, confronting international climbers with the prospect of abandoning plans that had cost them tens of thousands of dollars and been years in the making. Many, in their initial comments on social media, were sympathetic to the Sherpas.

"We clients, Western climbers, are here by choice," Isaiah Janzen, an engineer from Iowa, wrote on his blog. "We pay to come here and test ourselves. The Sherpas, people that carry our loads, set up our tents, cook for us, set up the ropes on the mountains, they are here because they are paid 10-15 times the average Nepali salary to do this for two months."

He added, "I would still like to climb this mountain, but there are things at stake more important than my selfish, arrogant and egotistical summit ambitions."

But various people at the camp, both foreigners and Nepali guides, said tensions were growing as the prospect of abandoning the ascent became real.

After a prayer meeting Tuesday ended in a show of hands in favor of canceling, Roshan Bhattarai, a climbing guide with Himalayan Ecstasy, said foreign climbers "pointed out that they have spent so much money, so how can we leave?"

"There were so many Sherpas in numbers, and I think foreign climbers couldn't express what they want clearly," he added.

Tendi Sherpa, of the Nepal National Mountain Guide Association, said 200 of the roughly 300 Sherpas at Tuesday's meeting were in favor of canceling all planned ascents. "Everyone is working hard not to have any violence," he said.

Other popular summits in Nepal, like Annapurna, were unaffected by the Sherpa agitation.

A list of demands presented to Nepal's Ministry of Tourism gave officials until Monday to respond, according to Alan Arnette, a climbing expert who runs a respected mountaineering website. On Tuesday, the ministry announced that it would satisfy some of the demands put forward by Nepali guides at the base camp, including raising minimum insurance rates for Sherpas to about $15,000, erecting a memorial to lost guides and creating a relief fund from climbers' fees to help support the families of the dead.

Some groups were already leaving the base camp Tuesday, including about 30 of the 341 foreign climbers on the mountain, Arnette said. But most, he added, were waiting to see the results of negotiations between the guides and the government.

"That really shook the local people," he said. "We have never seen this much."

Although he had heard of the government's concessions Tuesday, he was skeptical. "It's Nepal," he said. "Unless you see the money with your eyes, you can't be sure."

Crampton, a British-born expedition leader who has ascended Everest 11 times, said he was hoping that he and his clients would also not be forced to leave camp. If this season's ascents were canceled, he said, the government would keep fees already paid, and the fear of losing future investments could deter foreign climbers for years to come.

At an emergency meeting scheduled for Wednesday morning, Crampton said he planned to remind Nepali officials that "we put an awful lot of money into the economy, and we feel that the Sherpas have been given a very, very hard time in the past."

Promoted
Listen to the latest songs, only on JioSaavn.com
"We had a historic accident, and now we've got a historic moment, where we could close down the whole season," Crampton said. "I feel like I'm doing something I should have done a long time ago."