Even The Walking Dead Have to Make a Living Somehow 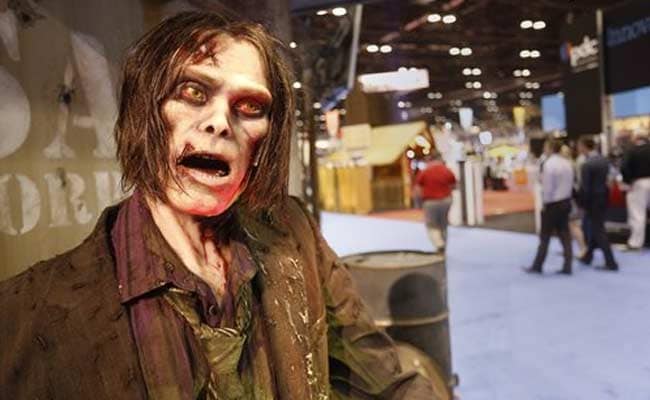 Representational image: Zombies are so popular that intellectuals feel obliged to analyze them. From The New York Times to the Atlantic magazine, every publication has run stories on them. (Associated Press photo)

My ears are ringing, my hands are bleeding and Miranda Lambert won't stop howling inside my head. Take it from me, folks: Being a zombie is harder than it looks. I know because I was a zombie for a day. It's the kind of experience you don't want to miss, unless you happen to be sane.

I became a zombie on Oct. 24 at Silver Eagle Group, which is an upscale shooting range in Ashburn. For three years, SEG has helped prepare Americans for the coming zombie apocalypse by staging an annual day-long live-shooting training session for Glock-toting civilians determined to fight back when the walking dead start trudging down Main Street, chewing pedestrians.

"Panic has spread," read an ad for this year's Zombie House: Apocalypse. "The walking dead continue to swell in the shadows, harvesting the city of its inhabitants. You will have to fight your way through back alleys and abandoned buildings ... without falling victim to violent zombies hungry for human guts. Are you up for the challenge?"

I'm America's foremost pseudo-war correspondent. I've covered fake battles for decades. I covered the 1999 Knob Creek Machine Gun Shoot, where 6,000 people gathered in Kentucky to blast holes in junk cars and dead refrigerators. I covered the 2001 Mock Prison Riot, where 1,400 prison guards traveled to West Virginia to shoot smoke grenades and fake tear gas at pretend convicts. I covered ... well, you get the idea. Whenever adult Americans play goofy games that involve shooting stuff, The Washington Post's editors send me. It's an honor, sort of.

So I called SEG and spoke to Lisa Endress, who was running the apocalypse. She explained how it works: Aspiring zombie-killers pay $99 to charge through a maze of dark, smoky rooms for 25 minutes, carrying modified Glock pistols and shooting plastic pellets at people who are paid $120 for a 10-hour day of impersonating zombies and getting shot with plastic pellets. 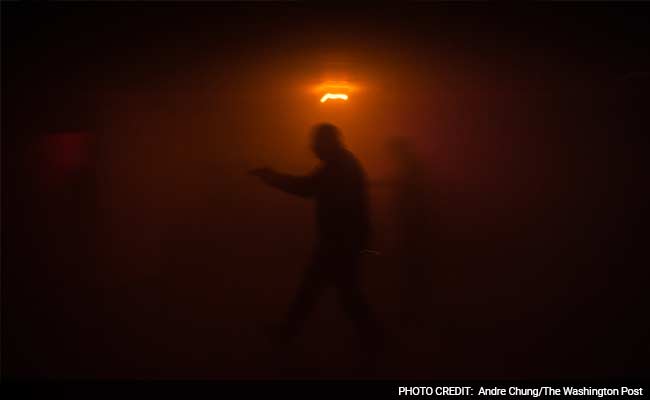 I wanted to cover both sides, so we made a deal: She'd let me spend 25 minutes shooting zombies, and I'd spend the rest of the day being a zombie.

When I arrived at SEG early that morning, a dozen people were deep into pre-apocalypse preparations, signing a four-page document, which declared in dense legalese that you couldn't sue SEG even if the roof fell on you or a zombie chewed your nose. I started talking to one of the day's 136 zombie-hunters.

"I'm former Army so I like to shoot," said Jeremy Warren, 41, an IT guy from Falls Church, Virginia. "I'm looking forward to putting rounds downrange."
Warren was wearing a T-shirt that read, "That Which Does Not Kill Me ... Should Run." He was also wearing a kilt. So were the other three guys on his team. One of them, 32-year-old Mike Laggini of Ashburn, had a GoPro camera strapped to his forehead.

Why kilts? I asked.

"The first time, zombies ran at me and one of them grabbed me, and I wasn't fast enough to shoot them," she said. "But the second year, I was clearing the room." 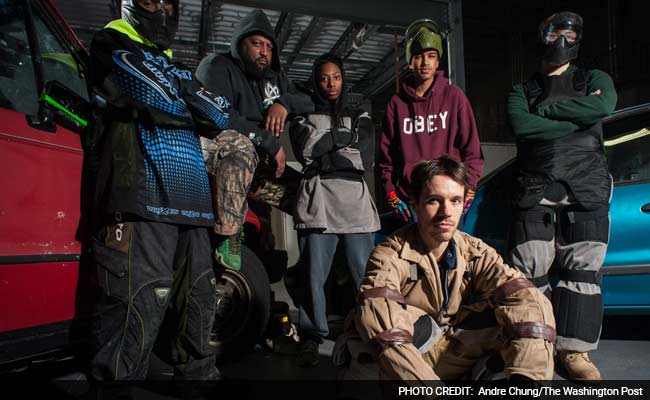 Zombies are so popular that intellectuals feel obliged to analyze them. The New York Times ran an essay called "My Zombie, Myself" and the Atlantic magazine countered with an essay called "Our Zombies, Ourselves," in which writer James Parker revealed the zombie's secret meaning: "He is the consumer, the mob, the Other, the proletariat, the weight of life, the dead soul."

But this is no time for deep thinking. Team Kilt is back from the apocalypse. How was it, guys?

"I shot Jeremy by mistake," Mike Laggini admitted. "It's kind of tough in the heat of battle to look for a kilt."

They left smiling, off to drink beer.

A few minutes later, I went zombie-hunting with a team that included Alex Phelps, 21, a law firm employee, and Diego Tardio, 20, who works at Trump National Golf Club. Grayson Gaylor, a SEG worker, showed us how to use the Glock pistols, then outlined our mission: We were to run through a maze of rooms, locate "Patient Zero," an 80-pound dummy, and carry him to a bread truck.

"It's gonna be dark, it's gonna be hectic and zombies will be attacking you," Gaylor warned. "Shoot them till they go down like a sack of potatoes."

"What if we get grabbed by a zombie?" Tardio asked. He looked nervous.

We charged into the apocalypse, racing down dark hallways. We climbed out windows and stumbled blindly into smoke and fog. I'd love to describe the rooms, but I couldn't see a thing. I kept tripping over my teammates' feet while sirens screamed and zombies staggered out of dark corners. I shot only one zombie but stepped on several others who'd been shot by my teammates. One zombie responded to my heavy foot with a groan that sounded distressingly real.

"Oops, sorry," I said. (Are you supposed to apologize to zombies?)

Somehow, we managed to find Patient Zero and load him into the bread truck before zombies ate us. Mission accomplished.

"That was awesome!" Phelps said. "A lot more intense than I expected."

Now it was time for me to become a zombie. A SEG worker handed me protective gear - a padded shirt and a helmet with a face mask and visor - then led me to a dark room full of foul smoke. A refrigerator stood there, its door open to reveal a Day-Glo human skull. A speaker blasted music loud enough to shatter glass, a woman singing, "I cut my bangs with some rusty kitchen scissors. I screamed his name till the neighbors called the cops. ..."

Suddenly, a guy stepped out of a shadow and fired a shotgun. It was loaded with blanks but loud enough to shatter diamonds. A minute later, zombie-hunters burst in. They saw me and opened fire. Pellets bounced off my padded shirt. I figured I'd better fall down before they fired again. I hit the floor and lay there, watching as two more zombies attacked them, growling theatrically. The shooters blasted away. The zombies collapsed. The shooters ran out.

We zombies stood up. The music ended and there was a brief moment of silence. I started to introduce myself to my fellow zombies, but the music started blaring again - the same song: I cut my bangs with some rusty kitchen scissors. ...

The guy with the shotgun fired again. More zombie-hunters rushed in. I stumbled toward them, arms outstretched, growling. They blasted me until I collapsed. The hunters fled. The song ended. There was a brief silence. Then the song started again. I cut my bangs ...

"Is it always the same song?" I asked a fellow zombie.

"Is it always the same song?"

The shotgun boomed, the hunters burst in and shot us, we fell down, they scooted off, the music stopped, then started again: I cut my bangs ...

"What song is this?" I yelled.

It was, I later learned, Miranda Lambert singing "Mama's Broken Heart." We heard it 20 times? Fifty? A million?

Finally, the guy with the shotgun announced it was lunchtime. We trudged down the hall to a room where most of the 24 zombie impersonators lounged in chairs, scarfing down pizza and sandwiches. Most were students and all were male except Stacy Melton, 29, a stay-at-home mother of three.

"How do you like being a zombie?" I asked her.

"It's a lot of fun," said her husband Mark, 30. He rolled up his sleeves to reveal two small, bloody cuts. "I got hit here and here."

Other zombies showed off their wounds. The little plastic pellets bounce harmlessly off helmets and padded shirts, but they sometimes slice through clothing and draw blood. The neck shots are the most painful, one zombie reported.

Cameron Childress, 16, displayed a bloody wound on his chest. The Stone Bridge High School student wasn't wearing a protective shirt, and the pellet that gored him had pierced his hoodie and then his T-shirt, which read: "Sarcastic Comment Loading. Please Wait."

Despite his injury, Childress was enjoying impersonating a zombie in the room where zombie-hunters loaded Patient Zero into the bread truck. "I hid under cars, and then I'd slide out and scare people," he said. "Scaring people is the fun part."

When the afternoon's apocalypse began, I followed Childress into the bread truck room because I wanted to escape Miranda Lambert.

It worked: Lambert wasn't singing in there. Instead, speakers blared a hellish mix of air-raid sirens and machine-gun fire. It sounded like Megadeth's greatest hits performed by an orchestra composed of 4,379 jackhammers.

Zombie-hunters burst through the door. I trudged toward them, arms extended. They blasted me. I fell to the floor and noticed a bloody cut on my left hand. A wound! Now I was a real zombie! I watched as they loaded Patient Zero into the bread truck and strutted off, savoring their victory.

More hunters appeared, firing like crazy. The problem with working in the game's final room is that the zombie hunters have no reason to conserve ammo. When they spot you, they fire everything they've got. Within an hour I was bleeding from two more cuts and feeling like a human pincushion.

It was too noisy to talk to my fellow zombies, so I started talking to myself.

"Pete," I said, "you're 63 years old and you're spending a beautiful fall day stumbling around a smoky room, getting shot by zombie hunters. You think maybe it's time to rethink your career choices?"

I sneaked through the shadows and slipped out a door.

Outside, the sun was shining and birds were chirping. My ears were ringing, my hands were bleeding and Miranda Lambert was howling inside my head.

I staggered to my car and drove away. Let somebody else be America's foremost pseudo-war correspondent. I'm outta here.