Even After Defeat, ISIS Sows Fear In Syria's Manbij 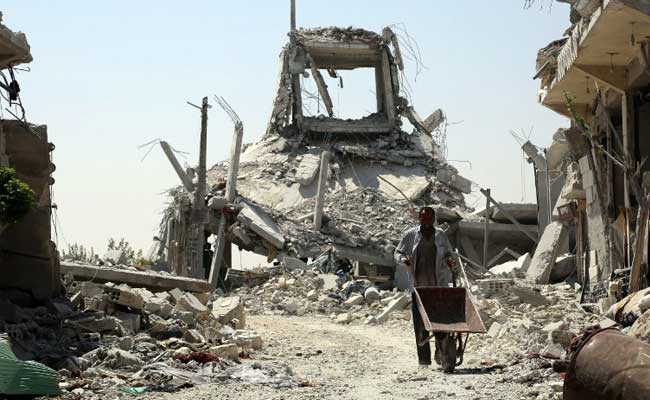 Roofs and walls of homes in northern Syria have crumbled into small mountains of rubble.(AFP)

Syria: When Fatima and Mohammad pushed open their front door, elated to return to Syria's Manbij after it was retaken from jihadists, their weeks-long dream of coming home turned into a nightmare.

The blast could be heard across the ruined town in northern Syria, where US-backed Arab and Kurdish fighters chased out the last remaining ISIS group fighters at the weekend.

ISIS militants withdrew after making a last stand in the centre of Manbij against the Syrian Democratic Forces, leaving behind them a booby-trapped town.

AFP journalists arrived in Manbij on Sunday to the sound of a massive blast, the first of several they heard throughout their tour of the town.

Moments after the explosion at her front door, 40-year-old Fatima burst back into the street, her contorted face covered in tears.

She begged someone to drive her to the hospital behind the ambulance carrying her husband Mohammad, who was wounded to the face and leg in the blast.

He was taken to the Kurdish-majority border town of Kobane further northeast for treatment, as all of the clinics in Manbij are out of service.

"Everyone was begging Mohammad to be patient and not open the door, but he insisted that he wanted to check if our home had been looted," Fatima told AFP, her voice shaking as she wiped tears from her tired face.

Like Fatima and Mohammad, thousands of others are eager to return to their homes in Manbij, which ISIS seized in 2014 and used as a key transit town along the jihadists' supply route from Turkey.

On Sunday, pick-up trucks lined up at a checkpoint on the edge of the town, transporting home hundreds of civilians -- including children, who were beaming from ear to ear and holding up their fingers in a v-shape for victory.

But they are returning to a nearly unrecognisable town, ravaged by nearly two months of fighting and still undergoing demining operations by the SDF.

"Manbij is liberated" is scrawled on low concrete walls across the town -- but so are warnings to "Watch out for mines".

Roofs and walls of homes have crumbled into small mountains of rubble.

On the edges of roads and on balconies, men and young children gingerly sweep away dust and debris.

"The mines are exploding everywhere. When we open a door, when we step into the street," said Hassan al-Hussein, one of Fatima's neighbours.

"My cousin was killed yesterday when a mine exploded," he said, staring blankly from behind his eye glasses.

"Once we demine the whole town, we can live. On top of that, there's no water, no flour, and none of the clinics are functioning," he said.

Nearby Najwa, 41, kept her seven-year-old daughter Amani close by her side as she carefully entered her home for the first time since ISIS was pushed out.

The pair tiptoed through a blanket of concrete debris, staring at walls blackened by a fire.

"They burned everything. This was my bedroom as a child -- it breaks my heart to see it like this," Najwa said.

"The jihadists entered our towns three years ago -- but it feels like 30 years have passed."

ISIS's brutal reign over Manbij left even its youngest residents with traumatising memories.

"They hit anyone who tried to walk to school and said we were infidels," Amani chimed in.

"Even television was banned," she recalls, her voice breaking before taking refuge behind her mother's dress.

The jihadist group has implemented its ultra-conservative Islamist ideology across swathes of territory in Iraq and Syria where it declared a self-styled "caliphate" in 2014.

As ISIS fighters withdrew from the town on Friday, some women burned the black robes that the jihadists imposed on them, while men who had lived under a shaving ban cut their beards.

But some legacies of ISIS rule remain.

An illustration on the wall of one Manbij school depicts a woman fully covered in black and wearing a face veil beside an explanation of the importance of modesty.

"They only taught children Koranic verses, how to carry arms and how to kill," said Mohammad al-Abdallah, a 53-year-old retired teacher.

"Even little girls were forced to cover up completely," said 11-year-old Aya.

"Now that I can wear whatever I want, I'm happy."