A meeting between the arch-adversaries would be historic but also come under a political cloud, with Trump's Democratic rivals on Tuesday announcing an impeachment inquiry against him. 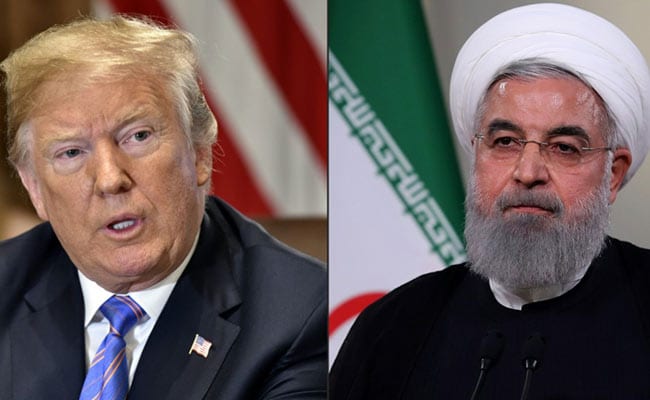 A meeting between the arch-adversaries would be historic but also come under a political cloud, with Trump's Democratic rivals on Tuesday announcing an impeachment inquiry against him.

"If he leaves the country without meeting with President Trump, honestly this is a lost opportunity because he will not come back in a few months," Mr Macron said.

"And President Trump will not go to Tehran, so they have to meet now," he said, as Mr Johnson voiced agreement.

Mr Macron has spearheaded efforts to arrange a historic summit, selling Trump on the idea last month as he hopes to salvage a 2015 denuclearization accord with Iran.

But tensions have flared anew after attacks this month on Saudi Arabia's oil infrastructure. The United States blamed Iran, a finding backed this week by France, Britain and Germany.

Mr Trump earlier voiced willingness to meet Mr Rouhani but made clear Tuesday that he would not ease economic pressure on Iran -- a condition set by Mr Rouhani for any meeting.

"As long as Iran's menacing behavior continues, sanctions will not be lifted. They will be tightened," a grim-faced Mr Trump told the General Assembly.

"All nations have a duty to act. No responsible government should subsidize Iran's bloodlust," he said.

Mr Trump is set to address a news conference on Wednesday that will no doubt be dominated by the impeachment moves.

He has come under fresh fire over allegations he pressured the president of Ukraine to investigate the son of former US vice president Joe Biden, who is seeking to challenge Mr Trump in next year's election.

Mr Rouhani -- responding to Mr Trump's speech in an interview with Fox News, which the tycoon president is known to watch avidly -- said that the withdrawal from the nuclear accord had badly shaken confidence.

"We must create mutual trust," Mr Rouhani said. "If the government of the United States of America is willing to talk, it must create the needed conditions."

But German Chancellor Angela Merkel, who also called for a Rouhani-Trump meeting, said after seeing the two leaders that Iran's condition on sanctions was "unrealistic," although Mr Macron said that "conditions have been met for a rapid resumption of negotiations."

Mr Macron warned in a speech to the General Assembly of further risks in the Middle East, where Saudi Arabia is also mounting a devastating air campaign in Yemen.

"The risk is that there would be a flare-up based on a miscalculation or disproportionate response," Mr Macron said.

"I am not naive and I don't believe in miracles but rather in the courage to make peace, and I believe that the United States, Iran and all signatories of this (nuclear) accord have that courage," he said.

Calls multiply for dialogue
Despite his strong words, Mr Trump is known for his fondness of made-for-television drama, as witnessed in his three meetings with North Korean strongman Kim Jong Un, and for following last-minute gut instincts.

Pakistani Prime Minister Imran Khan said that both Mr Trump and Saudi Crown Prince Mohammed bin Salman, whom he met on his way to New York, had asked him to mediate with Iran.

"Trump asked me if we could de-escalate the situation and maybe come up with another deal," Mr Khan told reporters.

"I can't say anything right now more than this, except that we're trying and mediating," he added.

Pakistan has a close relationship with Saudi Arabia but also maintains ties with Iran, representing its interests in the United States.

Mr Trump, however, said Monday that he was "not looking for any mediators," saying of Iran, "they know who to call."