The princess said she feared for the safety of her family since she twice found a gun on her bed a year ago, with the muzzle pointing to the door and the safety catch off, Judge Andrew McFarlane wrote in a ruling released Thursday. 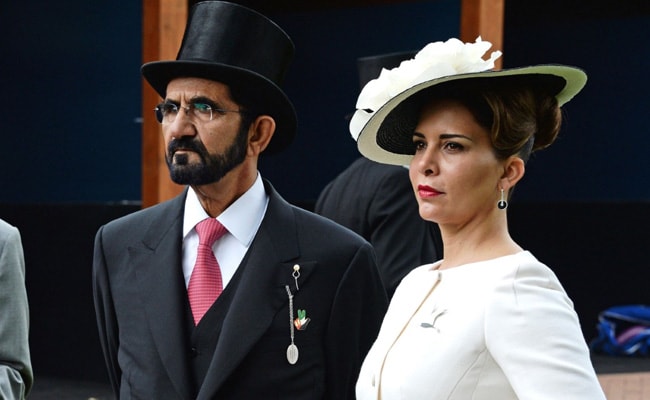 Dubai's ruler Sheikh Mohammed bin Rashid Al Maktoum conducted a campaign aimed at "intimidating and frightening" his estranged wife Princess Haya Bint al-Hussein before she fled to the UK, a London judge has ruled in a case over the welfare of their two young children.

The princess said she feared for the safety of her family since she twice found a gun on her bed a year ago, with the muzzle pointing to the door and the safety catch off, Judge Andrew McFarlane wrote in a ruling released Thursday. He granted protective orders for the children as well as an interim injunction against Sheikh Mohammed barring threatening or violent conduct.

The couple fought the case in London's family courts after Princess Haya, 45, flew to the UK in April. The sheikh initially sought an order forcing the two children to return to Dubai before later dropping the attempt, McFarlane said.

The 70-year-old sheikh is determined to re-establish "a viable, regular relationship with each of the children," the judge said.

The ruling by one of Britain's most senior judges will be a huge embarrassment to the royal family. It leaves questions about governance in Dubai after the princess's attorney Charles Geekie argued that the sheikh deployed the full power of the state to "threaten, intimidate, mistreat and oppress."

"These findings, taken together, demonstrate a consistent course of conduct over two decades where, if he deems it necessary to do so, the father will use the very substantial powers at his disposal to achieve his particular aims," the judge said.

Sheikh Mohammed is credited with turning Dubai into a major tourism and business hub. While Dubai's government is treating the case as a private matter, the decision against its ruler contrasts with the image of openness and ease of doing business presented by the emirate.

Although the sheikh himself didn't directly participate in the proceedings, even after being invited to do so by the judge, McFarlane conducted a "fact-finding" process as part of his ruling.

"As a head of government, I was not able to participate in the court's fact-finding process, this has resulted in the release of a 'fact-finding' judgment which inevitably tells only one side of the story," the sheikh said in a statement via his lawyers.

Princess Haya's lawyers declined to comment on her behalf.

The most explosive allegation made by the princess wasn't substantiated by the judge. The princess said that Sheikh Mohammed had sought to make arrangements for a marriage between his youngest daughter, then 11, and the Crown Prince of Saudi Arabia, Mohammed bin Salman bin Abdulaziz Al Saud.

The princess says she was told by a trusted police officer that a member of the sheikh's family had visited Saudi Arabia in February last year to discuss a marriage. The allegation was "hearsay," the judge said.

The judge said that two older daughters by another marriage, Sheikha Latifa and Sheikha Shamsa, had themselves been detained in Dubai. Princess Haya described how in 2018 Latifa, who's now 35, was abducted by an armed Indian commando team at sea -- allegations that were upheld by the judge.

Princess Haya said that her relationship with Sheikh Mohammed deteriorated after she tried to help Shamsa and Latifa. The sheikh also became aware of an earlier affair that the princess had with one of her bodyguards, the judge said.

She said she discovered Sheikh Mohammed divorced her under Shariah law in February 2019.