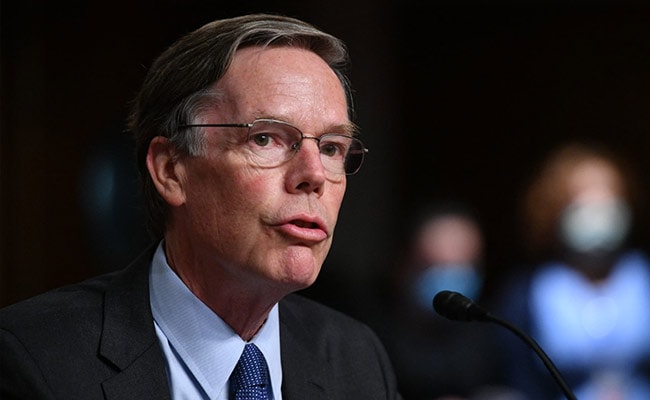 China's Foreign Ministry on Thursday lashed out at Nicholas Burns, President Joe Biden's nominee to be the next US ambassador to Beijing, for his sharp criticism of the Communist giant's hardline policies over Xinjiang, Tibet, Hong Kong and Taiwan, saying he should not underestimate China's strong resolve to defend its rights.

Mr Burns took a tough stand on America's ties with China during his Senate Foreign Relations Committee's confirmation hearing on Wednesday. Burns said the US was right to continue its "one-China policy" but that Washington was also right to oppose China's unilateral actions that undermine the status quo and undermine the stability of the region.

Reacting to his comments, Chinese Foreign Ministry spokesman Wang Wenbin said, "We advise Burns to be keenly aware of the overall trend of world development and people's aspiration, learn the real situations of China objectively, view China and China-US ties in a rational manner and avoid underestimating the strong resolve, determination and capability of the Chinese people to defend their rights."

"We hope he will speak and act in a more constructive manner, and play a constructive part in promoting China-US relations and the friendship between the two peoples," Mr Wang said.

Mr Burns told members of the Senate Foreign Relations Committee during his confirmation hearing that reports of China building up its nuclear arsenal are concerning, and called on Beijing to halt its "genocide in Xinjiang, its abuses in Tibet, its smothering of Hong Kong''s autonomy and freedoms, and its bullying of Taiwan."

If confirmed, Mr Burns would fill the ambassador role, which remained vacant for a year amid ongoing tensions between US and China, a relationship he called "complicated and consequential."

Mr Burns, who served as the Under Secretary of State for Political Affairs from 2005 to 2008, said the "Chinese genocide in Xinjiang and abuses in Tibet, its smothering of Hong Kong''s autonomy and freedoms, and its bullying of Taiwan are unjust, and must stop".

Beijing's recent actions against Taiwan are especially objectionable and the US is right to continue to adhere to its one-China policy, he said.

"We are also right to support the peaceful resolution of disputes, and to oppose unilateral actions that undermine the status quo and stability in the Indo-Pacific," Mr Burns said.

Taiwan considers itself a sovereign state but China views the self-ruled island as a breakaway province. Beijing has not ruled out the possible use of force to achieve unification.

Mr Burns told lawmakers that the US will compete and compete vigorously with China where it should, including on jobs and the economy, critical infrastructure and emerging technologies and cooperate with Beijing where it is in its interest, including on climate change, counter-narcotics, global health and non-proliferation.

"We oppose defining China-US ties as competitive. Even when there is competition between the two sides in such pragmatic areas as economy and trade, it is healthy competition with each other for excellence", he said.

"Issues related to Taiwan, Xinjiang and Hong Kong are purely China''s internal affairs that brook no foreign interference. The accusation of the so-called "genocide" in Xinjiang is an outrageous lie fabricated by a few anti-China scholars in Western countries and US politicians, with the true intention of oppressing and containing China''s development," he said refuting Mr Burns comments.

On Taiwan, Mr Wang said the US should honour its comments to ''One China policy'', which is a political foundation of China-US relations.

He also took exception to allegations against China over the origins of coronavirus which emerged in Wuhan in December 2019.

"Origins-tracing is a scientific issue, but a handful of US politicians are obsessed with politically-motivated studies. Their malicious intention of denigrating and stigmatising China is evident to all," he said.