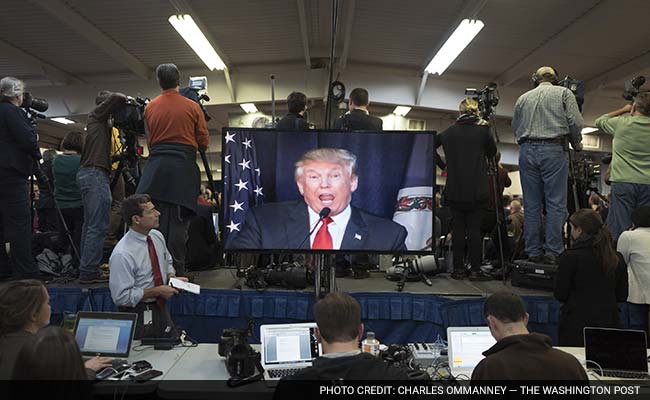 New York: Donald Trump's ad begins with a shot of President Barack Obama and Hillary Clinton. Then comes a U.S. battleship launching a cruise-missile strike. From there it moves swiftly through an explosive montage: The suspects in the recent California terrorist attack. Shadowy figures racing across the U.S.-Mexico border. Islamic State militants.

The narrator, a deep-voiced man, speaks ominously: "That's why he's calling for a temporary shutdown of Muslims entering the United States, until we can figure out what's going on. He'll quickly cut the head off ISIS and take their oil. And he'll stop illegal immigration by building a wall on our southern border that Mexico will pay for."

The spot closes with the image of Trump thundering at one of his rallies, "We will make America great again!"

The Republican presidential candidate's long-awaited and hotly anticipated first ad, which was shared exclusively with The Washington Post, is set to launch Monday as part of a series that will air in the final month before the Iowa caucuses. Trump vowed to spend at least $2 million a week on the ads - an amount that will be amplified by the countless times they are likely to be played on cable news and across social media.

The decision to air television ads - which Trump hinted at for months, though the billionaire mogul has been loath to spend more than he deems necessary - represents a tightly produced new act for a candidate who has fed largely off free media attention.

In an interview on Sunday with The Post, Trump said that he has six to eight ads in production and that his was a "major buy and it's going to go on for months." He said he hopes the spots impress upon undecided voters that the country has become "a dumping ground."

"The world is laughing at us, at our stupidity," he said. "It's got to stop. We've got to get smart fast - or else we won't have a country."

Trump has risen to the top of a chaotic Republican field in part because he embodies voters' rejection of the professional political class. But by taking to the airwaves, he is using at least one of the traditional tools of a modern political campaign.

Trump watched last fall as rival campaigns and their allies spent tens of millions of dollars on TV ads that did not give them much bounce. He said he figured that advertising would be a waste for him, too. Yet as the race tightened with the approach of the new year, some of Trump's supporters, including former adviser Roger Stone, publicly urged him to compete on the air.

Trump said he concluded that he may end up regretting not spending more of his own money to secure the nomination. He said he recalled thinking, "I'm $35 million to $40 million under budget, and to be honest, I don't think I need [ads] because I have such a big lead. But I don't want to take any chances, and I almost feel guilty not spending money."

The first ad, titled "Great Again," makes clear that Trump's closing pitch to voters will be as visceral and arresting as the one he delivers at raucous rallies. It is a full embrace of the most incendiary of his proposals, as opposed to the more biographical spots that some other candidates favor.

One afternoon last week in the candidate's 26th-floor suite at Trump Tower here, the fiery depictions of global terrorism flickered on Trump's face as he stared down at campaign manager Corey Lewandowski's laptop computer to watch the final cut of the ad.

"Play it again," Trump told Lewandowski, nodding approvingly. "I love the feel of it."

The ad, which is 30 seconds long, will air in Iowa and New Hampshire. Lewandowski said Trump eventually plans to advertise in Nevada and South Carolina, whose contests will come later in February.

Airwaves in the early states already are saturated, with campaigns and super PACs in both parties gobbling up advertising time.

For instance, Ohio Gov. John Kasich released the first ad of his campaign Sunday. The spot, which will air in New Hampshire, has striking imagery and highlights Kasich's rough upbringing, personal resilience and governing achievements. The intended takeaway: "John Kasich never gives up."

Advertising by Trump has been limited to radio spots until this week. In November, he made a $300,000 buy for four ads that played in early states, including one that promised he would "decisively bomb the hell out of ISIS."

Trump said he reviewed several proposals for his first television ad but settled on the dark backdrop of "Great Again" because he wanted to showcase what makes him stand apart from the competition: bucking political correctness and speaking in vivid, stark terms about threats to national security.

Although Sen. Ted Cruz (Texas), New Jersey Gov. Chris Christie, Kasich and other Republican presidential candidates have at times echoed Trump, none has gone as far as Trump in recommending that Muslims be barred from entering the country or that a massive, impenetrable border wall be built.

Trump said he wants his ads to hammer that distinction for voters who may still be torn between two or more candidates.

"It's about immigration and safety, and they play hand in hand," he said. "If you look at every poll, I'm the leader on the economy, but it's immigration and ISIS, too. I'm bringing them all together."

Alex Castellanos, a longtime GOP ad creator who is unaligned in the 2016 race, said Trump ought to use his January ads to make a closing argument. He even came up with a slogan: "The strength we want for the change we need."

"Sum it up before the jury," Castellanos said. "I would make the case that America is in decline, about to slip over the precipice, and we need a president as big as our fears and as strong as our adversaries - and only one man has demonstrated that strength."

Trump and Lewandowski declined to name the firm or person responsible for producing the ads. When pressed, Trump said, "He's somebody who's respected very much, somebody's who's had a good record of ads."

Trump said his advertising blitz is being financed chiefly out of his own pocket, although his campaign had raised $3.9 million through the third quarter of last year, much of that in small-dollar donations.

Discussing his vision for the ads, Trump sounded more like a media strategist than a politician. He said that television has a unique aesthetic and that rather than speaking directly into the camera, his ads would intersperse rally footage with stark images designed to draw viewers to focus on the issues of his campaign.

Trump said that as a producer and star of NBC's hit reality program "The Apprentice," he came to appreciate that straight-to-camera ads featuring political candidates are boring or seem manufactured. By contrast, he said, Facebook, Instagram and other social media are more conducive to direct videos.

"We have a lot of the rallies in them and we'll include more, assuming it looks good and is captured right," Trump said. "I don't like sitting down and shooting an ad because I don't think you capture the same energy you see at our events like we had in Mississippi on Saturday," when he drew throngs to a 15,000-seat arena in Biloxi.

Trump added, "You can say the same words, 'Make America Great Again,' and various themes around it, but it's doesn't sound the same as it is when I'm up there on stage in front of 15,000 people going wild."