Donald Trump-Kim Jong Un Meet: The historic summit marks the first face-to-face encounter between a US president and a leader of North Korea. 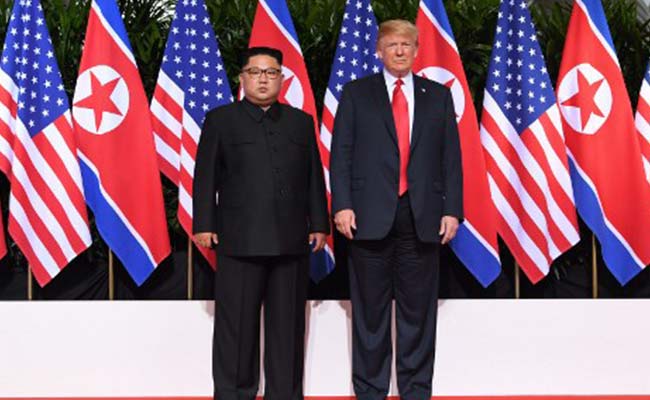 US President Donald Trump poses with Kim Jong Un at the start of their historic summit.

North Korea's Kim Jong Un met US President Donald Trump this morning in Singapore in a historic summit that marked the first meeting between a US President and North Korean leader. Donald Trump earlier labelled the highly anticipated talks as a "one-time shot" at peace. The meeting marks a dramatic shift in relations between the two nuclear armed countries, who last year traded insults and threats of war.

Washington hopes the summit will pave way for denuclearisation of the Korean peninsula. However, both nations have sought to lower expectations for an immediate breakthrough. Donald Trump has described the summit as the first step in what could be a lengthy process, dangling the possibility of inviting the North Korean leader to the United States for a second meeting.

Here are the LIVE updates on Donald Trump's meeting with Kim Jong Un:

"Iran too has changed in the recent months. They are not looking aggressive and do not look at going into Syria anymore. They have been hit with severe sanctions and I am hopeful that they will come around and negotiate a reasonable deal," Trump said.

Jun 12, 2018 14:23 (IST)
"We haven't given up anything on this. We are getting the remains back of people who died in violence. There have been no launches recently by them. They secured the closure of their single primary nuclear test site. They secured commitment of closing that site. We maintain the ability to apply sanctions. I had many sanctions but I talked about a few," says Trump

Jun 12, 2018 14:17 (IST)
"Nuclear is number 1 for me. That is why I did the Iran deal," says Trump while holding a press conference after his meeting with Kim Jong Un in Singapore 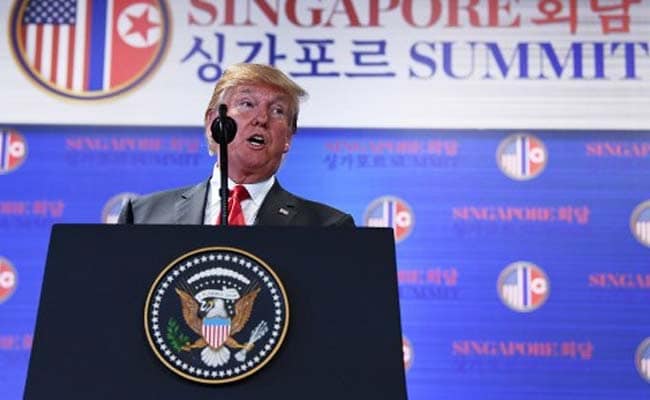 Jun 12, 2018 14:13 (IST)
Responding to a question over inviting Kim Jong Un to the White House, Donald Trump it will be done at the "right time". He further said the situation is rough in North Korea and that he has been reading about denuking a place adding that it takes time. He then said sanctions play a big role in this. "You have a different president, everything will be different. Maybe it wasn't a priority for other people. I don't blame Obama," he said.
Jun 12, 2018 14:05 (IST)
"Human Rights violations were also discussed, but not to the extent of denuclearization. Kim Jong Un is a very smart negotiator. We agreed on some initial measures," said Trump
Jun 12, 2018 14:04 (IST)
Donald Trump said Kim Jong Un is very serious about the denuclearization and has already destroyed a missile testing facility and have agreed to destroy another one. He seemed very sincere to move on, he added
Jun 12, 2018 14:02 (IST)
"It takes a lot of courage to give up weapons and take to the path of peace. All credit to him. Kim Jong Un is a very talented guy who has been able to take this challenge at the age of 26 and be able to manage it as well as he has. No one thought this would be possible, but today we are seeing it happening before our eyes. We all dream of a Korea where all Koreans (north and south) live together in harmony," says Donald Trump
Jun 12, 2018 14:01 (IST)

Jun 12, 2018 13:58 (IST)
"Kim will improve future of people of his country. We dream of a better Northy Korea where there is no darkness of war," says Trump
Jun 12, 2018 13:56 (IST)
Our meeting been very, very good. By giving up its weapons and accepting commerce and embracing trade, North Korea has the potential to be an incredible place: Donald Trump
Jun 12, 2018 13:54 (IST)
"We are ready to write history together. Now we hope the war will end the past does not have to define future. We will honour sacrifices of our ancestors," says Trump
Jun 12, 2018 13:49 (IST)
Meeting with Kim jong "productive" and "honest", says Donald Trump. He also thanked Kim Jong Un for taking this step. "This unprecedented meeting proves that real change is possible," he said.
Jun 12, 2018 13:48 (IST)
Donald Trump begins press conference after meeting with Kim Jong Un
Jun 12, 2018 13:05 (IST)
China's Foreign Ministry said on Tuesday that sanctions relief could be considered for North Korea, after Donald Trump and Kim Jong Un signed a "comprehensive" document aimed at denuclearisation.
Jun 12, 2018 12:40 (IST)
Donald Trump, Kim Jong Un sign a joint statement
Convinced that the establishment of new US-DPRK relations will contribute to the peace and prosperity of the Korean Peninsula and of the world, and recognizing that mutual confidence building can promote the denuclearization of the Korean Peninsula, Donald Trump and Chairman Kim Jong Un signed a joint statement, reports reuters
1. The United States and the DPRK commit to establish new US -DPRK relations in accordance with the desire of the peoples of the two countries for peace and prosperity.
2. The United States and the DPRK will join their efforts to build a lasting and stable peace regime on the Korean Peninsula.
3. Reaffirming the April 27, 2018 Panmunjom Declaration, the DPRK commits to work towards complete denuclearization of the Korean Peninsula.
4. The United States and the DPRK commit to recovering POW/MIA remains, including the immediate repatriation of those already identified.
Jun 12, 2018 12:24 (IST) 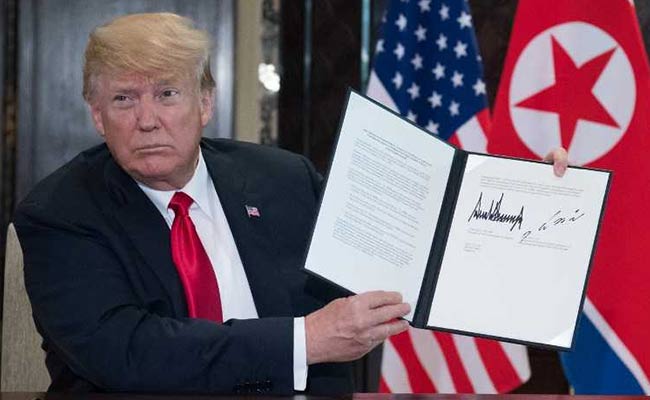 Donald Trump signs "historic" document with Kim Jong Un. AFP image
Donald Trump and Kim Jong-un signed a "very comprehensive" document after meeting which they said was "historic". The US president said that the process of denuclearisation on the Korean peninsula will begin "very soon" and the North Korean leader promising to leave the past behind. US Secretary of State Mike Pompeo also shared a picture of their meeting on Twitter.
Jun 12, 2018 12:08 (IST)
"The world will see a major change," says Kim Jong Un
"Today, we had a historic meeting and decided to leave the past behind and we are about to sign a historic document," says Kim Jong Un while thanking Trump for making the meeting happen. He also said "the world will see a major change".

We are leaving the past behind, says North Korea's Kim Jong-un after historic summit with US President Donald Trump

Jun 12, 2018 12:02 (IST)
North Korea's Kim Jong Un commits to 'complete denuclearisation of Korean Peninsula' in joint text, reports news agency AFP
Jun 12, 2018 11:30 (IST)
China Urges On Full Denuclearisation
China welcomed the summit between the U.S. and North Korean leaders   and urged 'full denuclearisation'. The summit "creates history", Beijing said.
China's top diplomat, State Councillor Wang Yi, said, "At the same time, there needs to be a peace mechanism for the peninsula, to resolve North Korea's reasonable security concerns."
Jun 12, 2018 11:25 (IST)
Denuclearisation To Begin 'Very Quickly': Donald Trump
After he signed the deal, Donald Trump said the denuclearisation process will begin "very quickly". POTUS added he has formed a very special bond with Kim Jong Un, news agency AFP reported. Mr Trump added he was absolutely willing to invite Kim Jong to the White House.
Jun 12, 2018 11:20 (IST)
"This Will Change Our Relationship": Donald Trump
"We're very proud of what has happened today. This will change our relationship... America and North Korea will now view its relationship very differently," Donald Trump said after the documents were signed.
"This has been a wonderful meeting. We have avoided a very dangerous situation... I thank everyone responsible to make this possible. It has been an honour and a privilege to be here with you (Kin Jong Un)...," he added.
"I have been watching the news and what experts had to say... and I can say this for certain that this has turned out to be far more than what anyone could have ever imagined or expected," Mr Trump added. 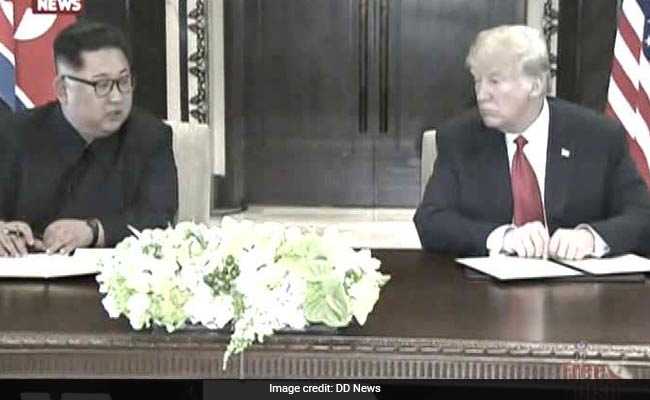 Jun 12, 2018 11:17 (IST)
As they signed the documents, Kim Jong Un, who was earlier addressed as "rocketman" by Trump, said, "Today we had a historic meeting... we are leaving the past behind and look forward to a great future. I thank President Trump for making this possible."
Jun 12, 2018 11:16 (IST)
"You will be getting a copy of the letter that we are signing... it is a very comprehensive document": Donald Trump
Jun 12, 2018 11:14 (IST)
Donald Trump and Kim Jong today signed documents after historic summit.
Jun 12, 2018 10:43 (IST)
The Luncheon
Donald Trump and Kim Jong Un will have lunch together and the menu is nothing less than elaborate. According to a menu card published from the White House, Kim and Trump had a plethora of western, Korean, Chinese and Malay dishes to choose from at the swanky Capella hotel in Singapore. Read about the exotic menu here.
Jun 12, 2018 10:37 (IST)
The Historic Handshake And The Body Language
"It wasn't a straight-out handshake," said Allan Pease, an Australian body language expert and author of several books on the topic, including "The Definitive Guide to Body Language".
"It was up and down, there was an argy-bargy, each one was pulling the other closer. Each guy wasn't letting the other get a dominant grip," he told Reuters by telephone from Melbourne commenting on the 15-second handshake between Donald Trump and Kim Jong Un. Read the full story here.
Jun 12, 2018 10:32 (IST)
Meet "Better Than Anybody Expected": Donald Trump
The meeting went "better than anybody could have expected," Donald Trump said today after the bilateral concluded. The two leaders are also expected to sign unspecified documents.
Jun 12, 2018 09:18 (IST)
On the day of the historic US-North Korea summit, US President Donald Trump's top economic advisory Larry Kudlow suffered a "very mild" heart attack. Donald Trump also tweeted about it.
Jun 12, 2018 09:16 (IST)
The Historic Handshake
North Korea's Kim Jong Un and US President Donald Trump shook hands for 13 seconds this morning. Donald Trump said the first minute of the meeting felt "really great".
Jun 12, 2018 08:07 (IST)

Jun 12, 2018 08:03 (IST)
"We overcame all kinds of skepticism and speculations about this summit and I believe that this is good for the peace": Kim Jong Un
Jun 12, 2018 07:52 (IST)
An expanded bilateral meet is underway between North Korean leader Kim Jong Un and North Korean delegation and US Delegation.

US President Donald Trump, North Korea's Kim Jong Un Meet In Historic Summit In Singapore
With a handshake in Singapore, US President Donald Trump and North Korea's leader Kim Jong Un marked the beginning of their first one-on-one meeting after months of negotiations over narrowing their differences on how to end a nuclear standoff"
Jun 12, 2018 06:52 (IST) 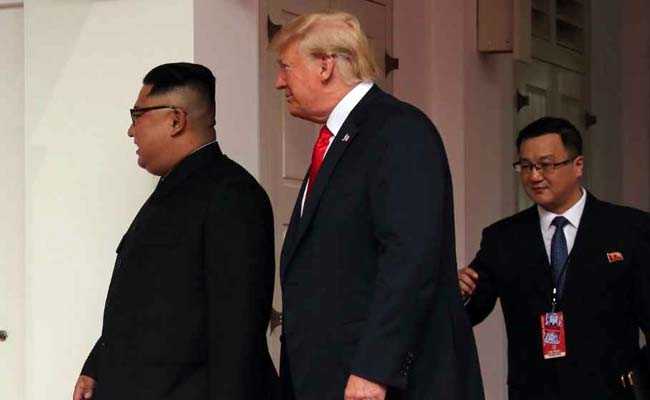 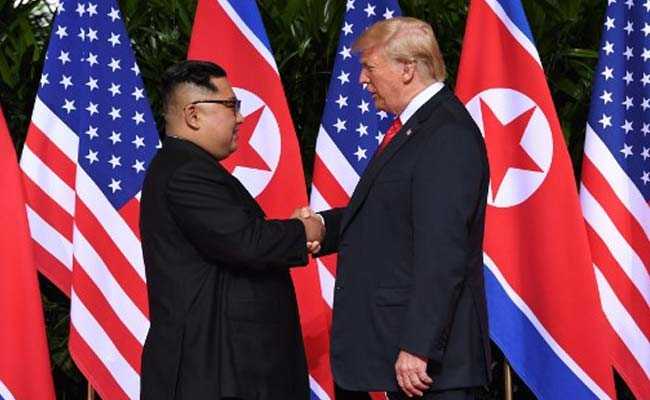 The two leaders shook hands and smiled as they started a historic summit on Tuesday.
For both men, the summit, the first between leaders of North Korea and the United States, is likely to be a defining moment of their careers.
Jun 12, 2018 06:35 (IST)

Trump, Kim Jong Arrive At Summit Venue For Historic US-North Korea Meet
North Korean leader Kim Jong Un and U.S. President Donald Trump reached the venue of their historic summit in Singapore on Tuesday, after both sides sought to narrow differences over how to end a nuclear standoff."
Jun 12, 2018 06:14 (IST)
Donald Trump's motorcade arrives at the Capella hotel, the venue of the summit 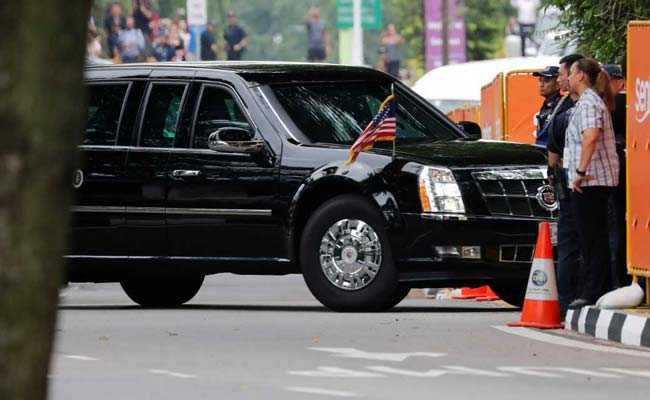 Meetings between staffs and representatives are going well and quickly....but in the end, that doesn't matter. We will all know soon whether or not a real deal, unlike those of the past, can happen!

Jun 12, 2018 05:23 (IST)
The meeting between Donald Trump and Kim Jong-Un at a luxury hotel in Singapore, scheduled for 9 a.m. local time -- 9 p.m. EDT Monday -- will mark the first face-to-face encounter between a U.S. president and a leader of North Korea. Its outcome could prove pivotal in determining whether the two nations pursue a lasting peace or a fresh military conflict.
Jun 12, 2018 05:21 (IST)

Donald Trump-Kim Jong Un Handshake To Open Summit As Outcome Hangs In Balance
President Donald Trump plans to shake hands and have lunch with North Korean leader Kim Jong Un, kicking off a historic summit on Tuesday between two adversaries that only last year had seemed at the brink of nuclear war."