Donald Trump's first UN speech: Today, he will outline his foreign policy priorities, from confronting North Korea over its nuclear and missile tests to deciding the fate of the Iran nuclear deal. 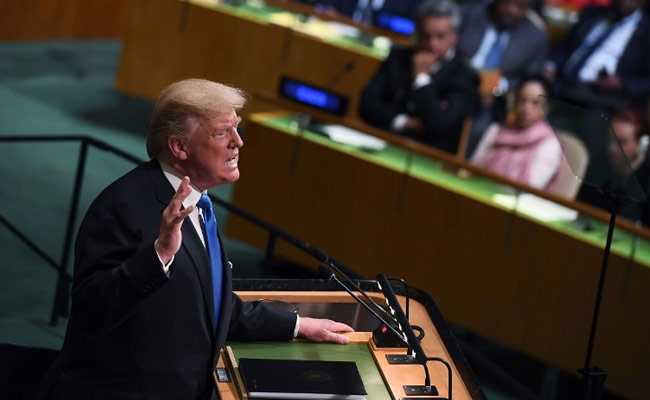 Donald Trump First UN Speech: He will outline his foreign policy priorities during the address.

US President Donald Trump is delivering his first address at the United Nations amid global anxiety over North Korea and Iran. Trump took the podium at the General Assembly just after Brazil's Michel Temer, presenting his message to the world as he pushes his nationalist "America First" agenda. At a first UN appearance on Monday, Trump vowed to push for reform at the world body that he once disparaged as a "club" where "people get together, talk and have a good time." Today, he will outline his foreign policy priorities, from confronting North Korea over its nuclear and missile tests to deciding the fate of the Iran nuclear deal.

Here are the live updates of Donald Trump's speech at UN:

In First UN Speech, Donald Trump Warns US May Have To 'Totally Destroy' North Korea
US President Donald Trump warned on Tuesday that the United States will be forced to "totally destroy" North Korea unless Pyongyang backs down from its nuclear standoff, mocking North Korean leader Kim Jong Un as a "rocket man" on a suicide mission.
Sep 19, 2017 20:11 (IST)
Meanwhile,

When the cameras pan to the audience, the result is hilarious. Many look agitated, others very perturbed. I saw a few dozing as well. #UNGA

- The United States and our allies are working together... to crush the loser terrorists.

- If [the U.S.] is forced to defend itself or its allies, we will have no choice but to totally destroy North Korea.

- On Syria, he says "No society can be safe if banned chemical weapons are allowed to spread

- For the cost of resettling 1 refugee in the United States, we can assist more than 10 in their home region

- The United Nations must reform if it is to be an effective partner in confronting threats to sovereignty.

- We will not lift sanctions on the Cuban government until it makes fundamental reforms.

- The Venezuelan people are starving and its country is collapsing.

- Wherever true socialism or communism has been adopted it has delivered anguish, devastation and failure.

Trump saying "I will always put America first as you should always put your countries first." gets him his first applause at UNGA

- We want harmony and friendship not conflict and strife.

- We must fulfill our sovereign duty to the people we faithfully represent.

- We must confront together, those who threaten us with chaos, turmoil and terror.

- I was elected not to take power but to give power to the American people where it belongs. 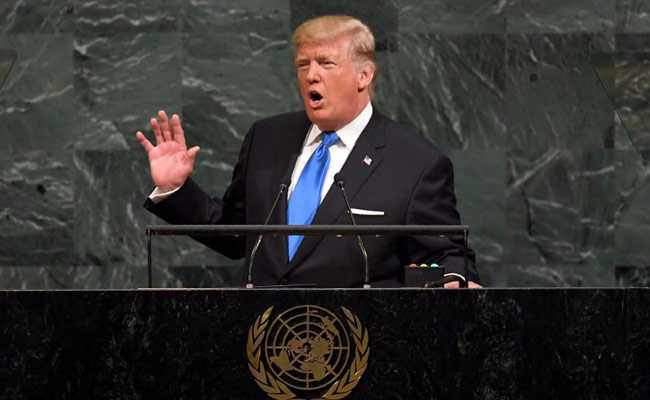 - It is a profound honor to stand here in my home city as a representative of the American people, to address the people of the world .

- Our military will soon be the strongest it has ever been.

- Terrorists and extremists have gathered strength and spread to every region of the planet.

- We meet at a time of both immense promise and great peril.

- Our success depends on a coalition of strong and independent nations that embrace their sovereignty.

- Strong sovereign nations allow individuals to flourish in the fullness of life intended by God.

- Generations of Americans have sacrificed to maintain... the promise of our country.

Sep 19, 2017 19:33 (IST)
JUST IN: Donald Trump arrives at the United Nations. He will deliver his maiden speech here shortly.
Sep 19, 2017 19:30 (IST)
UN chief talks about Rohingya crisis in his speech. He urged Myanmar to halt its military campaign against Rohingya Muslims, just hours after Aung San Suu Kyi failed to quell an international outcry in a much-anticipated address.

Addressing the opening of the UN General Assembly, Guterres said he "took note" of Suu Kyi's pledge to abide by the recommendations of a report by former UN chief Kofi Annan that has advocated citizenship for the Rohingyas.

"But let me be clear," Guterres said. "The authorities in Myanmar must end the military operations, and allow unhindered humanitarian access." 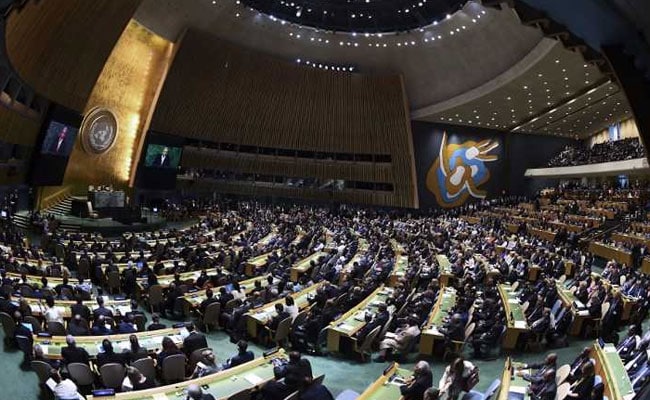 If you think you are the only one who excitedly click selfies at big events, then you are wrong. Take a look at this:

Chinese businessman Jack Ma is seen taking a selfie on his phone as UN Secretary-General Antonio Guterres addresses the 72nd session of the United Nations General Assembly at the UN headquarters in New York on September 19, 2017. (AFP photo) 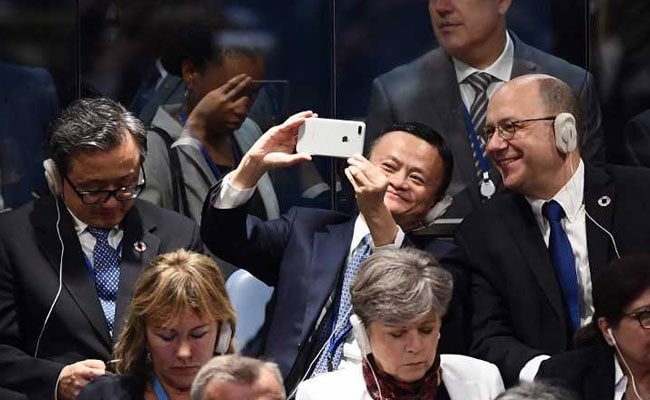 Quick glance down an empty (except for security) 1st Avenue in NYC. Police have closed street. Awaiting POTUS arrival at #UNGA2017pic.twitter.com/iX2bEkGnC9

"Millions of people live under a shadow of dread cast by the provocative nuclear and missile tests" carried out by Pyongyang. Guterres warned that rising tensions were increasing the chance of miscalculation and that "fiery talk can lead to fatal misunderstandings." He called for a political solution, saying "this is a time for statesmanship." "We must not sleepwalk our way into war," he said.

"We are a world in pieces. We need to be a world at peace" -- @antonioguterres#UNGA

.@antonioguterres mic drop by saying thank you in like 7 languages. This was an impressive debut speech.

Global anxieties about a nuclear war are at their highest level in decades, UN Secretary-General Antonio Guterres said Tuesday as he opened a gathering of world leaders dominated by the crisis with North Korea.

Addressing the high-level debate at the General Assembly, Guterres said millions of people are living in dread as a result of North Korea's provocative nuclear and missile tests. - For New Yorkers, the annual week-long UN General Assembly means traffic chaos as thousands of police are deployed and streets are shut down to make way for presidential motorcades.

- Hotel prices are also at a premium.

- Trump is staying at his Manhattan Trump Tower, which means that area is on lockdown. (Heavy traffic in the streets of New York the day before the opening of the 72nd session of the United Nations General Assembly. AFP photo)
Sep 19, 2017 18:22 (IST)
The Countdown Begins... 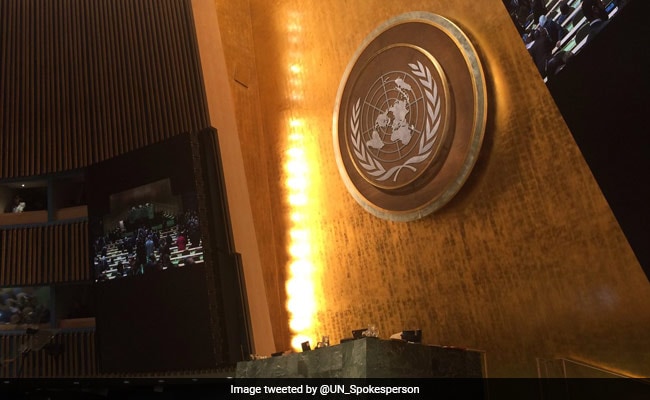 Big day at the United Nations - many good things, and some tricky ones, happening. We have a great team. Big speech at 10:00 A.M.

Sep 19, 2017 18:15 (IST)
The theme of the Debate of the 72nd session of the UN General Assembly is 'Focusing on People - Striving for Peace and a Decent Life for All on a Sustainable Planet'.

Taking a break from the marathon of speeches, world leaders will attend a luncheon hosted by Guterres at the United Nations.

- The starters include roasted chanterelle mushrooms, haricots and grilled stone fruit served on a bed of lettuce.

- The power lunch in a UN meeting hall will be crowned with a selection of chocolate mousses, fresh raspberries and passion fruit coulis.

- A French Sancerre wine will be served at the start, followed by a California Cabernet Sauvignon and -- in a nod to Guterres' native land -- there will be a 40-year-old porto from Portugal on offer at the end.
Sep 19, 2017 18:06 (IST)
UN General Assembly: Who's Attending?


US President Donald Trump will deliver his first speech at the United Nations today where he will take aim at "rogue regimes that threaten world stability and peace," singling out Pyongyang and Tehran during his 30-minute remarks, a White House top aide said. 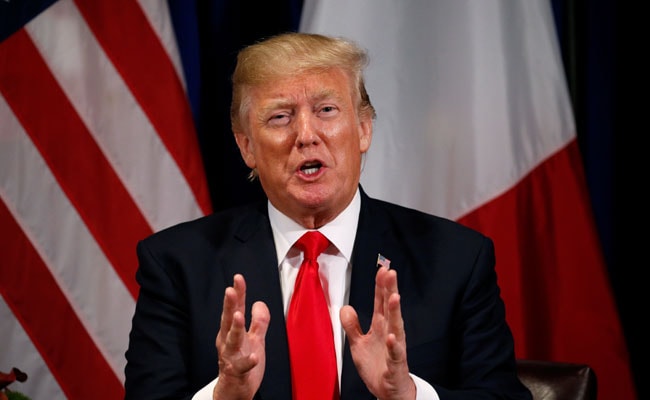 
French President Emmanuel Macron, seen as the face of a more confident post-Brexit Europe, will also be making his first address to the 193-nation assembly.His speech will likely offer a sharp contrast to Trump's world view. Donald Trump Bats For Reform In United Nations, Says US Will Help
US President Donald Trump, once a harsh critic of the United Nations Security Council, took a measured tone today and called for reforms in the body - a view India has taken for long. Addressing a meeting on UN reforms a day ahead of his address at the General Assembly, President Trump said he encouraged member states to strike out for change and not hold onto past systems that were not working.