Pelageya Poyarkova had contracted the virus from a fellow patient at another hospital where she had been receiving routine treatment. 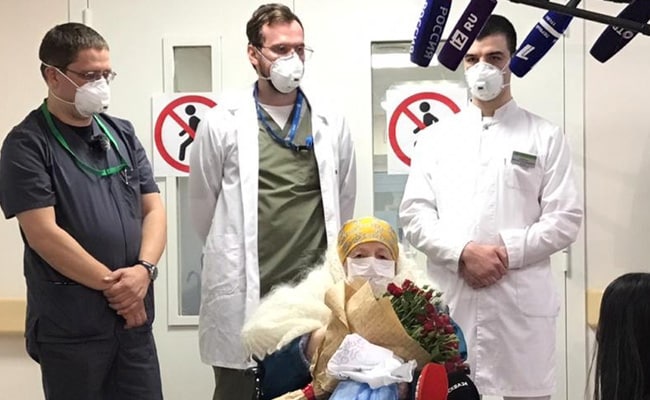 Russia celebrated a rare bit of good news on Wednesday as a 100-year-old woman left a Moscow hospital after fully recovering from the coronavirus.

In the country's first reported case of a survivor that old, the woman, Pelageya Poyarkova, was discharged on her 100th birthday, the Moscow clinic treating her said.

Russian television showed the elderly woman wearing a face mask and clutching a bouquet of red roses as she exited in a wheelchair, surrounded by doctors and journalists.

Poyarkova had contracted the virus from a fellow patient at another hospital where she had been receiving routine treatment.

After testing positive and developing several symptoms she was transferred to the Moscow Brain Centre, which normally specialises in stroke victims but has been repurposed to treat coronavirus patients.

The hospital said Poyarkova was the first Russian centenarian to have fully recovered from the virus.

"She turned out to be a tough old lady," the hospital's acting director Vsevolod Belousov said on Russian television.

She did not require intensive care and had standard treatment with blood-thinning drugs, he said.

Born in Moscow, the elderly woman now lives with her daughter and son-in-law. Her husband was killed in World War II, leaving her to care for her young child alone, the hospital said.

Russia has now reported 242,271 cases of coronavirus and is the world's second worst-affected country after the United States in terms of number of infections.

The coronavirus is especially dangerous for older people and those with chronic conditions.