Caught On Camera: Pickup Truck Slams Into Motorbike After Being Hit By SUV

The horrifying multi-vehicle crash took place on November 14 and was a fatal incident for the driver of the stolen black car. 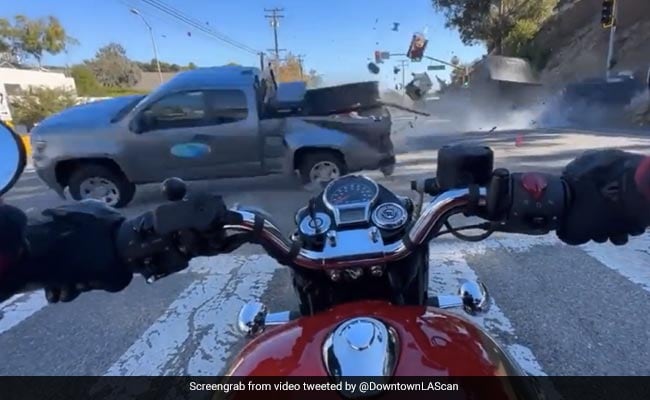 The video has accumulated more than 6.7 million views.

A shocking video shared on Twitter has captured what a motorcyclist at a traffic light in Malibu, United States, saw seconds before a massive pick-up truck flew into him after being slammed into by a black SUV. The horrifying multi-vehicle crash took place on November 14 and was a fatal incident for the driver of the stolen black car, the New York Post reported.

In the clip, the motorcyclist was seen calmly waiting to make a left turn off the busy Pacific Coast Highway in southern California. Traffic was moving at pace, but despite the many cars on the road, the black SUV zipped directly onto the highway in an attempt to cross in between passing cars.

At this moment, the SUV clipped a large grey pickup truck and in a flash, the spinning truck flew directly into the motorcyclist while debris and materials from the truck hurled out of the bed and onto the open road.

Here's video from a motorcyclist of that fatal crash that happened in Malibu on Nov 14. pic.twitter.com/Mf6bUNGZYL

As per the Post, the motorcyclist miraculously survived the harrowing ordeal and was taken to the hospital. The pickup truck driver's condition is still unclear, but not believed to be fatal. The driver of the stolen black SUV, however, did not survive the impact.

Speaking to ABC 7, Los Angeles County Police spokesperson said that the unnamed driver struck about half-a-dozen warning markers in the centre median after coming down an incline at high speed. After slamming into the pickup truck, the black car slammed into a 30-foot-high embankment and landed upside down.

Viral Video | Tourists Stop Jeep To Get Closer Look At Tiger. This Happens Next

Even though bystanders tried to rescue the driver from the mangled car, the cops said that it caught fire and exploded before the driver could escape. The driver was reportedly airlifted to the hospital but later died.

Meanwhile, the video of the horrifying incident was shared on Twitter on Sunday and since then it has accumulated more than 6.7 million views. In the comment section while some called the accident "brutal," others called it "heartbreaking".