Caught On Camera: Bus Driver In US Gets Into A Fight With 12-Year-Old Student

The bus driver has been suspended for the time being and may face termination, the Detroit Public Schools Community District (DPSCD) confirmed. 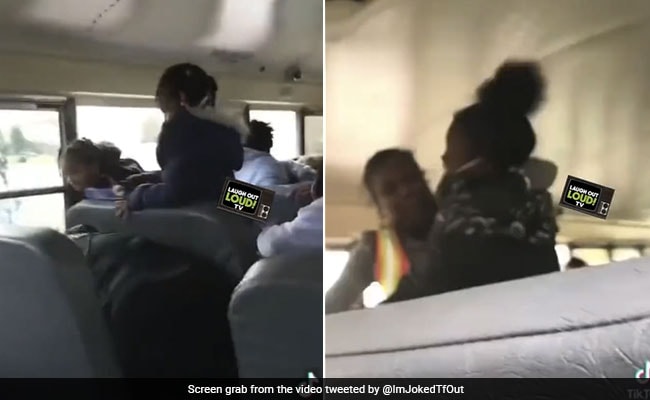 The incident is currently under police investigation.

A video showing a school bus driver getting into a physical altercation with a 7th-grade student is going viral on social media. The shocking video, shared on Twitter, was recorded on Tuesday on a bus in Detroit, United States.

The short clip shows the bus driver attempting to push the student away from her who is throwing punches. The two are seen thrashing each other violently before falling onto a bus seat.

"Detroit school bus driver suspended after fight with a student," the caption of the Twitter post read.

According to Fox2, the driver has been suspended for the time being and may face termination. He said the student had refused to sit down and swung at him first.

Speaking to the outlet, the student's family, on the other hand, said that the young girl was waving at her brother outside of the window when the bus driver "tapped on the shoulder and told her 'sit her a** down'". The 12-year-old also claimed that the driver swung at her first.

On Twitter, the video has garnered more than 22,000 views. In the comment section, while some users are seen defending of the bus driver, others express sympathy for the schoolchildren involved.

"The student was outta school line," wrote one user. "I didn't see (the driver) swing. I just saw her trying to stop (herself) from being hit. She couldn't be punished because of that wild child (whose) parents are clearly not teaching their child to respect adults," added another.

A third commented, "Hated to hear how scared that kid was on the bus and as a kid I would have been too because you see the driver fighting a kid." "Sure the 'they hit me first' will hold up in court," added fourth.

Meanwhile, in a statement, the Detroit Public Schools Community District (DPSCD) confirmed the incident and said that the fight occurred on a bus contracted by Trinity Transportation. DPSCD also informed that the incident is under police investigation.