British Parliament Votes To Delay Brexit Beyond This Month

Since being elected, Theresa May has insisted that "Brexit means Brexit," that she would negotiate a good deal, and that Britain would leave on March 29. 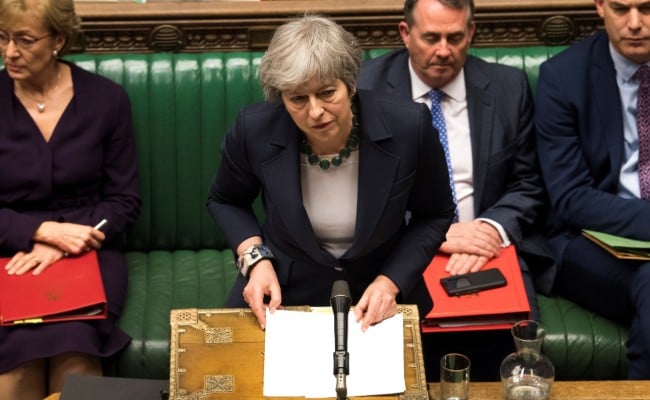 British lawmakers voted Thursday to seek to delay Brexit - maybe for weeks, maybe for months - after Prime Minister Theresa May's plans for leaving the European Union have been repeatedly rejected by a raucous Parliament trying to wrest control from her.

Since being elected, May has insisted that "Brexit means Brexit," that she would negotiate a good deal, and that Britain would leave on March 29. The March date was a deadline the prime minister herself triggered when she - alongside the British Parliament - initiated Article 50 in the EU treaty two years ago.

Now Britain almost certainly will not leave the European Union in two weeks - unless EU leaders reject its request and it crashes out with no deal. The vote to delay Brexit was 412 to 202.

Also on Thursday, lawmakers voted against holding a second Brexit referendum, a complete do-over that could see the results of the historic June 2016 plebiscite overturned.

While many members of Parliament may ultimately back a second referendum - a highly contentious prospect, marketed as a "People's Vote" - even supporters of the move withheld support on Thursday, hoping instead to push the idea in tumultuous days to come.

May is offering lawmakers a stark choice. Either support her now twice rejected Brexit deal in a third "meaningful vote" next week - dubbed MV3 - or face the prospect of a very long Brexit delay, which could stretch far into the future, perhaps for a year or more.

Christopher Chope, a hard-line Brexiteer and fellow member of May's Conservative Party, confessed he felt May's cold steel. "Instead of accepting verdict of House, she is stubbornly continuing to assert that her deal is a good deal. And now she is holding a pistol to our heads by threatening that we will lose Brexit altogether," he told the House of Commons on Thursday.

May said that if the lawmakers back a Brexit deal by Wednesday - the day before a European summit - she will ask EU leaders for a "one-off extension" ending on June 30. Those three months would be necessary to pass legislation in Britain and on the continent and to provide for an "orderly Brexit."

If the lawmakers reject May on her third attempt to win approval for her half-in, half-out compromise plan for Brexit, then the prime minister said she will ask EU leaders for a longer delay - the government's motion didn't say how long.

Staying in beyond June would likely require Britain, as one of the 28 EU member states, to hold European Parliament elections in May 2019. This would essentially keep Britain in the economic and political union a good long while.

President Donald Trump weighed into the debate on Thursday, offering May a hand via a morning tweet: "My Administration looks forward to negotiating a large scale Trade Deal with the United Kingdom. The potential is unlimited!"

But in a later meeting with the Irish Prime Minister Leo Varadkar at the White House, Trump was critical of May's leadership.

"I'm surprised at how badly it's all gone from the standpoint of a negotiation," Trump said. "I gave the prime minister my ideas on how to negotiate it, and I think you would have been successful. She didn't listen to that and that's fine - she's got to do what she's got to do. I think it could have been negotiated in a different manner, frankly. I hate to see everything being ripped apart now."

European leaders will have to decide what to do with Britain when they gather for a two-day conclave in Brussels next Thursday. They are divided over how much rope to give.

The Italian Foreign Minister Enzo Moavero Milanesi compared the suspense of Brexit to a "Hitchcock film."

Some countries, especially France, feel that if a no-deal departure is going to happen anyway at the end of an extension, it would be preferable to face the pain sooner. President Emmanuel Macron would also prefer to take Brexit off the table as an issue in May elections for European Parliament, since euroskeptic far-right groups in France have been energized by the Brexit turmoil.

Others think a long extension would be best, so voters don't blame mainstream leaders for whatever economic turmoil arises. Or they want to preserve good relations with a country that will continue to be an important trading and security partner even after its departure.

Donald Tusk, president of the European Council, tweeted Thursday that he would urge EU leaders to support a "long extension" if Britain needed to "rethink its Brexit strategy and build consensus around it."

"Once they sort themselves out, I'm pretty sure the 27 will still be united on the next steps forward," European Commission Vice President Frans Timmermans told Sky News. "But many member states are saying, yes, you're talking about an extension, but to do what?"

"I think we should suggest to the Europeans a good, long delay," Clarke said. "Go back to square one and work out . . . over a proper time, the final relationship."

Passions are high - as hard-line Brexiteers fear May's strategy will either force them to accept a deal they don't like or they will lose their beloved Brexit.

A headline in the Telegraph newspaper read: "Britain's Remainer elites have declared war on democracy itself."

Nigel Farage, the frontman for Brexit and former leader of the U.K. Independence Party, warned, "Brexit's betrayal is one of the most shameful chapters in British history."

The vote against the second referendum was decisive: 85 to 335. The opposition Labour party asked its members to abstain and urged angry members pushing for a second referendum to be patient. The Labour leader on Brexit, Keir Starmer, told angry backbenchers, "It is obvious that we are supportive of the principle. It's a question of timing."

Vince Cable, the leader of the pro-referendum Liberal Democrats, said there was still hope for a do-over: "We've seen Theresa May's proposals coming back again and again. We'll come back again and again." Cable said the key was Labour Party leader Jeremy Corbyn, who until now has been only lukewarm about a second referendum.

Speaking after the vote, Corbyn said, "I also reiterate our support for a public vote." He was jeered, in part, because members did not believe him.

Lawmakers also voted against an amendment that would have seen Parliament hold "indicative votes" on a range of Brexit options to help determine whether there is a majority for anything. The amendment reflected an effort by Parliament to take control of Brexit away from May. The vote was close: 312 to 314.

Members of May's party have been brazen in saying that a compromise deal could be crafted - but they beg the prime minister to drop her plan.

"There is a majority in this house for a Brexit deal. It's just not the prime minister's deal," Conservative lawmaker George Freeman told the BBC. "We have got to find a way to find that cross-party deal."

Arlene Foster, the leader of the Democratic Unionist Party and who is currently in Washington, told the BBC they were in talks with May's government. Many think that if the DUP were to fall in behind the government, then other hard-line Brexiteers would follow.

"When you come to the end of a negotiation, that's when you really start to see the whites of people's eyes," said Foster, "and you get down to the point where you make a deal."

(This story has not been edited by NDTV staff and is auto-generated from a syndicated feed.)
Comments
Theresa MayBrexit deal