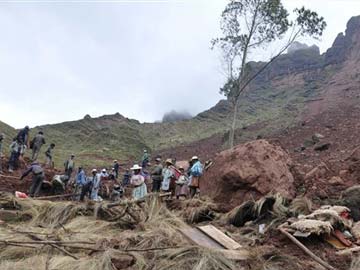 Farmers dig through the mud in search of survivors and recovery of bodies after a mudslide buried a small settlement in Chullpa Kasa, Bolivia.

Jimena Alegre, an official for the Morochota municipality, told The Associated Press by telephone that the mudslide occurred on Saturday night in the Quechua community of Chuypakasa and buried the homes of 15 families.

Rescue squads were digging through the site in hopes of finding more survivors. The first responders were from Cochabamba, which is about 220 kilometers (135 miles) east of the capital of La Paz.

Promoted
Listen to the latest songs, only on JioSaavn.com
Heavy rains have been falling across most of Bolivia since November and an estimated 46,800 families have been affected.