Blog from New York: The new storm brings snow, lots of it 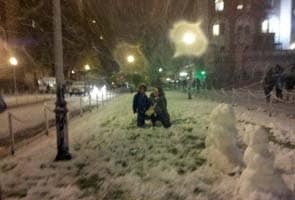 "Make sure your windows are shut." Another mail from the emergency management system of my college, the Columbia School of Journalism, warning us about the new storm hitting NY.

This doesn't feel like New York any more. A week into super storm, Sandy and we are is still dealing with the aftermath, here comes the howling wind. It's bitter cold, and four inches of snow is no fun! The most beautiful season, Fall, has been snowed under.

This was a season meant to be of colors, now it's a white blanket. The morning began with icy rain, then came the snow, and it won't stop.

For many of my classmates from Brooklyn and New Jersey it can't get worse.

I figured power was restored at a classmate's home only yesterday, when I saw her message on Facebook - 'it's been a week living in the 19th century.'

I hope this storm isn't going to be as destructive. But with winds at 60mph, it's still bad for buildings already weakened by a powerful storm last week. There have been evacuations in News Jersey and a few other areas.

Another classmate was traveling three hours to get to school by bus because after Superstorm Sandy, the subway came to a grinding halt.

The gas stations have lines running 20 blocks for petrol.

Despite all the hardships of today,  people are trying to make the most of it.   I saw a mother help her son with a huge snowman.