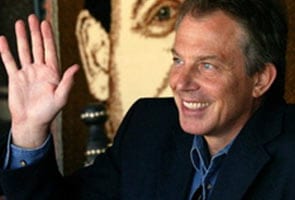 The revelation emerged in a Vogue magazine interview with Murdoch's wife Wendi Deng, which also contains claims that Blair was present when Murdoch and Deng's two daughters were baptised beside the River Jordan in March last year.

A spokesman for Blair's London office and a spokeswoman for Murdoch's US-based News Corporation both refused to comment on the story in Vogue's October UK edition, which is out on Thursday.

News of the link between former Labour premier Blair and Australian-born Murdoch comes two months after the tycoon was forced to close down his News of the World tabloid amid a scandal over phone-hacking.

The Vogue article, extracts of which were published in Britain's Daily Telegraph newspaper on Monday, says Blair attended the ceremony "garbed in white" and describes him as one of Wendi Deng's "closest friends".

Hollywood stars Nicole Kidman and Hugh Jackman were named publicly as godparents to Murdoch's young daughters at the time of the ceremony on the banks of the River Jordan, but Blair did not feature in photographs that were released.

The phone-hacking scandal dragged in current Conservative Prime Minister David Cameron when his former media chief Andy Coulson, an ex-News of the World editor, was arrested in July on suspicion of hacking and bribing police.

But it raised wider questions about the British establishment's cosy links with Murdoch, especially as Labour, who are now in opposition, made huge efforts to win over the elderly mogul's stable of newspapers.

Wendi made headlines on July 19 when she leapt to the defence of her husband after he was attacked with a "foam pie" during a parliamentary hearing into the News of the World scandal.

In the Vogue interview, which was conducted on the eve of the hearing, she defended her husband, saying: "Of course, as Rupert's wife, I think it's unfair on him to be going through this.

"I worry about him being alone. He has no PR people advising him. He tells me not to come but I'm flying to London for the hearing. I want to be with him."

She added that she had not slept for weeks due to stress.

The tycoon's wife also discussed her poverty-stricken upbringing in China in a "little funny town called Xuzhou, in the countryside, very poor.... I had never even been in a supermarket before coming to America."

Promoted
Listen to the latest songs, only on JioSaavn.com
She said her family did not own a fridge until she was 15 and "my parents wouldn't let me open the refrigerator door because they worried I would damage the door by opening it too many times".

A spokeswoman for Vogue UK confirmed that all the information and extracts published in the Daily Telegraph were accurate.