Barack Obama thanks supporters, says 'This happened because of you' 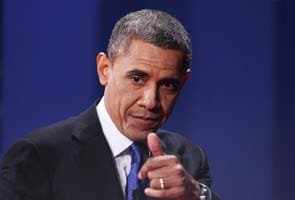 Washington: Barack Obama has been re-elected President of the United States of America. He claimed victory with posts on his Twitter and Facebook pages, tweeting, "This happened because of you. Thank you."

And then a minute apart, he tweeted, all from his official account, "We're all in this together. That's how we campaigned, and that's who we are. Thank you. -bo", and "Four more years" with a picture of him hugging wife Michelle. The initials "bo" marked these as personal messages; his first tweet was quickly "retweeted" 166,000 times. The second, 104,600 times and the third, 277,600 times.

This happened because of you. Thank you.

This is only the second time in several decades that a Democrat has won a second term in the White House. Mr Obama said in a message on his website that "this wasn't fate, and it wasn't an accident. You made this happen."

Thanking his supporters profusely, Mr Obama also said, "You organized yourselves block by block. You took ownership of this campaign five and ten dollars at a time. And when it wasn't easy, you pressed forward. I will spend the rest of my presidency honoring your support, and doing what I can to finish what we started."

He then added that "Today is the clearest proof yet that, against the odds, ordinary Americans can overcome powerful interests." (READ FULL MESSAGE)

Crowds went wild across the country as all major US television networks projected that Obama would win at least 274 electoral votes, enough to defeat his Republican challenger Mitt Romney.

Election day in the United States became the most tweeted about event in US political history, with enthusiastic netizens firing off 20 million poll-related tweets, the social network said. The number far surpassed the 10.3 million tweets sent during the first presidential debate last month -- an event the popular social network had at the time billed a record in US political history.