President Joe Biden revealed in a speech to the US Naval Academys graduating class that Chinese President Xi Jinping warned him that democracies are on the decline and that "autocracies will run the world". 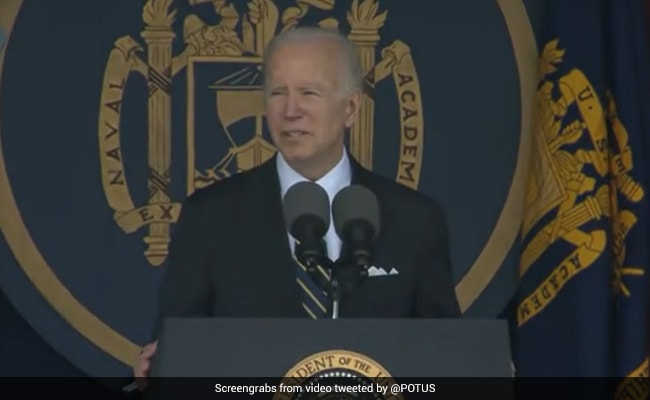 President Joe Biden revealed in a speech to the US Naval Academy's graduating class that Chinese President Xi Jinping warned him that democracies are on the decline and that “autocracies will run the world”.

Joe Biden who recently travelled to Asia to meet with the leaders of the Quad (Heads of state of India, Japan, Australia and USA) talked about a phone call he had with Xi Jinping the day he got elected to become the 46th President of the United States of America. Talking about the phone conversation, the US President said, "We're living through a global struggle between autocracies and democracies.  And I will note — and my co — I've met more with Xi Jinping than any other world leader has.  When he called me to congratulate me on election night, he said to me what he said many times before.  He said 'Democracies cannot be sustained in the 21st century.  Autocracies will run the world'. Why? 'Things are changing so rapidly.  Democracies require a consensus, and it takes time, and you don't have the time'. He's wrong.”

Tune in as I address the United States Naval Academy's Class of 2022 graduation and commissioning ceremony. https://t.co/tp5scdwgNh

He went on to say, “Each of you, as you go out into the world, will not only be a proud member of the armed forces of the United States of America, you'll be representatives and defenders of our democracy.  It sounds corny but, literally, our democracy. That's why you swear an oath not to me as your Commander-in-Chief or to any political leader, but to the Constitution.”

The relationship between China and the United States has always been turbulent, with their differing government philosophies at the centre of those differences.

The most recent tensions between the countries has been around the issue of Taiwan which China believes to be a part of the its nation but has a separate government allied with the United States. During his meeting with Quad leaders, Biden reaffirmed Washington's commitment to ensuring the security of the Taiwan Strait and preventing any change in the status quo unilaterally.

When asked whether the US is ready to get involved militarily to defend Taiwan, he replied in the affirmative, adding that this is the commitment that the US has taken on.

China in response said that the US was “playing with fire”.