Australia's outbreak has spread to New Zealand, which has entered a strict nationwide lockdown and recorded at least 20 infections. 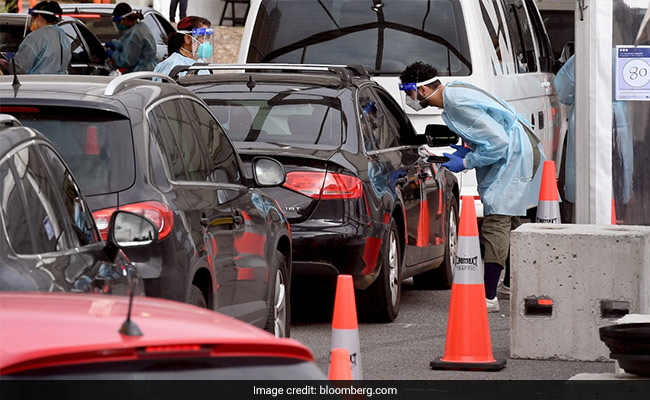 Less than 22% of Australians are fully inoculated, according to Bloombergs Vaccine Tracker.

Australia has suffered its worst day since the start of the Covid-19 pandemic, with total daily cases surpassing the previous record posted more than a year ago as a delta variant outbreak spreads as far as New Zealand.

New South Wales, Victoria and Australian Capital Territory recorded a combined 754 cases in their communities on Thursday, surpassing the nation's previous high of 725 recorded in early August 2020, when Melbourne was in the midst of a lockdown that lasted for three months.

Authorities are now finding that lockdown strategies that had previously worked to eliminate community transmissions are struggling to contain the spread of the highly-contagious strain, especially as people grow increasingly weary of the stay-home restrictions.

"Everyone will have to learn to live with delta," Berejiklian said, signaling that her government had abandoned attempts to eliminate the virus. "In New South Wales, we are learning that earlier than" in other states, she said. Ramping up vaccination rates was vital in order to start removing some lockdown restrictions, she added. 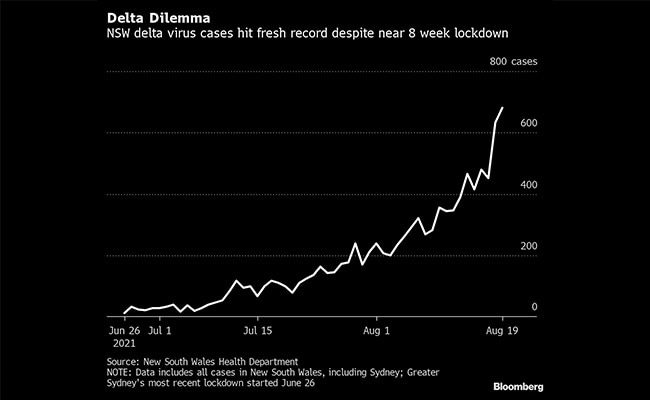 Australia's outbreak has spread to New Zealand, which has entered a strict nationwide lockdown and recorded at least 20 infections. The first community case in New Zealand since February was detected earlier this week, and genome testing has showed a clear link to the delta surge in New South Wales.

Sydney's outbreak is also increasingly spreading into other areas of Australia, forcing more than half of the country's 26 million people into lockdown. That's creating an unprecedented threat to Indigenous communities hundreds of miles from Australia's most populous city, including in western New South Wales, where more than 150 infections have been detected.

The rapid rise in infections underscores how both nations' so-called “Covid Zero” strategy -- which has seen them rely on restricted international borders and rigorous testing to eliminate community transmission -- is under increasing strain.

The case surge has injected a sense of urgency into Australia's previously slow vaccine rollout, which has seen Prime Minister Scott Morrison criticized by health experts and political rivals for failing to quickly secure enough shots from a wide range of drugmakers.

As recently as March -- when Australia was generally free of the virus -- Morrison declared that the inoculation rollout wasn't a "race." But the delta variant has flipped the script, with health authorities now trying to get as many people vaccinated as quickly as possible despite remaining hampered by supply restraints. According to Bloomberg's Vaccine Tracker, while less than 22% of Australians are fully inoculated, close to 40% have now received at least one dose. 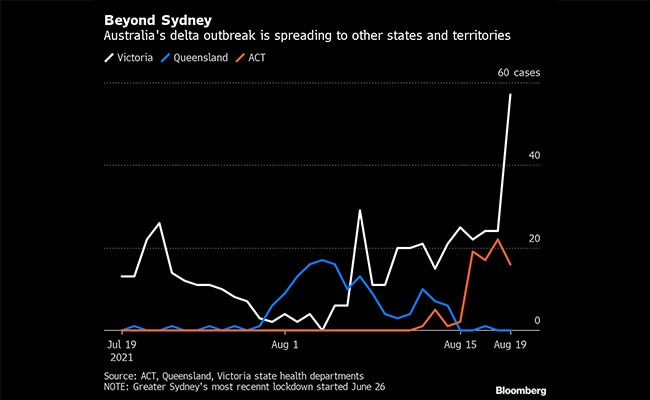 Other states and territories have responded to the coronavirus crisis in southeastern Australia by implementing hard borders to try to keep delta at bay. After a request from Queensland state authorities, defense force soldiers will start patrolling its border with New South Wales to enforce non-essential travel restrictions.

In a bright spot, the tropical northern city of Darwin will exit its three-day lockdown on Thursday after managing to control a delta cluster.

Despite the mounting economic and emotional toll the pandemic and lockdowns are having on Australians, the nation's top banks say the economy is well positioned to rebound once prolonged stay-at-home orders in Sydney and regional lockdowns lift, with households and firms stronger than at the start of the pandemic.

"The emotional toll is higher this time as there is a lot of anguish around how we get out of it," said Andrew Hinchcliff, group executive of institutional banking and markets at Commonwealth Bank of Australia. "But the Australian economy is so well positioned, it will come out of this on a relative basis better than most."