The regional jet took off from Sheremetyevo for the northwestern city of Murmansk shortly after 6 p.m. and turned around minutes later. Footage showed the plane bouncing along the runway as it landed. 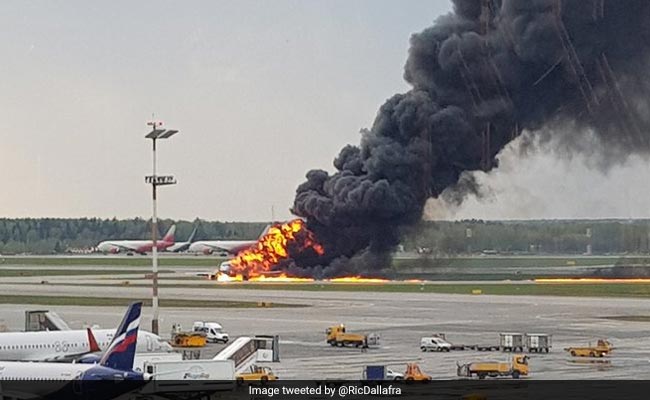 Forty-one people were killed Sunday after a Russian passenger jet making an emergency landing in Moscow touched down and burst into flames.

The Russian-made Sukhoi Superjet, carrying 78 people, careened across the runway at Moscow's Sheremetyevo airport with thick, black smoke pouring out from behind, footage from the scene showed. The aircraft, operated by Aeroflot, skidded to a stop perpendicular to the runway. Passengers scrambled out of the burning hulk on emergency slides, some travelers carrying children.

The Russian Investigative Committee said 41 people died, including one crew member. It wasn't immediately clear what caused the plane to make an emergency landing and catch fire. Officials launched a criminal investigation.

The regional jet took off from Sheremetyevo for the northwestern city of Murmansk shortly after 6 p.m. and turned around minutes later. Footage showed the plane bouncing along the runway as it landed.

Aeroflot said that the plane was forced to return to the airport by a "technical reason" and that its engines caught fire as it touched down.

"I survived thanks to the stewardesses," passenger Dmitry Khlebushkin told Russian news reporters at the airport. He said the crew rushed to evacuate passengers as flames engulfed the fuselage.

Russia has long struggled with poor air-travel safety, and crashes are relatively common. Three hundred and twenty-six people died in accidents on Russian-scheduled commercial flights between 2008 and 2017, according to the International Civil Aviation Organization. Sixty-one people died on U.S. flights during the same period.

Recent years have seen a surge in the number of Russian air travelers and substantial investment by carriers in new aircraft. Poorly trained crews and alcohol consumption by airport staffers have been blamed for fatal occurrences in the past.

Russia, the largest country by land mass in the world, offers the potential for soaring profits for carriers able to break into the market. But standards and regulations are still somewhat slipshod, and several new Russian airlines have gone bankrupt in the past decade.

Russian jet crashes have not been limited to commercial carriers. A Defense Ministry plane heading for a Russian air base in Syria in 2016 plunged into the Black Sea, killing all 92 people on board, including most of the country's Red Army Choir.

Aeroflot, whose logo is still a hammer and sickle, was once synonymous with Soviet-era incompetence. But the company, part of the SkyTeam alliance, has become a darling of investors in recent years, and its fleet is one of the newest in the world.

Most of Aeroflot's 255 passenger aircraft are from Boeing and Airbus. Russian-made Sukhoi jets make up a fifth of the fleet. The Sukhoi Superjet has represented the greatest hope for growth for Russia's long-moribund commercial airplane-making industry, but it has struggled to attract foreign buyers.

The plane that burst into flames Sunday was a Sukhoi SSJ-100 regional jet. Air traffic logs show that that Flight SU1492 took off from Sheremetyevo, Russia's busiest airport, at 6:03 p.m. local time. Eight minutes later, the flight's squawk code changed to 7600, indicating a radio failure. At 6:25 p.m., the squawk changed to 7700 - an emergency.