Until now, climate models have predicted a slow and steady increase of Arctic temperatures, but a new study shows the warming is occurring at a more rapid pace. 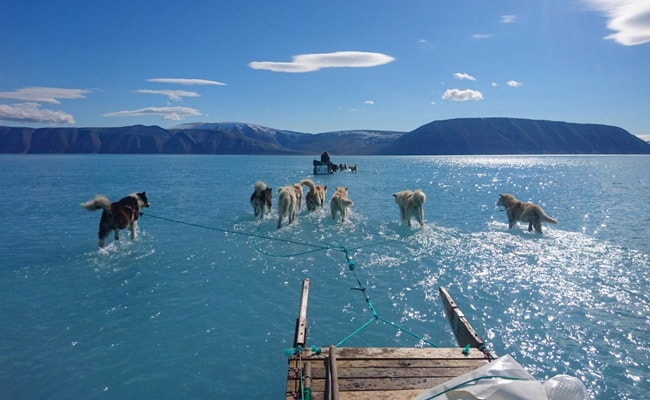 The Arctic sea ice is melting faster than climate models had predicted, researchers at the University of Copenhagen warned on Tuesday.

Until now, climate models have predicted a slow and steady increase of Arctic temperatures, but a new study shows the warming is occurring at a more rapid pace.

"We have been clearly underestimating the rate of temperature increases in the atmosphere nearest to the sea level, which has ultimately caused sea ice to disappear faster than we had anticipated," said Jens Hesselbjerg Christensen, a University of Copenhagen professor and one of the researchers involved in the study, in a statement.

Their findings, published in the journal Nature at the end of July, showed the unusually high temperatures currently being seen in the Arctic Ocean have only been observed during the previous ice age.

Ice core analyses have revealed that temperatures over the Greenland ice sheet increased several times during that time, between 10 to 12 degrees, over a period of 40 to 100 years.

"Changes are occurring so rapidly during the summer months that sea ice is likely to disappear faster than most climate models have ever predicted," Hesselbjerg Christensen said.

In June 2019, a photograph of the early ice melt in northwestern Greenland made headlines around the world.

It showed sled dogs struggling through five or six centimetres of meltwater pooling on top of the ice. With a snowless mountain in the background, the dogs appear to be walking on water.

A recent study from Britain's University of Lincoln concluded that Greenland's ice melt alone is expected to contribute 10-12 centimetres to the world's rising sea levels by 2100.

Another group of researchers recently concluded that the melting of Greenland's ice cap has gone so far that it is now irreversible, with snowfall no longer able to compensate for the loss of ice even if global warming were to end today.