Amid Outrage Over Sex Abuse By Priests, Pope To Hold Mass In Dublin

Pope Francis said inaction over "these repellent crimes has rightly given rise to outrage, and remains a source of pain and shame for the Catholic community". 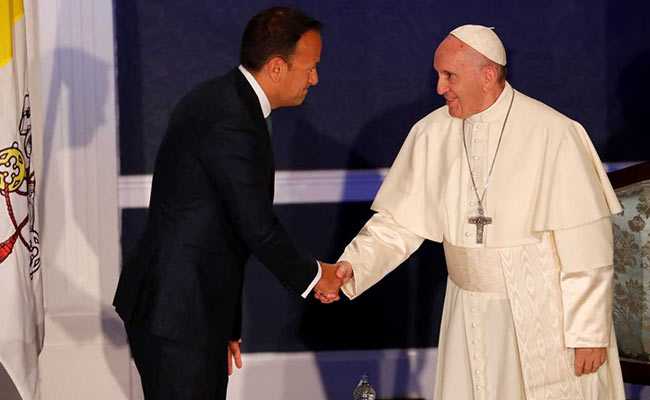 Pope Francis will visit an Irish shrine and hold a giant mass in Dublin on Sunday as he wraps up a visit overshadowed by abuse scandals and cover-ups in the Catholic Church.

Francis is due to speak in front of some 500,000 faithful in Phoenix Park, as abuse victims and their supporters gather in a "Stand for Truth" rally in the city centre to demand justice.

Francis said inaction over "these repellent crimes has rightly given rise to outrage, and remains a source of pain and shame for the Catholic community. I myself share those sentiments".

Francis on Saturday also met eight victims, including a woman assaulted by a priest when she was in hospital aged 13 and a man who was illegally adopted because his mother was unmarried.

In a strongly-worded speech at the start of the pope's visit, Varadkar said the abuses in Ireland were "stains" on the Catholic Church, the state and Irish society as a whole.

"There is much to be done to bring about justice and truth and healing for victims and survivors. Holy Father, I ask that you use your office and influence to ensure that this is done here in Ireland and across the world," he said.

"Far too often there was judgement, severity and cruelty... people kept in dark corners, behind closed doors, cries for help that went unheard," he added.

He demanded of Francis "that from words flow actions".

Paul Jude Redmond, who was illegally adopted from a Church-run "Mother and Baby Home" and met the pope on Saturday, said the pontiff appeared "genuinely shocked" by the stories of abuse.

But at a news conference in Dublin on Saturday by the group Ending Clergy Abuse (ECA), victim Mark Vincent Healey said the pope's speech in Dublin was a "total missed opportunity".

This is the first papal visit to Ireland since John Paul II spoke in front of 1.5 million people during a visit in 1979.

The Church's role has been badly dented by abuse scandals and the Irish have shed traditional mores, voting earlier this year to legalise abortion after approving same-sex marriage in 2015.

The pontiff is in Ireland to close the 2018 World Meeting of Families (WMOF) -- a global Catholic gathering that addressed issues including the treatment of gay people in the Church.

But street vendors in Dublin selling papal souvenirs have complained of sluggish trade, as protesters rubbed shoulders with devout Catholics in the streets of the city.

In Tuam, a town in western Ireland, a silent vigil was planned for Sunday in solidarity with victims of "mother and baby" homes -- institutions accused of being punishment hostels for unwed pregnant women.

"Significant quantities" of baby remains found in makeshift graves at the site of one such home in Tuam last year shocked the country.

The abuse scandals in Ireland are part of a worldwide crisis for the Vatican.

A devastating report earlier this month accused more than 300 priests in the US state of Pennsylvania of abusing more than 1,000 children since the 1950s.

The pope wrote a letter to the world's 1.3 billion Catholics vowing to prevent future "atrocities" but also conceding that no efforts "to repair the harm done will ever be sufficient".

(Except for the headline, this story has not been edited by NDTV staff and is published from a syndicated feed.)
Comments
Pope FrancisPope Francis in Ireland