After 74 Years, Bones From Pearl Harbor Tomb Ship May be Identified 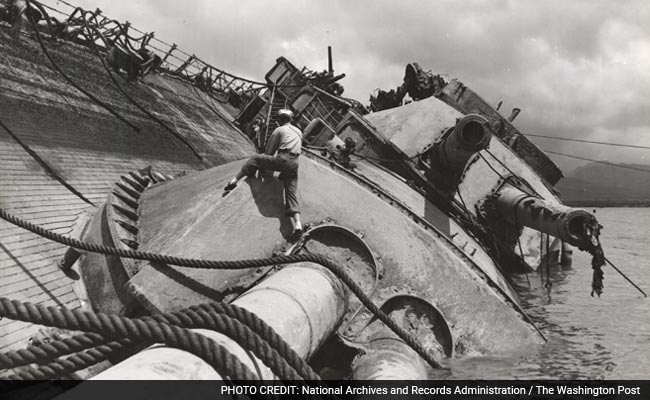 The USS Oklahoma was sunk by several bombs and torpedoes during the Japanese attack on Pearl Harbor, Hawaii. A total of 429 crew died when the ship capsized. (National Archives and Records Administration / The Washington Post)

Offutt Air Force Base, Nebraska: Inside an old aircraft factory here, behind the glass windows of a pristine laboratory, the lost crew of the USS Oklahoma rests on special tables covered in black foam.

Their bones are brown with age after 50 years in the ground and, before that, months entombed in their sunken battleship beneath the oily waters of Pearl Harbor.

Legs, arms, ribs, vertebrae. Some have blue tags tied with string, identifying the type of bone. Some have beige tags, indicating that experts also want samples for DNA testing.

They are the unidentified remains of hundreds of sailors and Marines who perished 74 years ago Monday, when Japan launched a surprise air attack on Hawaii and plunged the United States into World War II. 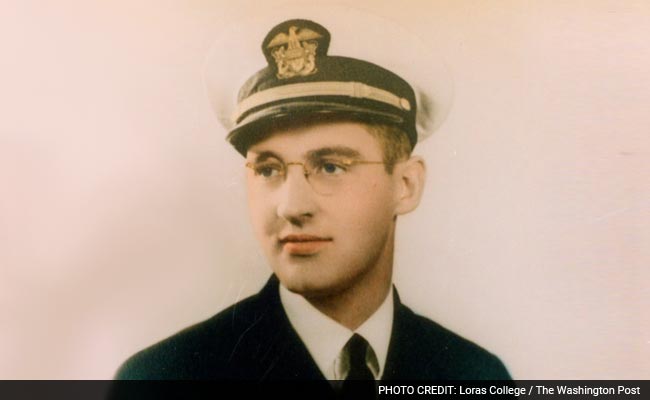 Now, seven decades later, the government is trying to put names to the old salts and teenage sailors who died when their ship was sunk by enemy torpedoes Sunday morning, Dec. 7, 1941.

Over the past six months, with a fresh mandate from the Defense Department, the bones were exhumed from a cemetery in Hawaii and most were brought to a new lab here, where scientists have begun the task.

The goal is to send the men home.

"It's important for the families," said Carrie Brown, an anthropologist with the newly created Defense POW/MIA Accounting Agency (DPAA), which is doing the work.

"For a lot of people, it's an event that happened in their family history," she said, and that story "has been carried down sometimes (for) generations."

"A lot of people say, 'World War II. Who's even alive? Who even remembers?'" she said. "We need to get these guys home. They've been not home for too long." 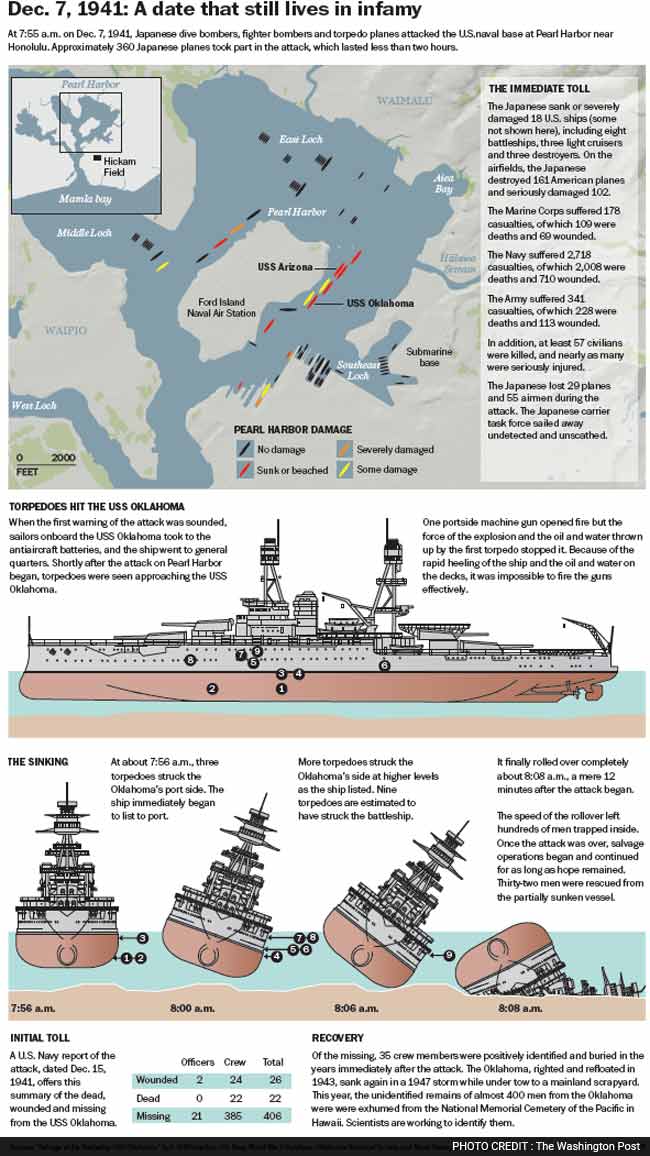 At 7:45 a.m., on Dec. 7, the USS Oklahoma's 24-member band, like the bands of other ships in the harbor that day, had assembled on deck for the morning colors ceremony.

As they prepared to play, another band member saw strange planes approaching. Then he heard explosions, and then over the PA system the alarm: "Air Raid!" according to a history of the ship by author Jeff Phister

Some musicians ran for cover and survived.

Mason, Booe, Lescault and nine other band members were killed, according to Phister and records in the National Archives. Their bodies were never identified.

The Oklahoma's loss of life at Pearl Harbor - a total of 429 sailors and Marines - was second only to the 1,100 lost on the USS Arizona, whose wreck remains a hallowed Pearl Harbor historic site.

Many Oklahoma sailors jumped overboard as the crippled battleship rolled over in about 50 feet of water. But hundreds were trapped below decks.

Thirty-two were rescued by intrepid crews who heard them banging for help, cut into the hull and made their way through a maze of darkened, flooded compartments to reach them.

Others managed to escape by swimming underwater to find their way out. Some trapped sailors tried to stem the in-rushing water with rags and even the board from a board game. One distraught man tried to drown himself.

A few managed to escape through tiny port holes - pushed by brave comrades who couldn't fit or were determined to let others go first.

Two who made that sacrifice were a Catholic priest, Lt. (j.g.) Aloysius Schmitt, the ship's chaplain, and the ship's dentist, Lt. Com. Hugh Alexander, who had been in the Navy 20 years.

Father Schmitt's corroded chalice and water-stained Latin prayer book were found in the wreckage. The book was still marked with a page ribbon for Dec. 8 prayers, including the Old Testament's Eighth Psalm.

how awesome is your name through all the earth!

I will sing of your majesty above the heavens

Neither Father Schmitt's nor Alexander's body was ever identified.

Mess attendant Octavius Mabine, who had been in the Navy only two years and whose mother, Essie, lived in Portsmouth, Virginia; Marine 2nd Lt. Harry Gaver Jr., who was born in Annapolis and whose father had taught at the Naval Academy; and Machinist Mate Eugene Eberhardt, of Newark, New Jersey.

Eberhardt has never been forgotten, said his niece, Joan Roberts, 78, of Rockport, Massachusetts.

"For years on Memorial Day we bring out his picture and toast him," she said in a telephone interview last week. "Everybody loves him, and we have loved him forever."

She still has the telegram his father got on Dec. 20, 1941: "The Navy Department deeply regrets to inform you that your son . . . is missing following action in the performance of his duty."

Similar telegrams went out across the country.

William Trapp, of La Porte, Indiana, likely got one, or two, about his sons Harold and William, both of whom died on the ship.

And Peter Barber, of New London, Wisconsin, may have gotten three, regarding his sons Leroy, Malcolm and Randolph, all of whom perished on the ship.

The youngest Barber brother, Robert, now 83, still lives on the family farm. He was 9 in 1941. His wife, Judy, said he doesn't talk much about it.

"It brings up really hard, hard memories," she said in a recent telephone interview. "It was a very tough time for the family. . . . If you lose one brother, maybe, but three at a time. It was very difficult."

No remains of the Trapp or Barber brothers were ever identified.

In the months, and years, after the attack on Pearl Harbor, the handling of the crew's remains was plagued by error, confusion and poor record keeping.

Most of the dead were found in the wreckage during the months-long salvage operation, especially after the Oklahoma was righted in 1943, according to a memo by DPAA historian Heather Harris.

By then the bodies had been reduced to skeletons.

"You have the remains that are in the water, they're in the ship, they're decomposing in place," said Debra Prince Zinni, a forensic anthropologist and a manager with the DPAA's main lab in Hawaii.

The water "really co-mingled the remains in the ship itself," she said in a recent telephone interview.

By 1944, the jumbled skeletons, saturated with fuel oil from the ship, had been buried as unknowns in two Hawaiian cemeteries, Harris's report said.

Three years later, they were dug up and taken to a military laboratory near Pearl Harbor for attempted identification.

The chief tool at the time was the comparison of prior dental records with the teeth of the deceased. Twenty-seven tentative identifications were made, but they were rejected as incomplete by the authorities.

Meanwhile, the laboratory, thinking most of the bones would eventually go into a mass reburial, arranged them in orderly groups, placing all the skulls in one casket, all the leg bones in another and so on, Zinni said.

But military officials rejected that arrangement and ordered the skeletons reassembled.

It was an impossible task.

The lab made an effort, collecting what looked like complete skeletons, wrapping them in bundles of white cloth, and placing the bundles in scores of individual metal caskets.

In 1949, the remains were formally declared unidentifiable. And by 1950 they had been reburied in the National Memorial Cemetery of the Pacific, often called the Punchbowl, in Honolulu.

There they rested for the next 53 years.

In 2003, researcher and Pearl Harbor survivor Ray Emory, now 94, used files he unearthed in the National Archives about one Oklahoma sailor to get officials to dig up a casket believed to contain his remains.

That sailor, Ensign Eldon Wyman, was duly identified, along with four others whose remains were in the casket. But extensive DNA testing revealed that there were also remnants of 90 additional people in the casket.

A second casket was unearthed in 2007 and remains within were also identified as an Oklahoma sailor.

The remains were returned to their families.

Following these discoveries, the Pentagon last April announced plans to exhume and identify the rest of the Oklahoma's "unknowns," now estimated to be about 388.

The project is enormous. Permissions and permits had to be obtained. Dental and medical records had to be found. Pre-war military chest X-rays, another comparison tool, were obtained.

DNA samples have been gathered from relatives of most the crew for comparison with DNA taken from the bones.

Retired Army Lt. Gen. Michael Linnington, who heads the DPAA, said he recently met in Maine with relatives of the Oklahoma's unidentified. "For them, they've been waiting for this for 70 years," he said last week.

The first exhumations took place June 8, and the last four caskets were dug up Nov. 9.

Sixty-one rusty caskets, still with their carrying handles, were retrieved from 45 graves.

All these years later, some of the bones still smelled of fuel oil, officials said. But the oil had inhibited the growth of bacteria and made the later extraction of DNA more successful, Zinni said.

The caskets were heavily corroded and had to be forced open with mauls and crow bars. Inside, most of the bones were found as they had been packaged years before - wrapped in bundles of heavy white cloth fastened with large safety pins.

Each casket, on average, contained five to seven bundles, but one held 21 and another 22, DPAA anthropologists said.

One contained nothing but upper arm bones. And, upon close examination, a single skeleton often was found to include bones from different individuals.

One had five examples of the same specific neck vertebra, indicating that five people were represented, not one.

Thus, the work of reassembling each sailor or Marine presented a huge series of anthropological puzzles.

"It is a very large task," Zinni said, and one that could take years to complete. "But we definitely have the techniques and the personnel and the capacity to take this project on. And that's why we're doing it now."

Two weeks after the attack, investigating officers estimated that the Oklahoma had been hit by at least nine enemy torpedoes and grazed by several bombs, according to reports in the National Archives.

It had capsized in about 10 minutes.

Of those killed, only 35 were recovered and soon identified. Some had drowned or been severely burned, the records state.

And some had suffered other injuries, such as skull fractures, to which their bones still attest, Zinni said.

After the remains were exhumed recently, they were cleaned and photographed, and most of them were flown to the DPAA lab here for further analysis. Skulls were retained in the lab in Hawaii, where forensic dentists are based.

By sheer coincidence, officials said, the lab here is housed in the cavernous World War II airplane factory that built the "Enola Gay," the B-29 that dropped the atomic bomb on Hiroshima at the close of the war in 1945.

Thus far, the DPAA has made seven identifications, a spokeswoman said last week. But officials are still reaching out to family members, and no identifications have been publicly announced.

As for the ship, after it was righted, its guns were removed, and it was decommissioned in 1944. Considered beyond repair, it was sold for scrap.

As it was being towed to a California scrapyard on May 17, 1947, the stripped-down vessel capsized again and sank 600 miles northeast of Hawaii.

This time no one was on board.