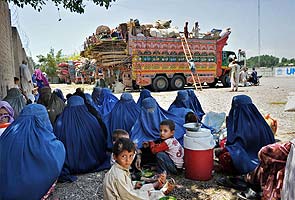 Kabul: Hundreds of thousands of Afghans face the threat of deportation back to their war-torn country from Pakistan once a deadline expires tomorrow, but Kabul is crying foul over the move.

Pakistan is home to 1.7 million refugees and hundreds of thousands more unregistered migrants from its neighbour, according to the UN High Commissioner for Refugees (UNHCR).

But Islamabad says it cannot be expected to tolerate illegal migrants, and 400,000 undocumented Afghans in Pakistan's northwest province of Khyber Pakhtunkhwa, where the bulk of the Afghan community live, face the imminent prospect of removal.

The UNHCR describes the situation of Afghans in Pakistan as the "largest and most protracted refugee crisis in the world" and warned that the question of how to deal with it was becoming "increasingly politicised".

Mian Iftikhar Hussain, Khyber Pakhtunkhwa's information minister, said law enforcement agencies have been told to compile lists of illegal Afghans and once the June 30 deadline passes, orders will be issued for their arrest, appearance in court and subsequent deportation to Afghanistan.

"No country allows illegal immigrants, how it is possible to legalise something which is illegal?" Mr Hussain said.

"We have been accommodating Afghan immigrants for 32 years. The provincial government cannot take their burden any more. They should go back to their country."

But Afghans are nervous about welcoming home so many jobless, impoverished people to a country where returnees have in the past struggled to find work and roofs over their heads.

The government in Kabul denied the expulsions would take place.

Afghan refugee ministry spokesman Islamuddin Jurat conceded there was a "small problem" in Khyber Pakhtunkhwa, but said the two sides had agreed to solve the issue and give the Afghans "some legal status to stay there".

The Afghan-Pakistani border is notoriously porous and even if the deportations were to go into effect there would be little to stop returnees going back to Pakistan.

Pakistan, where the economy is also depressed, says it cannot be expected to tolerate illegal migrants.

Mr Hussain claimed that illegal Afghans were involved in crime, although experts have dismissed such accusations as an excuse to rid the country of the immigrants.

At the heart of the problem is deep distrust between Afghanistan and Pakistan.

Each country blames the other for Islamist violence, with both sides accusing the other of sheltering Taliban insurgents on either side of the border.

Pakistan has already carried out some deportations, albeit on a much smaller scale. Between December 2010 and February 2011, some 1,400 Afghan families were sent home from Pakistan's semi-autonomous tribal belt, according to the International Organisation for Migration.

It said Afghan and Pakistani officials had agreed to offer "safe and dignified repatriation" to 7,200 families, or around 50,000 people, from Pakistan, if funding can be found.

"At the Chicago summit, we heard how the situation is improving in Afghanistan. If that is the case, then voluntary return should be natural," said Ms Khar.

But the prospects for Afghans returning home are grim. Apart from the 10-year Taliban insurgency, they face trying to support themselves in a weak economy that is likely to suffer further when NATO forces leave by the end of 2014.

Since the US-led invasion in 2001, around 5.7 million Afghan refugees have returned to their home country, many living in destitution.

The UNHCR's strategy for Afghan refugees in 2002 was the biggest mistake the organisation ever made, Peter Nicolaus, the body's head in Afghanistan admitted in December.

Promoted
Listen to the latest songs, only on JioSaavn.com
He said the international community had failed to help returnees find a means of earning a living and therefore reintegrating into society.