A Man Killed A Couple With A Knife, Shot Their Baby And Buried Them All In The Woods, Police Say

Drew Atchison has been charged with one count of child kidnapping and three counts of first-degree murder in Missouri. 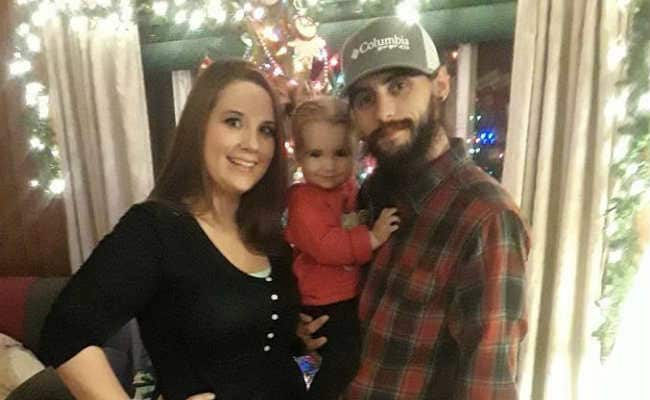 The couple and their child were buried in the woods (Facebook)

No one had heard from them in days.

Harley Michael Million, Samara Fontaine Kitts and the couple's 17-month-old daughter, Willa, were reported missing from their home in southeastern Missouri, not far from the foothills of the Ozarks.

When deputies with the Wayne County Sheriff's Department arrived at the family's home in the tiny town of Mill Spring, there was no sign of them - only clues to a tragic end.

Days earlier, deputies had discovered Million's pickup truck in a neighboring town, with blood stains in the bed. Now evidence at the house led them to believe someone may have been killed, according to a probable cause statement.

In time, authorities would find all three of them - buried in the woods in a crude grave made from blankets and trash.

Authorities said they had identified a suspect, 24-year-old Drew Atchison, who reportedly told them he went to the family's home Thursday and slit the couple's throats, then returned later to kidnap and kill their child.

Exactly why Atchison may have killed is unclear: The probable cause statement doesn't mention a motive, and Wayne County Prosecuting Attorney Michael Jackson said he could not comment on the case because it is still under investigation.

Atchison has been charged with one count of child kidnapping and three counts of first-degree murder, among other crimes, according to court records. In Missouri, first-degree murder carries a maximum penalty of life imprisonment or death.

It was not immediately clear whether Atchison has an attorney in the case.

Deputies were first called Friday to a home in Williamsville, less than 15 miles from the family's home in Mill Spring. There, they discovered Million's 2004 Chevrolet Silverado and blood in the bed, according to the court documents.

The Wayne County Sheriff's Department identified the three victims in a statement Monday and said authorities were investigating a triple homicide.

During the investigation, Million's mother told authorities that her 24-year-old son had received a text from Atchison's brother. When authorities spoke with Atchison, he "confessed to killing Million and Kitts while at the residence by using a knife to slit their throats," according to the probable cause statement. "He then placed their bodies in the back of Million's truck and went back inside."

The court documents state Atchison told authorities he then locked the couple's young daughter in a room with the dogs and went home, leaving her overnight.

The next morning, authorities said, he returned to scrub the scene. Police said he put the child in the truck with her dead parents, drove them into the woods and then shot and killed the child.

"He then took [the child] out of the vehicle," according to the probable cause statement. "He eventually held her in his arms, with her facing away from him, and shot her in the back of the head.

"Atchison admitted to investigators he shot the weapon three times. On the first shot, the weapon malfunctioned. On the second shot he missed the child, and the third shot struck her."

Authorities said Atchison admitted that he hid the three bodies and drove the pickup truck to his own neighborhood in Williamsville, covering it with tarps, according to the court documents.

"They were a loving family and amazing parents to Willa," relatives said in a statement to CBS affiliate KFVS. "They weren't married, but they had been together for the last eight years, since high school.

"They both have large families who love them very much and a large circle of lifelong friends."

The autopsies were scheduled for Tuesday morning.

Promoted
Listen to the latest songs, only on JioSaavn.com
Atchison is being held without bond. His court date has not been set, according to court records.